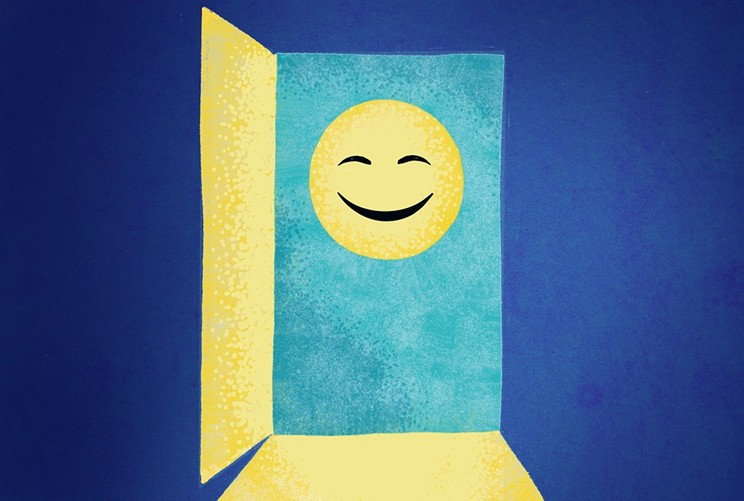 Joe Newton
Get out of the house, do shit, go places, meet people—it’s standard advice because it’s excellent advice.

Wallowing after a breakup is fine, but the way to really get over it is to get out.

Q I have a friend who is a trans man. Recently he just got out of a shitty relationship. His ex suddenly lost interest in him and wouldn’t work with him on fixing it. He’s heartbroken. He told me women often reject him once they find out he is trans and he’s tired of endless rejections. We met in the college town where he still lives, but our entire friend circle (including me) has moved away. Even without the trans part, it’s not easy to be a 30-something single man in a liberal college town. He’s convinced he’s doomed to be alone.

I don’t want to be dismissive about his experience as a trans person (I’m a cis woman), but I keep trying to walk the fine line of encouraging my friend to reach out, meet people through community events, volunteering, etc. He also mentioned to me that people our age (thirties) are more transphobic than younger people, but he doesn’t want to be the kind of 30-something perv who dates people in their twenties. My heart aches for my friend. Do you have any advice for him to make more friends and/or find a new romantic partner?
—Friend Really In Extreme Distress

A The only thing worse than being dumped by someone who refuses to “work with you on fixing it” is being dumped by someone who already made up their mind to dump you—meaning the relationship was already dead—but then wasted months or years of your life pretending to work on it. So, if your friend’s ex knew it was over, FRIED, they did your friend a favour by refusing to go through the motions of “working on it.”

As for dating while trans…

I’ve visited a lot of liberal college towns, and they tend to be more welcoming and accepting places for trans people than, say, your average Alaskan fishing village. And most women—cis or trans—aren’t going to wanna fuck or date with your friend. (And he is open to dating trans women, right?) I’m gay, and most men—cis or trans—don’t wanna sleep with me. Now, men who find me attractive don’t reject me once they realize I’m gay, but being rejected by a woman who initially found him attractive after he discloses that he’s trans? That rejection is gonna sting more. But your friend can avoid that kind of rejection by disclosing right away.

My friends with HIV who don’t wanna deal with the drama of having to disclose and being rejected for it put it out there right away. Since your friend is eventually going to have to come out to the women he dates, putting the fact that he’s trans on his dating profiles—disclosing it right away—tells women who might have a problem with it to keep moving. In other words, FRIED, your friend has the power to flip the rejection script by essentially saying, “I’m trans and if you’re not open to dating a trans man, please show yourself out.” Instead of waiting to be rejected by cis women who won’t date trans men, he’ll be rejecting those women first.

If grown-ass adults in their twenties want to date him, your friend should date them. Refusing to date someone due to something they can’t control or change about themselves—their age—seems discriminatory (ageist!), patronizing (people in their twenties are adults!) and in your friend’s case, hypocritical (he doesn’t enjoy being rejected over something he can’t control or change). But my hunch is that your friend is just making excuses. Give him a little more time to wallow, FRIED, keep urging him to do the obvious (get out, go places, do shit, meet people), and in a few months your friend will be introducing you to his new partner—and it’s probably going to be someone in their twenties he met at a community event who later saw his profile on Tinder and swiped right on his openly trans ass.

This week on the Lovecast, it’s a homo takeover with Willam and Alaska from Drag Race.

Q You recently posted a letter from a woman who was dating an "age appropriate" man. Could you please define that phrase for me? I am a 65-year-old straight white guy. Twice married, twice divorced. I was once told that a guy could divide his age in half, and then add the number 13 to that number to get the minimum age for a potential partner. I don't know where those numbers came from but using that formula, I come up with a minimum age of 45. I am open to dating women my age, or older than me. But so far, my contacts with older women have not led anywhere. I guess the bottom line is that these days I find myself attracted to younger women. That’s all there is to it. So, I am hoping to get some guidance from you on this subject.
—Aging Gentleman Enquires Sincerely

A Oh, wow—one of those rare older men into younger women. Don’t see your kind every day. Fuck, marry or keep any consenting adult who’ll have you. Be realistic about your prospects (twice divorced and getting up there), AGES, and make a conscientious effort to control for dickful thinking, i.e., the kind of wishful thinking men of all ages engage in when their dicks are hard. Also, don’t be cluelessly coercive.

Q I’m a 30-year-old straight, cis woman and I've been in a serious relationship with my boyfriend for a year. I love him and the sex is mind-blowing when it happens—which is about twice a week when I'm not spotting. We can only have sex when he initiates, but there’s more. I'm on the pill and I often spot a little from the second week to the moment my period comes, a side effect with which I am okay. However, if any blood is present, nothing can happen since he's disgusted by it.

He won't have anal sex because he's disgusted by feces. He won't play with me and a toy when there’s blood present, even a drop, and he won't go down on me at all, as he doesn't like it. He also doesn't want me touching myself when I go down on him, as he finds it distracting. Opening the relationship is not an option for him. It seems to me that anything that does not revolve around his penis penetrating something and coming out perfectly clean is a turnoff for him. While I feel hurt, I also wonder if I'm being abusive by asking him to do things that he doesn't like to do. When I bring up the topic he insists this is my problem, not his. Is there a way forward?
—Frustrated About Intimate Life Under Restrictive Edicts

PS: Is he a product of the patriarchy or am I insane?

A There’s no way forward, FAILURE, there’s only a way out: DTMFA. If you’d like to present your soon-to-be ex-boyfriend with a lovely parting gift, FAILURE, I suggest getting him a toaster and a Fleshlight. Duct tape them together, leave them on your side of the bed, take your shit and go. Because it’s a warm, silent hole your boyfriend wants for a partner, FAILURE, not a woman with a fully functioning suite of female reproductive organs, to say nothing of a woman with needs, wants or desires of her own.

I strongly suspect your ex-boyfriend won’t miss you or your vagina that bleeds or your ass that poops or your mouth that opens and asks for perfectly reasonable things, FAILURE, and I’m confident that even if you miss him at first, you won’t miss him for long. Because within a week you’ll realize being alone is better than being with a selfish piece of tyrannical shit.

Yeah, yeah: You love him. You’d pretty much have to love him—or you’d have to convince yourself you loved him—to put up with his shit for a week, much less a year. But the longer you stay in this relationship, FAILURE, the greater your frustration and resentment will grow, and a day will inevitably come when you’re no longer in love him and what’s left of your self-esteem, self-confidence and sense of sexual agency will have been destroyed. Don’t wait until the love is gone and the damage is permanent to leave this asshole. Leave him now.

PS: I don’t know if the patriarchy made your boyfriend the asshole he is, FAILURE, but it’s definitely the patriarchy that has you doubting your own sanity.