As Hurricane Dorian makes its way to Halifax, surfers and the city prepare

Big waves and bigger winds will arrive on Saturday 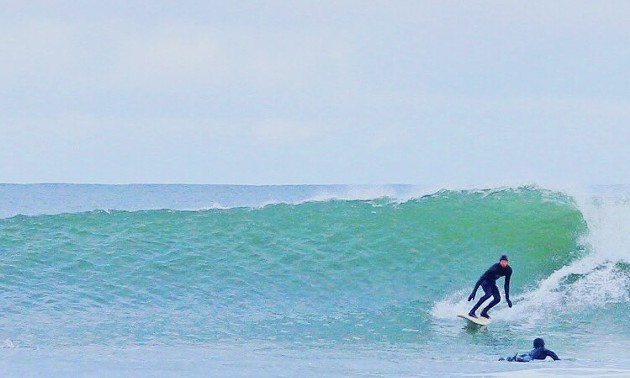 Batten down the hatches, stock the pantry and hold on to your hats. While Haligonians prepare for Hurricane Dorian, which will likely be a category 1 storm by the time it hits the shores of Nova Scotia on Saturday evening, the province’s surfers are keeping an eye on swell reports.

“Hurricanes bring the big waves,” says musician and surfer Rich Aucoin. He joined many surfers along the province’s southern coast on Friday morning to make the most of the coming storm, before it touches down at full strength on Saturday, where the clean waves will give way to a “messy, violent looking ocean.”

As of Friday afternoon, the wind had already changed, so surfers will have to wait until at least Sunday morning for the good waves—which Aucoin says could be twice as tall as him at their highest.

Environment and Climate Change Canada’s warning preparedness meteorologist Bob Robichaud, warns that they do expect some very high waves, “but those conditions can be extremely dangerous.”

He adds that Nova Scotians will feel the storm’s high winds on Saturday morning, and the worst of the storm is expected to hit overnight on Saturday.

“We're looking at a fairly nasty, late afternoon over much of the southern Maritimes,” Robichaud says.

The strong winds on Saturday will keep the surfers out of the water, and also mean many other things in the city will be shut down.

Halifax Transit has suspended bus and ferry service from noon on Saturday until at least noon on Sunday. (This means all shows for Halifax Fringe Festival are cancelled on Saturday, too.)

Halifax Regional Municipality is also asking residents on the south shore to “consider other accommodations” during the hurricane. Saying the waves could reach heights of 15-metres—surely high enough to knock your sailboat out of the water.

But Robichaud says the storm is luckily going to be coming to land at low tide, for at least the Eastern Shore area, which should help mitigate some of the potential damage.

Robichaud expects a lot of the damage to be fallen and uprooted trees and Nova Scotia Power is mobilizing extra staff—who, please remember, aren't to blame for the outages, Emera Inc. is—to deal with the damage and outages.

Lots of events around the city have been postponed and cancelled, even Parks Canada has closed Kejimkujik National Park and National Historic Site for the weekend. Essentially, everything is closed and you should just stay home.

The provincial government says Nova Scotians should have enough supplies to last at least 72 hours from the storm's arrival—so hopefully you have enough peanut butter to carry you over until Tuesday at noon. (If you've left your supply gathering until the last minute, read this.)

Halifax has been keeping an eye on Hurricane Dorian since it lashed the Bahamas earlier this week, in an uncharacteristic hover over one spot. Hurricanes typically keep moving but the pause has led to at least 30 reported deaths so far and huge amount of damage to property and homes.

Starting at noon on Saturday, The Red Cross will be opening three evacuation shelters for anyone who needs a safe place to stay. One at the Dartmouth East Community Centre, one at the Canada Games Centre in Clayton Park and one at St. Margarets Centre in Tantallon.