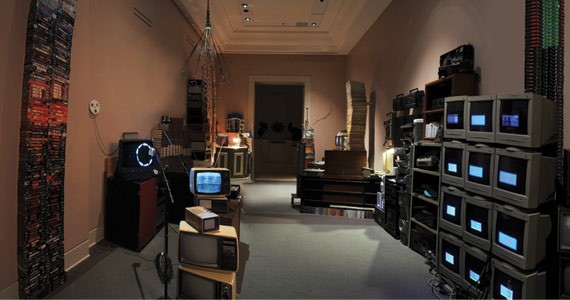 A look at 2009’s Obso-less-sense, shown at the Art Gallery of Nova Scotia.

Collectors understand how all-encompassing their habit can get. It starts off innocently enough, but soon records, clothes or crystal unicorns become something to pine over.

Themes of collection and repetition run throughout Eleanor King's Sobey Art Award exhibition, opening October 24 at the Museum of Contemporary Canadian Art in Toronto. King represents the Atlantic region for the 10th anniversary of the Sobey Art Award, where one artist from a shortlisted group of contemporary Canadian artists from all over Canada, announced at the gala event on November 16, takes home $50,000.

An Atlantic artist has yet to win the Sobey, and King's thoughtful and engaging exhibition pieces, featuring some re-imaginings of older pieces and brand new work, may well change that. Expanding on a component in 2009's sculptural installation at the Art Gallery of Nova Scotia Obso-less-sense, King has amassed "probably around 13,000 records" which were then painstakingly removed from the sleeves, a quarter-inch hole was punched through the sleeve, the records were put back and then threaded onto an aircraft cable, sleeve and all. If the image of discarded LPs seems familiar, it could hearken back to the Maritime Conservatory's recent house-clean, in which 10,000 records were tossed into a dumpster. King didn't partake this time---she has gathered her records over the years from various sources.

The sadness some Haligonians may have felt thinking about those discarded records is also reflected in King's work. "The piece I have is a weird sad thing to me, some people have asked me questions about it being an archive, and about the compulsion to archive," says King. "But it's more of a collection. It becomes an archive because it's peoples' detritus. All these choirs, Christian bands or whatever and their hopes and dreams are just thrown aside."

Music continues to be a compelling theme in King's work. She will show a piece created for Warming Up (at the Confederation Centre Art Gallery last spring) called Endless Practice, where a column of kick drums is paired with a sound component, a recording of King drumming. "I was also making the sound of the drumming intentionally kind of bad, thinking about how it's infinitely more interesting being a band practicing rather than listening to a band practicing," says King. "I am one of those people who practices drums in my basement in my neighbourhood and probably annoys my neighbours. I thought it would be nice to relate the two formally, especially to music."

Music plays a large role in King's life--- she performs with Wet Denim, who will be playing in Toronto during the Sobey events.

The award ramps up interest in contemporary Canadian art from the entire country, something that happens far too rarely, especially for our region. "I'm happy that the show is in Toronto because I haven't had a lot of experience there," says King. "There are a lot of people interested in what you are doing all of a sudden, it gets your name out to a wider audience, and it's a national audience. But it is difficult to make that kind of work with that expectation of yourself, knowing the expectations of the exhibition. I've never really felt that way before. The stakes feel kind of higher."

King has gotten another exhibition from being on the shortlist, at the Southern Alberta Art Gallery in Lethbridge in December, but some of the biggest benefits have come from home. "It's also nice to be recognized here, while I have had a lot of support in the community, a lot of people sort of know you are here but they maybe don't have a sense of your work or what it is, maybe people who didn't take me seriously before can see the type of work I do and look at it a bit more," says King. "It's like opening for a big band--- I'm working in relative obscurity and now everyone is going to see it."