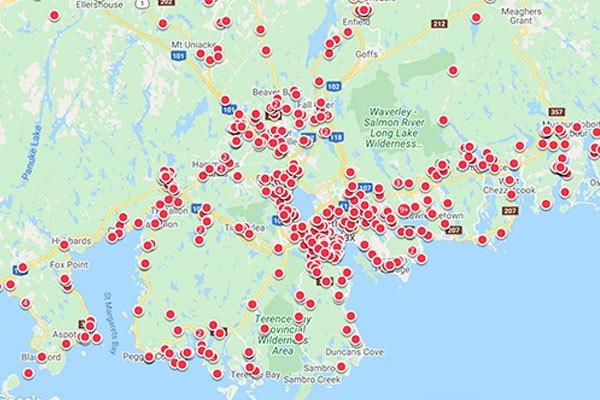 Houses and land currently for sale in HRM. ZILLOW.COM

Are you a house-hunting millennial? Better sharpen your pencil

Halifax’s high-demand low-supply housing market is driving sellers to choose buyers based on more than just their bid.

Hopeful first-time home buyers in Halifax are writing love letters to staircases and fireplaces, French windows and quirky out-dated salmon-coloured bathroom tiles. All in the hopes of increasing their chances of being the successful bid on a mid-range house in Halifax.

Because in case you hadn’t heard, HRM’s housing market is hot hot hot right now. And not just it’s-November-after-Covid-and-the-Ontarians-want-in-on-the-ocean hot. Realtor Margaret Craig describes it as a “perfect storm” happening: There are some out-of-province buyers, low interest rates, rents are becoming unaffordable, construction is slow because of labour shortages, the process for new development permits is slow, plus a lot of the people looking to buy homes don’t already have one to sell.

Tara MacDonald, a 30-year-old who works in e-commerce, just spent eight months looking for a first home in Halifax for her and her partner. They went to over 50 showings, put in eight offers and snagged a dream home in the city last month. One they cinched, not because she and her partner were the highest bidders, but because of the contents of a written letter about why they should get the house over the other bidders.

Craig says that a couple of years ago, more than 10 offers on a home would be very unusual–an anomaly even. But now, especially in the bottom half of price points–$350,000 and below–it’s “almost expected” to have that many offers. In January a home in the low $200,000 price range in Sackville had a whopping 37 offers.

Huge demand with low supply breeds offers well over the asking price–MacDonald’s bungalow in Halifax sold for $86,000 over asking. The latest report from the Nova Scotia Association of Realtors says in Halifax-Dartmouth, the average home sold in February 2020 was $328,821. This year, the average price was up 37 percent to $450,562.

Huge demand with low supply also fuels stiff competition. The Coast asked our followers on Instagram their experiences trying to buy a house in HRM in the last year, and their stories were similar to MacDonald’s–with some folks giving up before finding a home. They told us about unbelievable competition, getting outbid over and over. Buying a house within 18 hours of it being listed with four offers going in during that time. “It’s an absolute gong show right now,” said one response.

MacDonald says that as her house hunt wore on, she’d start seeing the same faces at viewings. It “really put a face to how competitive” things were, she says. “It’s kind of weird to see people hot on your tail.”

And so the letter writing becomes even more intense, even “emotionally taxing,” she says, “to be writing about, like how much you want this house, and then still not get it,” about a house she and her partner didn’t get–even though they were the highest bid.

Craig, who was MacDonald’s realtor, said that delivering the news about that home was heartbreaking.

“It's one thing to sort of be like, ‘OK someone outbid me because of money,’” says MacDonald, “but it's also another thing to know, maybe just your letter doesn't resonate with the seller.”

In that instance, MacDonald said she and her partner wrote about everything they loved about the home, “its unique characteristics.”

Since October, Craig has had three buyers get a house when they weren’t the highest bidder. “I think it has a lot to do with the letter that you're including,” she says. “And it's being able to make the connection with the seller,” whether they think you’d be a good fit with the neighbourhood or share some other personal connection with the buyer. Sometimes it’s just that the letter tells the seller that this buyer will be most likely to follow through and finalize the sale, so the house doesn’t have to go back to market. Right now, sellers have all the power.

How they use that power is a whole other issue. A high-cost market is already hard for people to break into; when sellers can make value judgments about potential buyers, an exclusive market risks turning into a private club. The Fair Housing Act in the US means some cities and real estate associations frown upon the use of personal letters because of their potential for creating or reinforcing biases. But in Halifax, buyers have to play the game.

“On the one hand,” says MacDonald, who was first burned and then rewarded by this letter-writing gambit, “it's kind of an interesting one because you're sort of like, I can't believe a letter can determine your outcome. But on the other hand, that's really nice to know that there's still sort of like some humanity in the house search right now.”

That being said, she adds, “the letters are like in addition to well well well over asking price.”