Halifax's Side Door is "hoping to be a life raft for artists" during the pandemic. 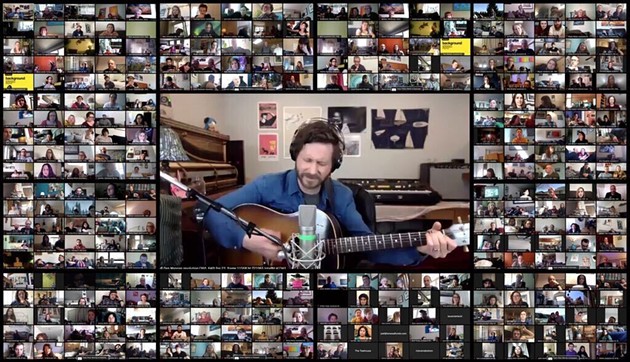 Mark Busse photo
The "crowd" at one of Dan Mangan's virtual Side Door concerts.
Open Instagram these days and chances are that you’ll see performers broadcasting live into the online world from their homes. Those shows are usually free. For many, live music online has been a light during these tough days. But, at the same time, they can be read as a sign of longstanding rot in the music industry: Shows cancelled, tours called off and 2020 festival merch all but vintage adds up to thousands in lost revenue for artists. It also signals that touring—one of the last way for musicians to make money in the streaming age—isn't enough to build a business model off of.

But don't break out into a sweat just yet: a Halifax-based concert venue matching company is here to help. Side Door is an online platform that started out matching musicians with hosts for intimate concerts (imagine AirBnB but, instead of vacationers renting room, it's connecting musicians with alternative venue owners). Now that the whole concert idea is off the table, the company has pivoted online, putting a new spin on e-concert experiences and offering a platform that could help musicians and concert promoters stay afloat in these wild times.

In February, Side Door’s co-founders, Laura Simpson and Dan Mangan (yes, the OG house show king), had been looking down the barrel of a summer stuffed with concert dates for musicians who booked shows in barns, warehouses and living rooms across the country using the site. In early March, of course, that all changed. As news about the pandemic took over, Simpson and her team spent days on the phone with artists —23 had shows planned at around 750 venues—helping them cancel performances and effectively flush projected revenue down the drain.

A new project linking Canadian musicians to gigs at Austin’s SXSW festival was also canned. “It was a lot of work and a lot of money that we put into it,” says Simpson, who’s been a heavyweight in Nova Scotia’s music curation scene for years, “and it just kind of like…. died.”

On that same, now infamous, date—March 13th— Mangan and his band rolled up to the second night of a two-day show at Toronto’s Danforth Music hall. The first night, the 12th, was electric, Mangan says: “It was magic, it felt like the last night on earth.” And it kind of was, in a sense. The last night on an earth where you could watch live music next to friends at crowded bars—at least for the time being.

On the second night, the crowd didn’t come. And no wonder too, as the concert was cancelled and Canada’s rolling shutdown began in earnest. But Mangan and his band played on. “It was more rewarding than I could have hoped for,” he recalls. He put the concert online. Watching it, you feel his voice echo through the empty hall as his band plays with verve and energy you’d expect seeing in a packed festival.

About a week later,  Mangan hosted a second online show on Zoom—just him this time—with the proceeds of online tickets going to COVID relief. He’s since dubbed these weekly performances #quarantunes. “Everyone turned on their videos, they were all singing along, sitting there with their families and their dogs,” says Simpson. “I was in tears.” The ticket-for-Zoom-password access that Dan tried just...Worked. And worked well. So, Side Door leaned in, hard.

Almost a month later, Cindy Thomas spent Saturday afternoon in Dan Mangan’s living room. She was there along with hundreds of others—from across Canada and beyond—without having to leave her couch or disregard physical distancing safety measures. “Seeing the live streams has been great, but Side Door definitely elevated the experience,” says Thomas, who lives in London, Ontario. “Using Zoom was kind of fun, you can see other people in the 'audience'.”

And those audiences have shown up, says Simpson. The take home for Side Door artists has more than doubled compared to the pre-COVID, physical home concert system the company had in place. Most shows, she adds, earn the performer an average of $1159 (as of early April). “What is really promising is that people are buying tickets, and they're coming back,” says Simpson.

Side Door shows are selling quickly. Simpson says a ticket cap ensures they still feel special. A recent set by Sarah Slean, for instance, sold out—leaving one Instagram commenter wondering how a virtual show could run out of seats.

But that's the formula Simpson says is working so well: Creating shows where the audience “shows up” to intimate performances. “There’s something when you buy a ticket. You’re saying there’s going to be value here,” she says. “It’s not a passive engagement.”

“We’re hoping this is a life-raft for artists and the industry at large,” adds Mangan.

But it’s still online. Through a screen. Does that distance damper the live experience? Mangan doesn’t think so: “In some ways it’s weirdly more intimate, in that you have 700, 800 people and they all have front row tickets.”

He says the performances don’t feel like he’s playing music into the internet abyss. He’s playing to people right there, in front of him. Families, kids playing with robot toys, dogs wagging their shaggy tails from coast to coast and beyond in a whole new concert dimension.

Laura Simpson adds she tries to watch every concert on the platform, in between days spent on Zoom with other side door staff and artists—and getting “hundreds” of notes about how Side Door performances have impacted people.

“It’s more than a distraction,” Simpson says. “It’s so meaningful for people to find solace in art.”