The Grammy winners are on the job, this time clocking in at Alderney Landing. Tara Thorne devises the difference between you and them. 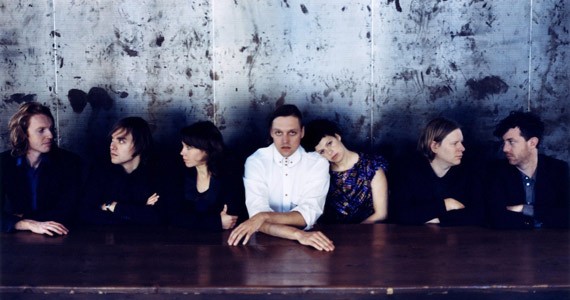 Arcade Fire is a band like any other band. Except:

Arcade Fire make a fine living, because they self-record and own their studios and their masters and two of their three records have been insanely successful by indie-rock standards. Your band and all the people in it are broke.

Arcade Fire know Bruce Springsteen and David Bowie. Your band does not.

Arcade Fire won a Grammy. Your band did not.

Arcade Fire travel a lot, in a bus usually, and play shows for people. Their many members, except for Win Butler and Regine Chassagne, who are married, are constantly away from their significant others; from home (Montreal); friends' weddings, new babies and album release shows; their favourite latte place and, likely most notably, their beds. Their music is their art and their art is their job, and as much as artists want to make their art their job, the thing about all jobs is that they suck sometimes---one girl's repetitive stress injury is another's sleepless overnight drive from Fredericton to Toronto.

Richard Reed Parry's job today is to talk to journalists in 15-minute intervals on the phone from France, where it's 9:30pm, a full five hours ahead of the time zone he's calling into. And the phones he's using aren't working. They are crackling out and then dying because he's backstage at another summer festival and there are too many cellphones jockeying for the surrounding airwaves. He changes location, it's better "by the buses" reports his publicist, just before the line goes dead again. A couple of minutes later---a Canadian phone to the rescue---and the genial ginger, who plays many instruments in Arcade Fire, including double bass, keyboards and accordion, is coming across the Atlantic clear as a rack of bells, three hours to go before the band's headlining slot at Festival les Deferlantes in Argelès-sur-Mer.

Arcade Fire is one of the biggest bands in the world. Some people didn't realize it until they won the Grammy for Album of the Year for The Suburbs (Who the Fuck Are Arcade Fire? asked one Tumblr), and you won't see any breathless stories about Arcade Fire superfans on the local news ahead of this weekend's U2 show in Moncton, which is where the band will go to open after headlining its own stage at Alderney Landing on Thursday, but it's hard to remember a time when they were not this big.

They first played Halifax mere days ahead of Funeral's release, steamrolling in on the most insane buzz this town has ever seen---and it was happening now, when it was happening everywhere; that never happens---and playing to a fire code-busting Marquee audience at the Pop Explosion, back when they used to hammer on each other's helmeted heads, in 2002. Two thousand and two. In a Gilmore Girls episode, Rory uploads CDs for Lorelai: "Do you want the Arcade Fire?" Lorelai: "Do I?" Rory: "You do." That was 2004. They've been at this more than a decade, and yet to some---the average U2 fan, if we must choose---it's like they fell out of the sky a fully formed stadium-ready band.

"It's funny how your perception shifts as you go along. We're playing these huge shows all the time now, and that happened so incrementally, step by step, that it doesn't actually seem weird or super alienating or isolating playing these huge shows," says Parry. "These 10- or 15,000-person shows that we're playing regularly---that's our own shows, not festivals---start to seem regular, and when it's 7,000 or 8,000 people you're like 'Oh, what a nice little show that was.' It's funny to hear yourself saying that, but it truly does, the way you feel about the thing adjusts as you go on---I think cause you have to adjust to how you relate to it. You can't go from zero to Stadium and not lose your mind, I don't think."

(How does the biggest line in "Wake Up" go? "I guess we'll just have to adjust.")

To help bridge the gap between the sevenish of them---the numbers fluctuate, but seven is the core---and those thousands of people they play for regularly, Arcade Fire put on a full stage spectacle; you may have seen video from their Coachella finale, in which LED balls were dropped upon the crowd, like huge solar garden orbs.

"This is the first time we started with a lighting designer and a set designer from the beginning, to design a stage that has a cohesive specific look to it," says Parry. "You tweak it as you go on, generating ideas. It's like doing theatre---you're working on all these different aspects of the show all the time and the primary thing is to just play the songs well."

The songs, this round, are a heavy selection from the year-old concept record The Suburbs, 16 songs that sprawl like the titular neighbourhood design, plus choice cuts from Funeral and the sophomore Neon Bible. "We sort of have a core of, kind of a backbone of songs that the sets are built on," says Parry "It kinda grows over time, but you have the hits"---he chuckles self-effacingly---"I use the term loosely---and we have a larger rotating cast of staple songs that we play and we kind of add songs as we go along, because we get more and more bored with ourselves."

(Brace yourselves, bands, because this part is going to sound just like your life.)

"Cause you know everyone gets bored with their job---they do it, try to expand it and do new things." Parry's favourite song to play right now---three weeks before the Dartmouth show---is the B-side "Speaking in Tongues." "It's brand-new, it's been really fun to play that because we didn't really rehearse it at all, we just said 'Let's learn how to play it by playing it for people,'" he says. "It's nice to feel kind of a bit rickety and a little raw and not sure of what you're doing on stage sometimes. It makes you feel alive."

The band has been on tour relentlessly since The Suburbs' release last August. The night after their Grammy win, in Los Angeles, they played an awards show in England. (That's where, again, they're a bit different from other bands.) Anybody clamouring for a follow-up is going to be waiting awhile---there's no writing on the road. "It's like heads down, we're just trying to keep healthy and keep sane really at this point in the game," says Parry, who also plays in Bell Orchestre with AF mate Sarah Neufeld. "Once you get to a certain length of the tour, you're really just putting your shoulder to the wheel and getting the job done."

"Any kind of comfort of home that you can manufacture for yourself you tend to be pretty grateful for on tour," he goes on. "A lot of cities we repeatedly play, we'll be in the same place every time---you find the awesome coffee or the awesome cute restaurant, that little spot with the great swimming pools or whatever. All these little things that make your life a little bit more manageable even though you're living on a bus.

"I try and find swimming pools wherever I go, I'm a swimmer---it keeps me sane and healthy. It depends on the city, also---you can only do so much wherever you are."

So look out for tall redheads at the Sportsplex on Thursday, and then it's off to Moncton for the biggest existing rock spectacle. "They're really personable, nice folks---just in an insane position," says Parry. "I feel like our band is just personable, nice folks in an insane position, but U2 is 10 times more insane and has been going on a lot longer. They're just people who have worked really hard at what they do and created something bigger than themselves, and they just try and keep doing that the best they know how.

"Try and change it and let it evolve, but also let it be what it is all the time. Just letting something be what it is artistically, over a long period of time, and continuing to do it, it's a really hard thing to do."

Arcade Fire is a band like any other band. Except.

Tara Thorne is copy chief at The Coast. She grew up in the country, but could not write 16 songs about it.