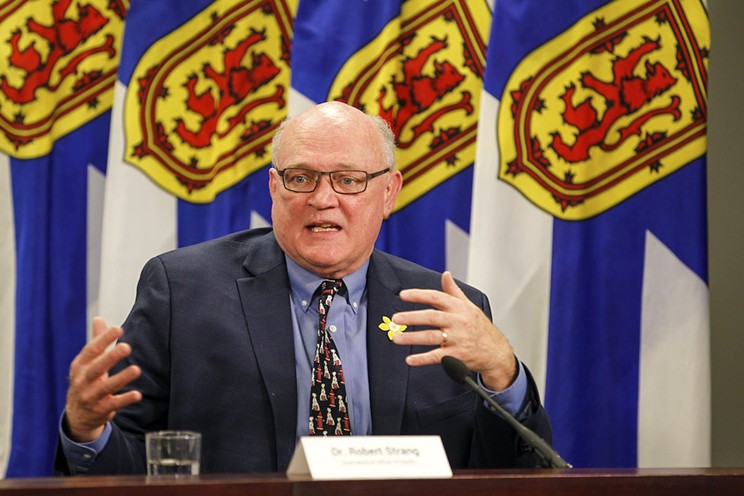 “If you have not yet booked yourself or for a loved one, please do so,” urged Robert Strang at the April 1 COVID-19 briefing. COMMUNICATIONS NOVA SCOTIA

Anyone over 70 can now register for a vaccine

Strang opens bookings for this age group earlier than anticipated.

It’s not an April Fool joke, although for some people it will sound too good to be true. Starting April 1, any Nova Scotians over age 70 are eligible to book their COVID-19 vaccine appointments online or over the phone. Before today, only those 75 and older in the general population could get the Pfizer or Moderna vaccines.


“If you have not yet booked yourself or for a loved one, please do so,” Strang said Thursday. “There are appointments available all over the province and we will keep adding additional appointments as required.”


The vaccines going out next week will primarily be part of the 14,200 doses of Moderna that Nova Scotia received this week, a few days later than expected.


There will also be more vaccine clinics for the AstraZeneca shot, which currently is available for Nova Scotians aged 55-64. Another 38,800 doses of AstraZeneca will be arriving next week, and appointments can be booked starting Tuesday April 6. Strang said in total, 25 percent of 55-64-year-olds will be able to get the AZ shot.


“Today is the last day that clinics are running for our initial AstraZeneca,” Strang said. “Appointments were fully booked for the initial 13,000 doses of this vaccine, and I hope that this continues as we get more.”


This means right now the only people over 55 who can’t register for any vaccine are those aged 65 to 69. But according to that data from last week, this age group should be on track to sign up by the week of April 12.


Although the government has been pushing extra appointments at some sites, “we’re not seeing clinic spaces sitting around unused,” Strang said. “When we see gaps within a community, we’re reaching out through local radio stations, other mechanisms in that community to make sure that we get those slots filled.”


“I’m pleased to share with you that we’ve hit a milestone of over 100,000 doses in arms,” said premier Iain Rankin at the Thursday press conference, adding that more than half of Nova Scotians aged 80+ and over 85 percent of healthcare workers have their first dose.


Rankin said on the upcoming Easter weekend, 5,000 people will get a jab in the arm. Despite that, Nova Scotia currently sits at the lowest vaccination rate in the country at 4.67 percent, according to government data (the national average is 11.86 percent.)


But Strang said that will all ramp up later this month, with his new mantra: “first we got good, now we get fast.” That’s not an April Fool joke, either.