Can you measure a year in press kits? Tara Thorne wonders. 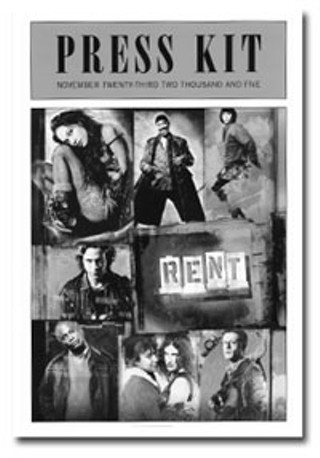 The movie press kit has evolved from business-sized folder with picture CD and press notes into an even more boring, DVD-cased electronic press kit (EPK) featuring pictures, press notes, the trailer and whatnot. So we appreciate it when studios make an effort to jazz up their pressers. For the ridiculously enjoyable 13 Going on 30, in which Jennifer Garner’s character worked at a fashion magazine, the studio sent along a mocked-up version of the film’s fictional publication.

Even though we think Rent looks like 10 kinds of crap, we do applaud Sony’s effort in designing a Broadway-esque handbill for its promotion. We believe handbills are yellow and black, not multi-coloured with a blue banner like this, but still: good show.

Down with Teen People

A couple weeks back we introduced you to the teen-pop sibling stylings of Prussian Blue, AKA 13-year-old California twins Lamb and Lynx Gaede. The twins sing songs of white supremacy and love Hitler, as revealed in an October ABC special. We told you about how ElleGIRL had killed an interview with the twins after their parents demanded pre-publication approval, which rival Teen People was apparently willing to give, planning a Q & A with the twins for early next year. The tide has since turned, the New York Post is reporting this week:

In a statement, Time Inc. said “a junior employee” made unauthorized promises to the twins’ mother. “Such an agreement is in violation of Time Inc. editorial policy and, as a result, we are killing the story and pursuing a formal inquiry.” ... At first, Teen People said it would run the story, but make clear that racism was abhorrent. “The only reason they got the story was because of the agreement,” the girls’ attorney, Ed Steele, told The Post. The controversy is shaping up as a huge test for incoming Time Inc. editor in chief John Huey and People managing editor Martha Nelson, who was given jurisdiction over Teen People earlier this year.

“Unauthorized promises” included editing out the words “Nazi,” “hate” and “supremacist” from the piece. If Teen People had exercised editorial judgment in the first place, its top editors wouldn’t be in this unenviable, completely deserved position.