An open letter from arts leaders to political leaders

The Greater Halifax Arts and Culture Coalition wants to know where the candidates stand.

The following letter was sent to every mayor and council candidate from the Greater Halifax Arts and Culture Coalition. The Coalition wants to know how candidates feel about the arts industry, which is a valid concern. Old-fashioned industrial economies were easy for politicians, because investing tax dollars in something like a factory was big and tangible and meant a lot of jobs for voters. Modern economies are much trickier to manage. One consistent winner for government funding—and that's "winner" in blunt capitalist terms of dollars generated in the economy per tax dollar invested—is the arts, but for whatever reason some politicians have a hard time wrapping their heads around the data. So the Coalition is doing some fact-finding on the candidates, promising to share their information with us voters during Culture Days, September 28-30. We look forward to their results, and encourage candidates to read this letter and respond. DEAR CANDIDATE, I am writing to you on behalf of the 19 professional arts and cultural organizations (music, dance, theatre, film and visual arts) who are members of the Greater Halifax Arts Coalition. As you may know, our operating budgets, which are spent almost entirely in Halifax, exceed $22 million every year. We perform for more than 900,000 people every year, of all ages, from all walks of life, and in communities throughout the Halifax Regional Municipality. We employ more than 900 full time and part time people, most of them local residents. We attract investment into the region—including more than $3 million in corporate support and more than $5.5 million from other levels of government. Any way you look at it, the work we do is good for our economy, and helps Halifax to have a diverse and vibrant core surrounded by active and engaged communities. A letter from Mayor Kelly (September 13, 2011) affirmed that “the creative community is extremely important to HRM, and a sector Council is particularly interested in advancing”. The cultural community helps HRM attract and retain creative workers, and the cultural sector is fundamental for sustaining a healthy and growing economy. To achieve this, we have asked that HRM to work with us to 1) implement a meaningful funding program for professional arts organizations 2) develop and implement a cultural facilities plan 3) benchmark the region's cultural investment against other municipalities in Canada.  We also shared with the Mayor and council a study comparing municipal arts funding commissioned by the City of Hamilton. To give you more information on why this is such a high priority, the following graph shows how we compare: 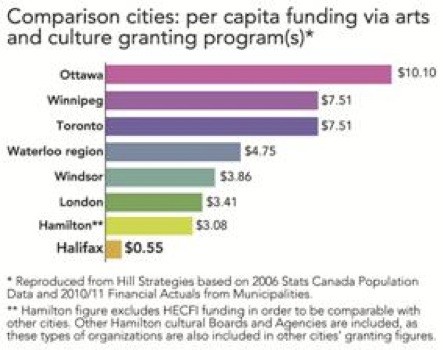 Arts funding in various Canadian cities. Note Halifax at the bottom.
During the next few weeks, we would like to get to know you better, and to help our many members, volunteers, patrons, and supporters get to know you as well, as they meet candidates at the door and as they decide how to vote. Please send us copies of your campaign materials, quoting and highlighting what you plan to do to help create the programs, policy, and funding needed for a healthy and vibrant arts and cultural community. We will compile your responses and share them with our many members and social media followers in a release that coincides with Culture Days, September 28 – 30, 2012.  To help us make sure your views are included, please reply by Thursday, September 20. Thank you for running, and for your efforts to make Halifax a better city for all of us. Members of the Greater Halifax Arts Coalition: