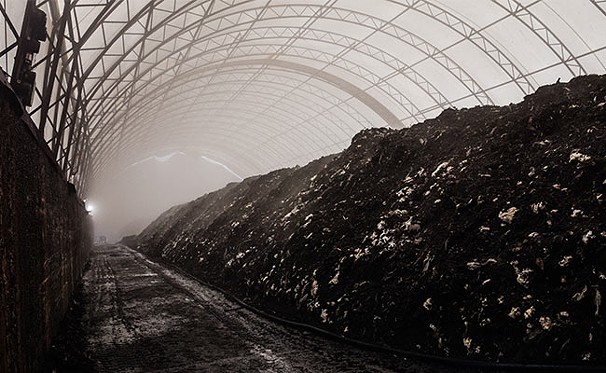 The municipality is looking for a new and improved composting operation, and the possibility it will include an anaerobic digestion system has industry stakeholders excited.

The municipality’s current compost system is over-capacity and doesn’t comply with the latest guidelines set by the Nova Scotia Department of Environment. The smell wafting off facilities can also be—in the words of regional councillor Stephen Adams— eye-watering.

Matthew , manager of solid waste for HRM, says it’s time to upgrade and replace the systems in Burnside and Ragged Lake with new technology that would not only help reduce but potentially turn food waste into fuel.

“Based on discussions with a number of stakeholders—Heritage Gas being one of them, Dalhousie University’s sustainability office being another—they are very keen and interested in anaerobic digestion and it’s  100 percent on the table,” Keliher told city council last week.

In anaerobic digestion, bacteria digest rotting vegetables and other kitchen waste without using any oxygen. As they consume the organic waste, the bacteria release a “” which can be captured and converted to natural gas. Anaerobically digested compost can be used for agricultural purposes.

Dalhousie’s sustainability office has already expressed interest in purchasing natural gas from HRM’s compost facility if anaerobic digestion was to be installed. Natural gas is low in carbon emissions compared to other fuels, which would help the university achieve its target of net zero greenhouse gas emissions by 2050.

“Hypothetically...if Dalhousie purchased it all, it could be 60 to 70 percent of our gas consumption,” says Rochelle Owen, executive director of the Office of Sustainability at Dal. She adds that the final figure would depend on the volume and quality of the gas  produced.

Keliher says the city will count on the market to come up with innovative solutions to HRM’s compost problems. At its meeting on April 25, city council approved the first steps to a new service provider for an improved composting system. After going through a pre-qualifying process, bidding companies will be allowed to submit proposals on operating the waste sites.

Keliher says proposals for both aerobic and anaerobic systems will be considered. Staff and council will assess the advantages and disadvantages of each option before a final decision is made.

In the meantime, industry stakeholders will be watching to see whether an anaerobic system will be installed. Heritage Gas, as part of its submission during HRM’s consultation process last November, indicated it would be willing to partner with the chosen compost facility operator and Dalhousie University to help transport the produced natural gas to the south end university.

“It would be really nice to have a local supply of renewable gas,” says Owen. “I think it would be kind of exciting.”

The municipality is hoping to increase its organics processing capacity from the current 50,000 tonnes to a potential target of 75,000 tonnes per year.