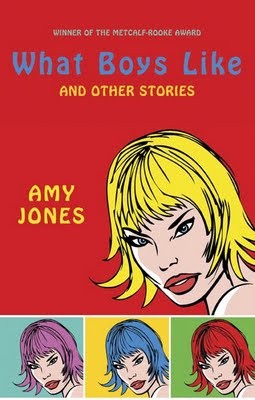 I've got my hard-earned bucks down on Amy Jones as being our next-generation Lisa Moore (not sure why anyone needs to be the next anything, but that's what we do). Originally from Halifax, the winner of the Metcalf-Rooke Award and the CBC Literary Award for Short Story is launching her first book of short stories, What Boys Like, this evening, 6pm at The Company House.

Jones now lives in Toronto, but her stories—predominantly of people in their 20s struggling to find a balance between love and self-preservation—are set in Halifax. The landmarks are unmistakable: a boarded up TexPark, the Sobey's on Windsor, Cousin's cafe. She nails the urban terrain and how much it dictates our relationship with others. Her characters are both frustrating and lovable, kind of like the city itself.

"Location was basically my primary obsession with this book. I pretty much set out writing this collection with the idea that I wanted to write about Halifax, because as a reader I had never really seen Halifax in stories, and as much as I love reading fiction about rural Nova Scotia, it doesn’t really reflect my personal experience," writes Jones on her way back to Halifax for the reading. The city isn't out of her blood yet: she's currently working on another book set here. "I’m not entirely finished writing about Halifax. I have way more to say about it."

We also love Jones because she's a list freak. "Lists have an influence over every part of my life! When I have an idea for a story, it almost always starts out in list form, kind of like a top-ten list of all the most important elements of the story. If I can only think of 5, then I know I have a whole lot more work to do before I can actually start writing, and if I have way more than 10, I know that I’m basically screwed. But I can’t start writing until I’ve got ten (I realize this makes me sound super compulsive, but it’s only with my writing, I swear). I’ve even had a story (“How to Survive a Summer in the City”) that basically just stayed as a sort of illustrated top ten list. Every now and then, I’ll have a character make a list of something, but I’ve been trying to stay away from that lately since everyone starts to assume that that character is me."

Of course, Jones is no stranger to The Coast. An earlier version of her What Boys Like story "Post Mortem" appeared in The Coast's annual fiction issue. (Editor's note: not to brag at our ability to pick literary talent, but Jones is one of THREE Halifax writers that appeared in our fiction issues with books out this month. Anna Quon's book Migration Songs launched here on Tuesday, and Bottomwriter Ryan Turner's short story collection What We're Made Of is launching next Friday at the Company House.)

Speaking of Amy Jones , The Scene