Ambulance fees cause heavy damage to the sick and injured

No free rides, even in an emergency.

Gavin Baumbach was one of the last first-year students at King’s College to get the flu in 2014. But when he finally got sick, it was all the worse for waiting.

“It actually induced heart attack- and stroke-like symptoms,” he says “I kind of panicked because I didn’t know what to do.”

Baumbach, who was living in King’s residence at the time, called his duty don, who in turn called emergency services. Baumbach got out of bed long enough to drag himself down the stairs and into the waiting ambulance. A few minutes later, he was at the hospital.

It was weeks before he realized how much that trip would cost him.

By getting in that ambulance, Baumbach was unwittingly stepping over the borders of Canada’s universal medical system and entering a health care hinterland where user fees can be devastating.

For Nova Scotia residents, ambulances cost $146 per ride, a fee that represents a significant deterrent to use, says James Hutt, director of the Nova Scotia Health Coalition. After hearing from a number of patients about the effect of the fees, the coalition started an online petition, which quickly garnered thousands of signatures.

But because Baumbach was mistakenly identified as American, the initial bill he received from Emergency Health Services was for over $1,000. (He’s actually from British Columbia and doesn’t know how the mix-up happened.) The ambulance fee for all non-Canadians is $1,099.33.

A few phone calls to EHS later, and Baumbach says he managed to get the bill dropped by a few hundred dollars. Non-Nova Scotians are charged a mere $711 per emergency ambulance ride. 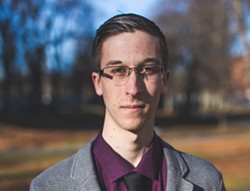 DYLAN CHEW
Gavin Baumbach was hit by the flu, then a big ambulance bill.

Baumbach’s King’s health plan only covered the first $500. For the rest, he had to borrow money from his parents. “I’m living off of student loans, I couldn’t afford that,” he says.

After that initial bill, Baumbach says he’s foresworn ambulances in situations where he’s probably needed one–and many of his friends have done the same.

In a CBC investigation from earlier this year, 23 percent of people in the Maritimes reported that the cost of calling an ambulance would prevent them from doing so, versus 19 percent for Canada as a whole. People under 35 were most likely to make that choice.

This barrier might seem like a violation of the Canada Health Act, which is supposed to guarantee universal and equitable access to health care across the country. But ambulance services aren’t included in the act. That’s partly because when the act was written in the 1980s, ambulances were seen more as a mode of transportation rather than a medical necessity.

And so fees vary widely across the country—from up to $530 in Manitoba, to $45 in Ontario and (until recently) no fees at all in New Brunswick. Everyone pays into emergency transportation through their taxes, but if you call an ambulance when you’re visiting (or studying in) another province, you could end up paying the full cost of the service, rather than the subsidized rate paid by residents.

In Baumbach’s case, he didn’t even think to ask about the cost of the ride because he assumed it would be equivalent to what it had cost a family member to take one back in BC—around $100.

Yet knowing how much the service costs does nothing to help people pay for it, and many people calculate that the cost of calling an ambulance outweighs the benefits, says a nurse at an emergency department in an HRM hospital. She asked that her name not be used.

Some patients arrive at hospital by ambulance, but when they’re ready to leave the hospital many of them have no way to get home safely except by another ambulance. That makes nearly $300 per hospital trip.

It’s enough of an expense for some people to rule out an ambulance altogether when they’re dealing with a broken foot or a cardiac crisis—even if that means getting in their own car and putting themselves and everyone else on the road at risk in the process.

In some cases, Hutt says, patients will only go into hospital when their condition is too severe to ignore—increasing the costs of treatment and worsening the chance of recovery.

For those making less than $20,000 a year, there is a low-income waiver. But Ainsley Fraser, a social worker who helps clients apply for the waiver, says the process is a cumbersome one. To even be considered for the Ambulance Fee Assistance Program the patient must attach a current CRA Notice of Assessment, even though making $20,000 or less, they’d pay no taxes and therefore may not have completed a CRA assessment.

Either way, there is no waiver for people making over $20,000, for whom the fees can nonetheless be crippling. Fraser says she’s had people tell her the cost—and the stress that accompanies it—of calling an ambulance would prevent them from using one in the future, even in a medical emergency.

Perhaps partially as a result of this, the province only collects around 80 percent of the fees it charges annually. Non-residents account for the highest discrepancy in average unpaid bills, with 40 percent of non-resident bills going uncollected (versus roughly 16 percent for resident fees).

From the $12 million in ambulance fees charged in 2014/15—which represents 10 percent of the amount the province spends on ground and air ambulance services each year—the province collected $9.8 million. But once the low-income waiver and other subsidies are taken into account, that number drops to $7.65 million, according to the Health Coalition.

As that’s all the province collects from the fees, Hutt says the government could eliminate them altogether and cover the expense itself. The department has said it has no plans to eliminate the fees, however.

Meanwhile, the research is inconclusive if making ambulances a free ride would invite abuse and overuse.

In New Brunswick—where the on-again, off-again relationship with ambulance fees has seen them dropped and reinstated twice in the past decade—the data is too broad, and the differences in use too small, for any conclusions to be drawn.

Perhaps the easiest answer to removing the roadblock posed by ambulance fees lies in something the Canadian Association of Paramedics has long been calling for: including ambulance services in the Canada Health Act.

In the meantime, Baumbach has an alternative strategy already worked out.

“I’m not taking an ambulance again,” he says. “I’ve told all my family and friends: unless I’m dying, call me a cab.”