The contention around a natural-gas storage facility proposed on for the Shubenacadie river continues. 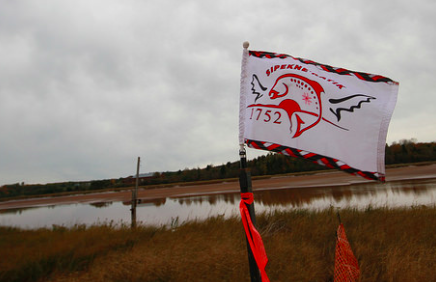 via The Council of Canadians
The Sipekne'katik flag waved at the proposed brine storage site when regulatory approvals for Alton Gas were announced in 2016.

As Canada grapples with questions of Indigenous sovereignty and the duty to consult from coast to coast, the Sipekne'katik First Nation—Indian Brook—took to Nova Scotia's highest court this week for the latest step in an ongoing opposition to a natural gas storage facility proposed on their unceded land near the Shubenacadie river.

This case is a legally complex appeal, rooted in former environment minister Margaret Miller's 2016 industrial approval of Calgary-based Alton Gas' proposal, which would see water from the Shubenacadie used to flush out salt caverns to store natural gas.

That April decision is the centrepiece for this latest court appearance, which saw Sipekne’katik in disagreement with the province and Alton Gas over the level of consultation required to move ahead with the project.

Sipekne’katik are asking the court to overturn industrial approval for the project and direct the province to return to consultation for a set period of time—60 days, he suggested—before coming to a new decision on Alton Gas’ proposal.

Raymond Larkin, representing Sipekne'katik in Nova Scotia Supreme Court this week, said Miller failed in her duty to consider Indigenous title rights to the land and to determine whether "deep consultation" was carried out, therefore basing her decision on a legal error.

"What was required was deep consultation, not something as vague as 'sufficient,'" Larkin said Tuesday.

During submissions, all three parties rested heavily on the 2017 Supreme Court of Canada Clyde River decision, which outlined the need for ‘deep consultation’ with Indigenous groups that have a strong title or treaty claim to the land in question, though the shape of that deep consultation would need to be decided on a case by case basis.


According to Larkin an Aboriginal title claim, as defined by Canada’s Constitution Act, asserts an Indigenous group’s control of and right to use their lands. The Act also clarifies that the duty to consult with Indigenous groups on matters that could affect their treaty and title rights falls on the Crown.


In the case of the Sipekne’katik, title claims to the lands near the Shubenacadie river have not been proven in court, but Larkin says the band’s claim is credible.


Title concerns like this one have been defended in Canada’s highest court a number of times, including in the Delgamuukw decision which asserted Wetsu’wet’en’s title claim to their Northern BC land.


For its part, the province, represented by Sean Foreman, told the court that Miller wasn’t legally mandated to explicitly reference "deep consultation" in her decision and that on the whole, consultation with Sipekne’katik was “extensive.”


“This isn’t a treasure hunt for error, it’s meant to be looked at holistically,” Foreman said Tuesday.


Foreman said all parties agreed the circumstances required deep consultation, but argued that the band “frustrated” the consultation process a number of times over the years, and that failures in consultation "are in large part the result of (the band's) own conduct."


Foreman said the band would not allow certain technical meetings—which the province considered consultation meetings—to go on the record as consultation. He argued that these meetings could not be dismissed simply because they were not on record.


Larkin argued in his own submissions that the First Nation had been engaged in consultation over the years, but Foreman argued the band had been “uncooperative” in an effort to strategically oppose the project.


Robert Grant, speaking for Alton Gas, echoed the province’s position, adding that the company did everything in its power to consult with Sipekne’katik, following requirements set out in the industrial approval, which mandated that the Mi’kmaq be involved in scientific review and monitoring of the project.


Grant argued these conditions were consistent with a valid title claim to the land, despite the fact that Sipekne’katik’s claim hasn’t been legally established.


Grant asked what could be achieved in the recommended 60 days of consultation that would take place should Sipekne’katik be granted the appeal, and suggested ongoing proceedings would slow the project down.


"Sixty days is a...speck of sand on a timeframe that's as big as a beach," he said. "We shouldn't be back-tracking."


Despite the tangled legal matters at the heart of this appeal, Larkin reinforced that the question was one of honouring the duties outlined for the Crown in consultation with Indigenous peoples.


"Deep consultation involves having...a dialogue, a meaningful dialogue on all of those issues, and finding accommodations to the Aboriginal treaty rights that are affected," Larkin told reporters after proceedings on Tuesday.


As the country continues to mull over these essential questions, Justice Frank Edwards, who presided over the hearing, is expected to come to a decision on this case within a couple of months.