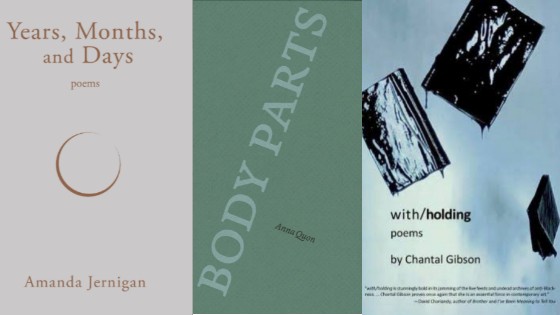 The event's 2022 lineup features a selection of must-read poets.

There's nothing better than the city's biggest celebration of the written word—that's AfterWords Literary Festival, obvs—to get you into bookworm mode. And while this year's lineup isn't short on all-stars in any given genre, it does boast a bunch of poetry from verse-crafters that'll show you all the art form is capable of. Here's all the poetry titles we're adding to cart, thanks to how hyped we are to see their respective authors at AfterWords—which kicks off this weekend with a candlelight reading at Cafe Lara by authors David Bergen and Alex Pugsley. (Other fest programming slated for this weekend has been postponed due to Hurricane Fiona.)

Body Parts
Halifax based author Anna Quon's 2021 Gasperau Press release has the type of resume behind it that means you know it's a slam dunk: Quon's poems have appeared in the likes of Room Magazine and the anthologies of League of Canadian Poets, among others. She's been a juror for the Maxine Tynes Nova Scotia Poetry Book prize and her work has caught the attention of CBC Books.

Years, Months and Days
Luke Hathaway's book of poems was named a book of the year by The New York Times in 2018. Transforming Mennonite hymns into lyric poems, Hathaway bridges secular spirituality and holy reverence while exploring eternal themes of life, death, love and hope.

with/holding
Chantal Gibson makes her work in the space between poetry and visual art, confronting colonialism and "imagining the BIPOC voices silenced in the spaces and omissions left by cultural and institutional erasure," as AfterWords puts it. Her 2021 CBC Best Book-selected with/holding is a "graphic response to the year 2020, bringing a critical lens to the representation and reproduction of Blackness across digital media."

Monoculture
Halifax poet laureate Sue Goyette (who will be in conversation with fest author Madhur Anand on October 2)'s upcoming book isn't exactly prose or poetry, but a best-of-both-worlds situation. Out in October, the volume sees Goyette return to previous themes of wildness (both our own and nature's) while imagining a near-future where Nova Scotia's last forest is a tourism magnet.