Underage and craving a taste of the city’s music scene? We’ve got you covered. Here are some the best places to see live music in Halifax, no ID required. 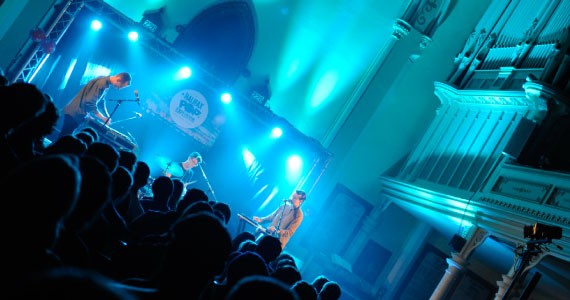 You're 18, you're new in town and there's a good chance that you've heard of (and perhaps would like to participate in) Halifax's bustling music scene. However, you have to be 19 to legally buy and consume alcohol in Nova Scotia, and strict provincial liquor laws cut off most of Halifax's boozin' live music venues (your pubs, clubs, taverns and cabarets) to everyone under that age. It's definitely a bummer, one that we've all lived through (or, in this writer's case, are currently living through), but it doesn't have to mean the end of the world. All-ages shows may not be plentiful—even longtime scene mainstay The Pavilion is in flux, with decreasing operational support from the city putting the venue in a temporary standstill—but regardless, they are still out there. Here's where.

Your best bet for finding an all-ages show is Plan B (2180 Gottingen Street), an unassuming merchants' co-op in the north end. Tucked away at the back of the shop is the B-Side Gallery, home to a rotating selection of artwork, the Anchor Archive Zine Library and, for about two nights every week, some pretty great live music. It's not a huge room—bigger than most living rooms, though not by much—but the venue's genre diversity and accessibility are what make it the indispensable keystone that it is. For a minimal fee, anyone can rent the space, bring their own gear and play their hearts out. True story: I once saw D/A A/D play a set so loud there that a speaker turned itself around and a nearby painting fell off the wall, but nobody was bothered because Plan B is heavenly. Head down to Gottingen, park yourself on a bright green couch and enjoy some tunes, you've got nothing to lose.

Further north, Sad Rad has relocated from Young Street to a new space at 6050 Almon, bringing its DIY ethos and commitment to all-ages shows with it. The upcoming Halifax Pop Explosion (October 21-25) also provides a smattering of options, opening up rarely-used venues like the gorgeous St. Matthew's United Church (1479 Barrington Street) and the less gorgeous (but equally practical!) Halifax Forum Multi-Purpose Centre (2901 Windsor Street) to present some of the festival's biggest names to fans of all ages. Less frequent but still great shows also transpire at stores such as Lost & Found (2383 Agricola Street) and  Pro Skateboards & Snowboards (6451 Quinpool Road), as well as at alternative arts spaces such as the Khyber Centre for the Arts (5521 Cornwallis Street) and the Bus Stop Theatre (2203 Gottingen Street). (Worth noting: the Bus Stop and the Khyber often host wet/dry events, meaning that underage attendees and alcohol can exist within same room, just not the same body. It's a win-win!)

Speaking of Back To School