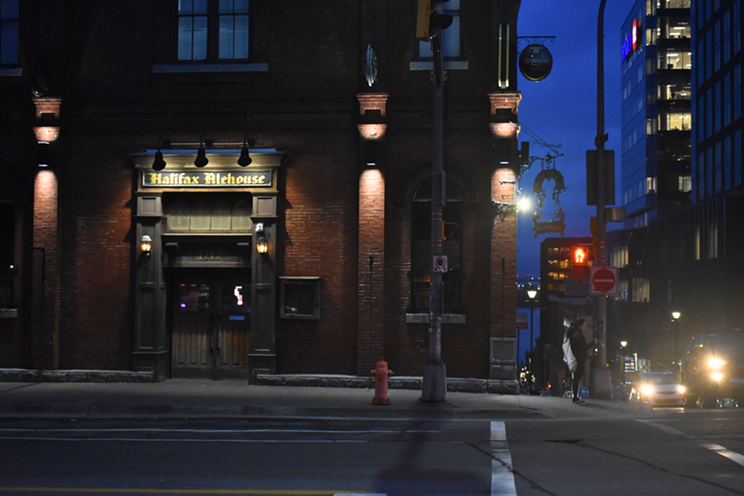 Photo: Martin Bauman / The Coast
Police responded to reports of a disturbance at Brunswick and Prince Streets around 1:15am on the morning of Dec. 24. Ryan Michael Sawyer, 31, was found unresponsive by first responders. He died later that morning.

The Halifax pub has not offered a comment in the wake of Ryan Sawyer’s death.

Nova Scotia’s alcohol and gambling regulator is probing the events surrounding Ryan Michael Sawyer’s death outside the Halifax Alehouse in the early morning hours of Dec. 24, The Coast can confirm.

The province’s Alcohol, Gaming, Fuel and Tobacco division received a liquor licensing complaint against the Alehouse (a historic-themed tavern at 1717 Brunswick Street) on Christmas Day, a source who has asked to remain anonymous tells The Coast. That information has since been verified by the province.

Police found Sawyer, 31, of Ajax, Ont., unresponsive on the sidewalk at Prince Street near Brunswick Street around 1:15am on Dec. 24 after responding to what the Halifax Regional Police calls a “disturbance involving several people.” It’s unclear how the disturbance began or how Sawyer became involved. Police say he was taken to QE2 Hospital in “life-threatening condition,” where he died later that morning. The Nova Scotia Medical Examiner Service has since ruled Sawyer’s death a homicide. The HRP has yet to announce any charges related to Sawyer’s killing.

UPDATED: What we know—and don’t know—about the Christmas Eve homicide, so far: A developing timeline of events surrounding Ryan Michael Sawyer’s death downtown outside the Halifax Alehouse on Dec. 24, 2022.

Photos The Coast has obtained from the night of the incident show two police vehicles outside the Alehouse and at least one officer on an upper floor of the bar—but any details on the Alehouse’s role in the night’s events remain murky. We’ve asked the HRP to clarify the Alehouse’s relation to Sawyer’s death or its ongoing investigation, but police have declined to elaborate. Social media reports have linked the incident as having involved a bouncer at the bar, but The Coast has not been able to substantiate those accounts at this time. We’ve reached out to both the Alehouse’s ownership and management by phone and email, as well as in person. We have yet to receive a reply. Submitted
A photo provided to The Coast from the night of the incident shows police on the upper floor of the Halifax Alehouse.

We do know, however, that Nova Scotia’s liquor licensing body has received a formal complaint about the Alehouse. In an email from the province, spokesperson Blaise Theriault tells The Coast that liquor inspectors “are aware of the incident and are following up,” adding that the province is “unable to comment further at this time.”

The licensing complaint against the Alehouse centres on Section 29 of Nova Scotia’s Liquor Control Act, which grants the provincial government the power to revoke or restrict a liquor license if that license-holder—a bar, restaurant or other venue—is “interfering with the quiet enjoyment of neighbouring properties.” (That’s a fairly broad umbrella clause—and one that more often applies to property law—but the non-legalese version is that a bar risks losing its license if it’s unduly pissing off the neighbours.)

The complaint alleges that the Alehouse’s security staff, over the past near-decade, “have been overly eager to resort to violence.” Last August, footage surfaced of as many as four men—several wearing what appear to be bar staff shirts—pinning a man to the ground for close to two minutes outside of the Alehouse before turning him over to police. At one point, a man wearing a staff-emblazoned shirt employs what looks like a headlock.

The Coast is not aware of any police arrests or charges that stemmed from August’s incident and, to The Coast’s knowledge, the Alehouse has not been implicated by Nova Scotia’s courts in any wrongdoing related to violence. (In 2013, in a separate matter, a Halifax man won a human rights complaint against the Alehouse for racial discrimination.) An investigation, in itself, also does not necessarily mean that a business’s license will be revoked. We’ve asked the Alehouse’s ownership and management whether the bar’s bouncers receive any specific training in dealing with patrons, and if they’re aware of a perceived culture of violence. We have yet to receive a reply.

Do you know more about what happened on the night of Dec. 23/early morning of Dec. 24? Send us an email at martin@thecoast.ca. We’ll never publish your name or any identifying details without your consent.

A note on anonymous sources: As a matter of journalistic principle, The Coast always strives for complete transparency in our reporting—and that includes full attribution for sources. On rare occasions, when the sensitivity of the story might impact a source, we offer anonymity—as we’ve done here. However, we always take complete measures to ensure the information’s accuracy.