Air traffic control for the water

What it’s like watching over Halifax Harbour as a traffic services officer for the Canadian Coast Guard. 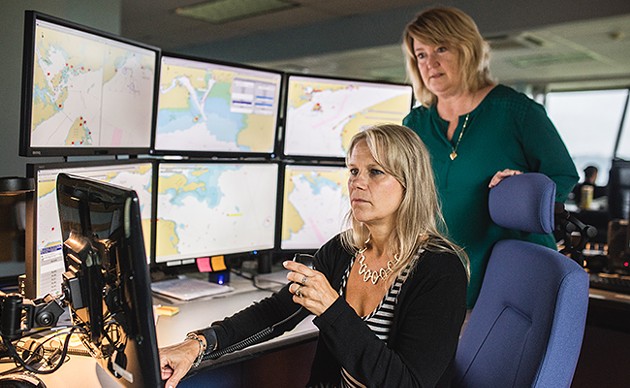 Riley Smith
Dawn Gaudet oversees Sharon Floyd as they watch over the Harbour.

It happens "all the time."

That's what Dawn Gaudet says of boating incidents in the harbour. Gaudet has worked at the Canadian Coast Guard as a marine communications and traffic services officer for over 25 years. This means she responds to everything from a cruise ship collision to a motorboat out of gas.

But the Tall Ships arriving in Halifax this weekend probably won't see any of these issues.

"They don't run out of gas, and they're going pretty slow and when they're in the harbour, pilots arrange for any commercial vessels that are coming in to hold off until they're clear," says Gaudet.

However, the Tall Ships festival does pose some challenges for the Coast Guard.

"We're kind of like air traffic control, just for the water," Gaudet explains.

Sitting at her desk, the radar screens behind Gaudet show Halifax Harbour, but also the Bay of Fundy and Saint John harbour. "We have a big area of responsibility," she says.

The traffic sector will be busiest this summer during Tall Ships, when 23 large sailboats will enter the harbour for four days at the end of July.

"There are at least 10 that are large enough they require a harbour pilot," says Gaudet. "Once they're over a certain size the pilot has to bring them in because they're not familiar with our waters."

The Coast Guard works hand-in-hand with Atlantic Pilotage Authority, which will meet the ships at Chebucto Head, before they enter Canadian waters, and steer them in.

When the Tall Ships come across another vessel, they make passing arrangements. But ships can only enter once they've been cleared.

It's also the boat's responsibility to report if they have any defects or deficiencies, says Gaudet.

"If everything works, they don't have any defects, they have all their certificates up to date, then they're clear to come in."

If not, Marine Transport Safety goes to inspect the vessel before it's authorized.

Other potential issues, like illicit materials, are dealt with by Canadian Customs, but Gaudet's team still hears about it.

"We'll often get a report saying that such-and-such a vessel is being detained," she says.

The ships also have to keep an eye out for small craft in the water. Last time Gaudet worked during the Tall Ships festival, she recalls picking up 76 targets on radar near Georges Island.

Motorboats and sailboats aren't required to report to the Coast Guard if they're undersized, but still need to be accounted for. Smaller things like kayaks and swimmers won't get picked up, though.

"Kayaks are too low in the water and they don't have enough reflective surface for the radar to pick up so it's rare that you'll get them," says Gaudet. "Any target that's above the water a fair distance, any more than three or four feet, we start to pick it up."

Once the Tall Ships are in, many will dock alongside at the waterfront for public tours, which poses another concern—construction. The Coast Guard has set a low wake requirement this summer, meaning any boats can't make waves along the water between Cable Wharf and Pier 21.

"People are working. We don't want them to fall off," says Gaudet.

The real challenge, however, is when the ships leave the harbour.

"They come in dribs and drabs—they don't all come in in a lump," says Gaudet. "But when they leave, it's one after another. You're on the radio steady for a couple of hours."

Although the Coast Guard treats all vessels the same, Gaudet is especially diligent during Tall Ships.

"You don't want a tanker coming in the midst of the parade," she says, laughing.