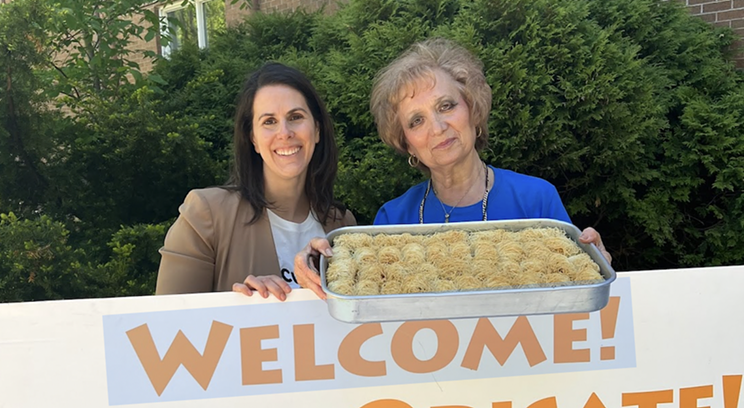 Contributed
Organizer Natasha Compton, lead cook Antonia Panagiotakos and the baklava are ready for the start of Greek Fest Thursday.

"It's in our blood to entertain people," says volunteer who's been cooking at the festival for almost 40 years

A team of volunteers is getting ready to serve up donairs, souvlaki, spanakopita and all manner of Mediterranean cuisine your heart may desire when Greek Fest launches on Thursday. This year’s festival runs from June 9-12, and promises authentic homemade food, dance performances and the best of Greek hospitality on display.

"Greeks are known for their hospitality, their zest for life and love of parties and food, and that's what Greek Fest is all about, sharing those," says Natasha Compton, one of the festival's organizers.

For almost 40 years the Greek Fest weekend drew thousands of people to St. George's Greek Orthodox Church in Armdale. For the past two, the festival has been in pandemic mode, only offering food to-go. The model “sustained us, but wasn’t as much fun,” says Compton. There won't be a Greek band or a bouncy castle this year, and you'll have to order your moussaka ahead of time, but the festival is "still giving people access to the culture and the food, which is really at the heart of Greek Fest."

Compton says the festival’s return to an in-person event has been eagerly anticipated, especially for the community’s young dancers. “They've been practicing extra hard and putting in extra hours at the hall to perform, and they're just so excited to be able to showcase the culture and welcome people back,” she says. “So if people want to get up and dance, great. And I'm sure members of the Greek community and the dance group will show people the ropes.”

This year, St. George’s Greek Orthodox Community is offering a “Greek Fest your way,” giving attendees the choice to order take-out meals or dine-in at the outdoor taverna. Food from the full Greek Fest menu, which features Greek plates (moussaka, dolmades, spanakopita, tiropita, lemon potatoes and souvlaki); stuffed peppers and desserts like baklava, kantaifi ekmek and galaktoboureko must be ordered online in advance, wether you're eating in or taking out. Food from the grill, which includes donairs, souvlaki and gyros, can be ordered on-site.

“The whole community kind of rallies together to bring Greek Fest to life for the Halifax community,” Compton says. The volunteers at Greek Fest range from 13 year olds running food to carts to 80 year olds making souvlaki.

The volunteer cooks are busy preparing enough food for 4,000 guests. Antonia Panagiotakos, the lead cook and kitchen organizer, says the team has already gone through 250 kilograms of sugar; 100 pounds of butter; 150 litres of milk and lots and lots of feta cheese. Panagiotakos has been cooking for Greek Fest since the very first festival in 1985. She orders the ingredients, decides how much food to make, and "rallies the women and men" to the kitchen.  “It’s food that we cook in our homes for our families,” she says, “it’s homemade, it’s not commercial.”

During that first Greek Fest, Panagiotakos recalls not knowing what to expect. They ended up selling out of food by Saturday, and everyone rushed to make enough for the next day in their kitchens at home. “It was so much fun, we just wanted to show the people our culture, our faith, our tradition. And it's a fun thing too, to be together with everybody, the opportunity to work together with our community, with our older and younger, it's a proud thing for us,” she says. “It’s so good. Working down there, it’s not like work, it’s fun.” And it's been that way for 37 years.

“It’s in our blood,” Panagiotakos says, “to entertain people and to make sure the people we entertain have a good time.