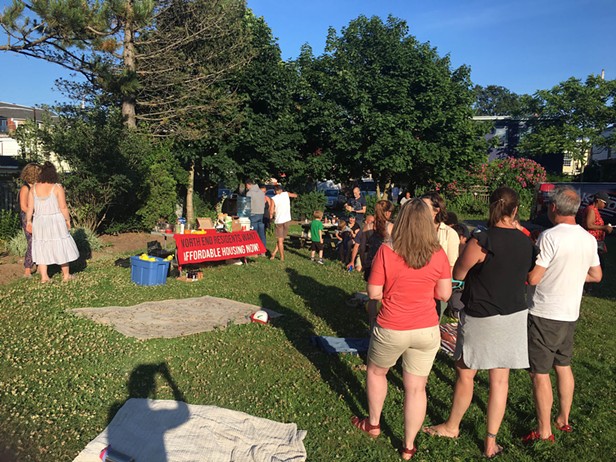 SUBMITTED
Sakura Saunders is a resident and activist in the north end who organized the above barbecue.

Within a two-block radius of my home in the north end of Halifax, there are six condo buildings in various stages of development. This, of course, doesn’t include the four adjacent lots at the end of my street that being sold as a package for its tear-down value of $2 million.

Who gains and who loses when new condo developments are built in your neighbourhood? It’s a question on my mind as I wake up to the battering commotion of these developments raging within earshot of my apartment. Lately, I’ve been feeling the loss.

Just two months ago, I found out that the building that houses some of my favourite community institutions: Radstorm (an all-ages venue, jam space and a community silk-screening studio); the Anchor Archive zine library; and Bike Again were all being evicted to make way for condo developments. Wonderneath, a community arts studio on Isleville, is also space-insecure and fears that its building might meet a similar fate.

These are projects that capture the creativity and passion of locals, empower and engage youth and contribute to a healthy community. Cheap rent is the only way to facilitate the sort of magic that comes with volunteer-driven community spaces, but cheap spaces are exactly what’s disappearing in the north end.

Aside from my personal experiences, the benefits of new condo development are rarely felt by the people who already live in a neighbourhood. Increased noise and dust, higher property taxes, increased traffic and competition for parking and huge towers blocking the sun are common complaints I’ve heard. As a homeowner, the only real benefit comes when you leave the community, cashing in on higher home prices and land value. Existing structures are typically torn down, often replacing cheap rental spaces and apartments with luxury condos and high-end retail spaces, displacing residents and local institutions.

One of the most disturbing aspects of my neighbourhood’s rapid transformation is the fact that it is historically a lower-income neighbourhood. So, when I got a notice in my mailbox earlier this month that another development was seeking a bylaw amendment to build a 17-storey condo, I jumped into action. I popped letters into the mailboxes of my closest neighbours, inviting them to a community BBQ in support of affordable housing and explaining my issues with the rapid condo development.

About 50 folks came out to support the BBQ, sharing produce and burgers donated by the local butcher and farmers market. We played “affordable housing musical chairs” with the kids and as adults, we discussed our concerns and related to each other’s anger.

As empowering as it was to come together as a community, it has been frustrating to deal with the city. They told us that they could not demand affordable housing from condo developers until the Centre Plan was passed, but only begrudgingly admitted that they could still say no to the condo developments. They fixated on the provincial government for not allowing them to use inclusionary zoning but refused to tell us who within the provincial government to pressure to meet their demands They claimed that it was impossible to demand affordable housing from the developers, but then I found out that thing that makes it "illegal" was the Halifax Municipal Planning Strategy, an internal document that they have the power to amend.

While the city has been waiting for years for a holistic plan to guide high-density development, the city acts like there is nothing they can do but roll over and give developers whatever they want, and I call bullshit.

The city has been telling residents for long enough that we have to wait for Centre Plan to demand any benefits from condo developments. It is time to make developers wait, instead.