Advocates push for environmental bill of rights in Nova Scotia

Non-partisan bill would help marginalized communities across the province fight back against pollution. 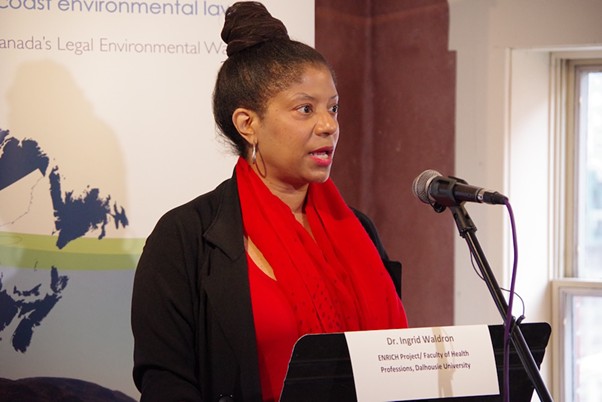 The bill, released on Friday, is the first of its kind in Nova Scotia. The 15-page document was produced by the Environmental Rights Working Group; a collaboration between East Coast Environmental Law, the ENRICH (Environmental Noxiousness, Racial Inequities & Community Health) project, the Ecology Action Centre and several other environmental and community leaders.

“It’s really about protecting all of us,” she says. One thing Waldron finds people often forget is that pollution travels: it has an impact on everyone. That’s why she hopes this bill will be something that all politicians can jump onboard with.

In addition to demanding that all Nova Scotians should have a right to clean air, water and soil, the bill also that although everyone pays the price for pollution, some pay more than others. This sets this bill apart from similar legislation proposed in other provinces, says Waldron. It’s the first time an environmental bill of rights the disproportionate burden borne by communities when in comes to pollution.

African Nova Scotian and Indigenous communities in particular are unequally affected by pollution. These communities are often already vulnerable due to issues like poverty, racism and food insecurity, says Waldron.

“When you then put a polluting industry in their community, you are further compounding the issues that they are already dealing with,” she says.

These problems aren’t news to the people living in these communities, who are tired of their voices not being heard.

At a press conference on Friday at the Wooden Monkey restaurant, representatives from communities across the province shared some of their experiences and spoke about how an environmental bill of rights could change things for them.

Marlene Brown, from the community of Harrietsfield, spoke about environmental contamination in her community that’s made drinking water unsafe in 83 wells. “No one should have to beg for safe drinking water in Nova Scotia,” she told the audience.

Jonathan Beadle from Pictou Landing First and Dorene Bernard from Indian Brook First Nation spoke about how industries have affected Indigenous communities in Nova Scotia. Bernard spoke about her community’s struggle against the Alton Gas project near the Shubenacadie River.

“We don’t want to stand in front of their machinery; we don’t want to be the ones standing on the front line, engaging. But we don’t have a choice. It’s something that we have to do to protect our water for future generations.”

Raymond Sheppard from Lincolnville and Louise Delisle from Shelburne spoke about landfills in their communities. Delisle remembered how when she was a child and the garbage was piled up high, it was burned off and people would be sick for days. Worse, when the fires burned, the rats ran. She spoke about how her father used to sit outside to shoot rats, and how she had to check her bedding at night.

Lisa Mitchell, executive director of East Coast Environmental Law, says these are all examples of communities who are dealing with problems and don’t have enough tools to help them.

“One of the key things we as environmental lawyers find in working with people in affected communities is that they can’t get the information that they need,” says Mitchell. “And they have no advocate in our department of Environment; nobody that’s willing to take up their concerns and take them seriously and take them forward.”

If the Nova Scotia Bill of Environmental Rights is endorsed by the province’s political parties it has the potential to become enshrined into law, but that’s still a long way off.

For now, Waldron says the first step is to convince politicians to commit to working on this issue together. That may sound impossible, admits Waldron, but she’s optimistic. She’s counting on the public to show their support for the bill by pressuring government representatives to support it.

The proposed bill can be found online, along with summaries from the communities.