Advocacy and the future of cycling | Opinion | Halifax, Nova Scotia | THE COAST

Advocacy and the future of cycling

An excerpt from The Urban Cycling Survival Guide

One of the greatest misconceptions about the various types of dedicated bicycle infrastructure is that they only serve a minority of the population—that they’re pet projects for bicyclists. The reality is that whether you’re left or right leaning, urban or suburban, rich or poor, bikes are simply one of the most accessible and efficient forms of urban mobility. While they mean much more than that to some people, at the heart of the matter is our fundamental right to choose how we move and make our way through life. Just like sidewalks, bike lanes and cycle tracks serve all road users by providing a clearly marked space for a specific user group and, in turn, adding to the safety and predictability of the roadway. That safety and predictability, in particular when reliably networked, means more riders from all walks of life. 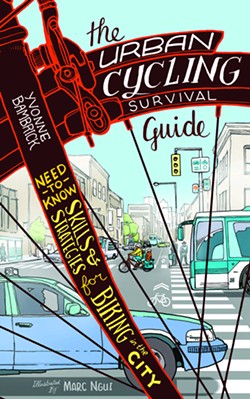 The Urban Cycling Survival Guide: Need-to-Know Skills and Strategies for Biking in the City is available now from

Not only do bike facilities make visible the fact that cycling is a viable way to move around the city and demonstrate the commitment on the part of municipal governments to encourage travel by bike, these facilities help many who might otherwise be too nervous to ride add two-wheeled travel to their transportation options. In fact, their addition to urban roadways — networked and physically separated cycle tracks in particular—is the single most important factor in the growth of ridership. According to the first multi-city academic study of U.S. protected bike lanes (2014), “When protected bike lanes are added to a street, bike traffic rises—by an average of 75 percent in their first year alone, for the eight projects studied.”

And building this type of infrastructure to accommodate bike traffic is cheap too. “One thing I like to remind my business-minded friends and colleagues about,” says April Economides, president of Green Octopus Consulting, “is that bicycling is more tax-payer-friendly than driving. Bicycle infrastructure is considerably cheaper to construct than car infrastructure, the most famous example being that Portland, Oregon’s outstanding 300-mile [482 km] bike network completed through year 2008 cost the same amount as one mile [1.6 km] of freeway.”

But we still have a long way to go to meaningfully integrate bicycles into our urban planning and traffic systems, build real public support and understanding regarding their value, and grow the percentage of the population using bikes for transportation. As per a 2013 OECD study on cycling safety, “The traffic system does not typically account for the specific characteristics of cyclists and bicycles...Though cycling is an important component of urban mobility, cyclists are often seen as intruders in the road system.”

Intruders, eh? The days when the bicycle was the only vehicle (other than horse drawn carriages) on the road seem to be long forgotten. But rest assured, bikes are too important a part of the solution to urban congestion to be ignored. People need to move and bikes get the job done.