About that gun lobbyist at the Nova Scotia shootings press conference

Hired gun for guns wonders what gun the gunman used. 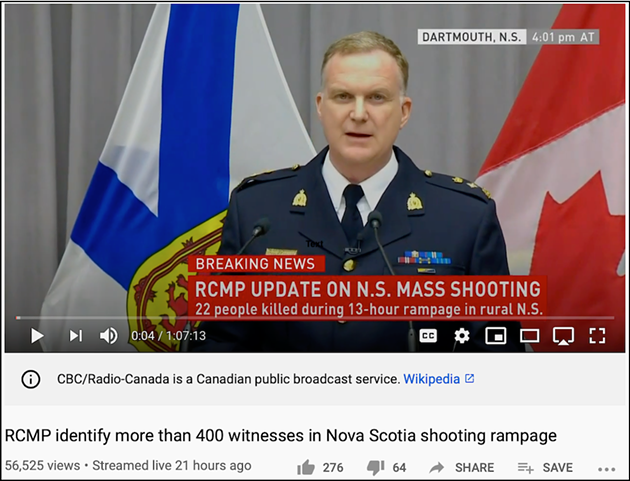 The RCMP has a reputation for being so careful and cunning, its investigators "always get their man." But Tuesday, during what was supposed to be a press conference about Nova Scotia’s mass shootings, the man they got was a registered gun lobbyist.

Nova Scotia RCMP superintendent Darren Campbell did most of the talking at the livecast press briefing, with RCMP spokesperson corporal Jennifer Clarke moderating and providing French translation. Campbell gave a half-hour update on the investigation into the April 18 and 19 tragedy before taking questions from reporters calling in by teleconference. The first came from CBC national reporter Kayla Hounsell.

Hounsell asked what caused RCMP constables Chad Morrison and Heidi Stevenson to be alone in their police cars Sunday morning as they hunted the gunman, a fateful decision considering the shooter ended up wounding Morrison and killing Stevenson. "By the time constable Stevenson and Morrison were planning to meet up, you had some clear idea of what you were potentially facing here," Hounsell said. "So we're wondering why your officers had not doubled up or partnered up at this time."

"Thanks for your question," Campbell said, before answering without giving away much detail about the RCMP’s investigative methods. "What I can tell you is that all of our officers weren't alone."

After Hounsell, over the next half hour other journalists from local, national and international media organizations asked their questions, to be heard by Campbell, Clarke and anyone tuning in to or streaming the broadcast. (As of Wednesday afternoon, the CBC webcast had over 56,000 views, while Global’s had more than 18,000.)

via youtube
RCMP corporal Jennifer Clarke on Global's webcast.
There were reporters from CTV, the Canadian Press, CBC Nova Scotia, The Coast, the Chronicle-Herald, Global, The Globe and Mail and The Wall Street Journal. Their inquiries included questions about external oversight of the RCMP’s critical incident review, why the investigation has reached into the United States, if the gunman had a history of domestic abuse, how the RCMP decides to use the province’s Emergency Alert System, and where the gunman got his semi-automatic handguns and semi-automatic rifles.

The last reporter to ask a question was Héloïse Rodriguez from Radio-Canada. That question, about the relationship between the gunman and the first woman he assaulted Saturday night at the start of rampage, came in French. Campbell and Clarke conferred at the podium off-mic before Clarke answered in French. Then she said, "One more question please."

If the province’s daily COVID-19 press briefing is anything to go by, there are always more journalists signed up to join this sort of big-news conference call than there is time for questions. There was certainly pent-up demand from reporters who are following the shooting story, because before Tuesday, the RCMP hadn’t given a briefing on the gunman and the investigation into the shootings since Friday.

For Tuesday’s press conference, pre-registration closed two hours before the call started, which should have given the RCMP time to figure out the pecking order of reporters to take questions from. And yet the last question of the day didn’t go to a journalist, it went to a registered gun lobbyist.

"Was the murderer in possession of a so-called military-style assault rifle?" the gun advocate asked. Campbell said there was "a weapon that could be described that way," but he didn’t want to get into details for fear of tainting witness accounts, so the firearms lobbyist asked a follow-up question. "Can you say whether or not that so-called military-style assault rifle was actually used in the rampage?"

"I can't at this point, at all, talk to you about too many of the weapons," Campbell said. "Constable Morrison, as well as the other surviving gunshot-wound victim that was leaving the Portapique area, described that the gunman had shot them with a handgun."

The Coast contacted the lobbyist, who is also executive director of a Canadian gun advocacy organization. He was not even a bit ashamed of weaponizing a press conference about a mass shooting incident in some sort of service to his organization’s aims, which boil down to encouraging gun use and fighting gun laws.

"Sadly main stream media is typically anti-gun and civil disarmamentalist and have been pushing this self serving agenda for decades," wrote the professional gun advocate in an email, pushing the anti-media agenda tyrants have been using for centuries. "Law abiding Canadian firearms owners no longer trust main stream media to report unbiased truth and have turned to alternative sources to keep them informed."

We asked RCMP spokesperson Clarke why the gun community’s hired gun was allowed in the press briefing. There has been no response yet.