A war on every front

VIA TWITTER
Cindy McCain speaking about Lesbos at the Security Forum.

You are eight years old and today is the first day of fishing season. Your father has finally taken you out with him and even bought you your own pole. Though you’re too young to understand adulthood, you can tell that this is how you become the person you hope to be. Your chest swells and your hands shake as your father helps you thread the rod. He guides your arms as you draw back. “Not bad!” he exclaims as you cast for the first time. 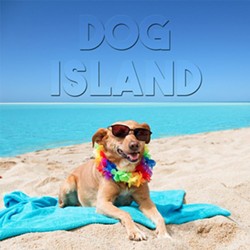 Andrew, Hugh and Chris are three-quarters of Dog Island,Atlantic Canada’s premier cultural Marxist podcast. Here the episode they recorded at the security forum right here.
Except it is not 1996. It is 2018 and it is on a Saturday. You awake from the dream, the last time you will feel hope. The Coast has given you and your fellow internet radio hosts press credentials for something called the Halifax International Security Forum, which is like comic-con for warmongers. At first, you were excited because you thought you might get to touch a real gun or meet a mercenary. Instead, you sit in a room full of TVs and listen to ghouls on another floor talk about the murder of millions in the most boring way imaginable.

Bleary-eyed you try to make sense of why two Greek boy scouts are standing with Cindy McCain, the beer heiress and widow of failed bomber pilot/ John McCain. An award, named after the former Arizona senator, is being given to the people of the Island of Lesbos for helping refugees. The mayor of Lesbos didn’t care so they sent these teens. Your comrade asks you, “Weren’t those refugees fleeing the endless wars that John McCain championed?” You don’t have an answer. All you have is the Belmonts in your pocket and the dozens of toothbrushes you liberated from the washroom.

You leave to drink, but you cannot drink water. Water nourishes and you have forfeited any right to nourishment, spiritual or otherwise. It’s and the alcohol warms your body. You can feel in your veins now, but soon you will feel nothing. Your cohost is singing along to “Escape” by Rupert Holmes. He knows all the words. This does not seem strange.

The hotel has sandwiches, roast beef, good enough. You grab one, removing any and all vegetables before taking a bite.

The three of you sit on a leather sofa in the lobby debating whether or not you really want to try to get an interview with Eli Lake, an egg-shaped reporter. Suddenly you notice the War Conference is playing a Feist song.

You wonder how the actual journalists can bear to do this. They file stories. They moderate panels. Their publications are sponsors. Don’t they understand their complicity in normalizing this charade? Are they, like you, under the spell of the free sandwiches and toothbrushes? Are they simply drunk on the sweet nectar of access?

Your breaking point is a panel on the importance of letting women and minorities also murder people. Your extremities numb as a marvels at ISIS and Boko Haram’s use of social media to increase gender diversity in their ranks. Thanks to corporate inclusivity coaches, the language of progressive campus circles now flowing from the mouths of generals and nobles as they discuss how to keep Latin America in the West’s sphere of influence.

Darkness and light dance. They consume each other. The light does not fade, it flows into the river of your childhood and becomes the darkness once again. You forget the calm of the air, the sound of the river, your father’s hands holding yours. It is all darkness now.

The darkness you have found here is not the depravity of cackling villains you imagined. These are not beings who are strange to you. You know them. You have always known them. The darkness permeates everything. This is not a fleeting moment in human history, this is the . It was never a river, but an ancient ocean. An endless darkness. You float upon it and stare upwards at the heavens.

The firmament between this world and an older, darker world has cracked. What floods in isn’t cruelty or callousness: It is banality. Nothingness. You forget the taste of food, the sound of music. Even tenderness or affection like little more than fever dreams, notes written in the window fog of your old life.

The coronavirus has lessons for journalists covering the climate crisis

By Kyle Pope and Mark Hertsgaard

And then there's the climate crisis

Tune in to 25 for 25, The Coast's anniversary podcast