A tour of the new Bridge Terminal | News | Halifax, Nova Scotia | THE COAST

A tour of the new Bridge Terminal

Politicians try to steal the spotlight, but the star of the show is the expansive terminal and its view.

Get more stories like this delivered to your inbox by signing up for The Coast Daily newsletter.
I've been anticipating the opening of the new Bridge Terminal since the day it was proposed. It's a great idea, is a wonderful advance for transit and will serve Dartmouth well. So I started pestering city officials for a tour of the new terminal months ago. It's not unusual for reporters to tour construction sites, but the city kept putting me off, saying, well, it was a construction site, so I couldn't tour it.
click to enlarge

Peter Kelly praised Peter MacKay.
But out of the blue, yesterday the city's communications department sent out a general media email inviting all reporters to tour the Bridge Terminal today. We were told that steel-toed boots, hard hats and protective glasses would be required because, yep, it's a construction site.

Anyway, I was interested in a tour, but officials first made the collected reporters witness a dog-and-pony show of various politicians and officials taking credit for the new terminal. Those included Metro Transit manager Eddie Robar and infrastructure manager Terry Gallagher, who actually had a lot to do with the project, but also lame-duck mayor Peter Kelly and defence minister Peter "Helicopter" MacKay, as well as a bevy of city councillors, MLAs and their associated PR people.

And below, from the inside:

The yellow tile scheme feels right to me, bringing a bit of a big city terminal feel without being annoying about it.

There are two waiting areas on either side of the building. Here are three views of one of them. The chairs (shown in one picture) are not yet installed, but this one area will seat between 50 and 60 people, said Gallagher. 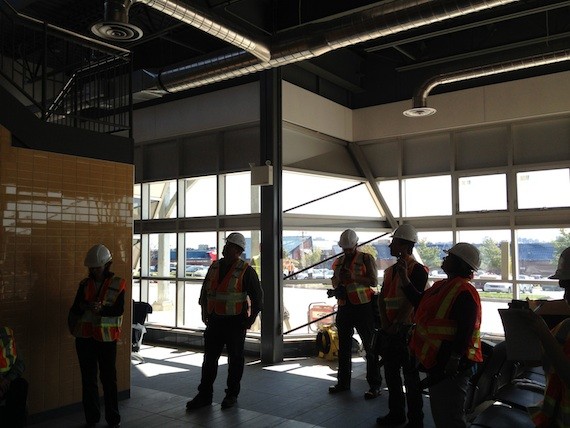 Also inside are two washrooms. Here's a shot of the men's room, without the dividers installed: 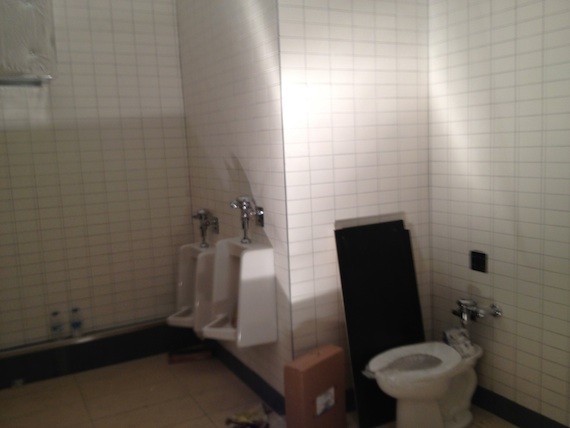 Facing the Sportsplex is a room for drivers, which includes a small kitchen and two washrooms. I checked out the room with a few drivers, who seemed to like it, and especially liked that there were nice large windows that looked out onto the bus traffic: 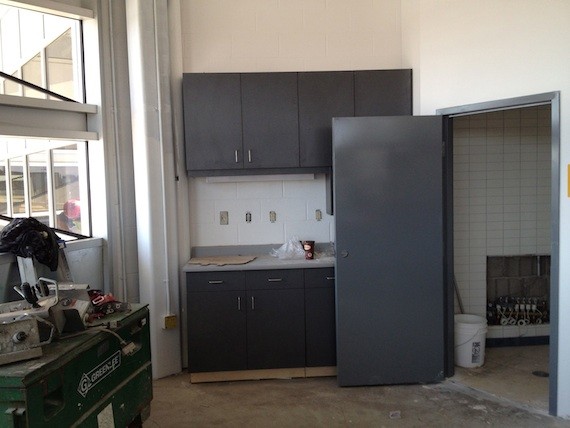 On either side of the terminal building are the bus bays, and overhangs so people can wait for their particular bus without getting wet. The landscaping of the entire site is excellent, and frames the terminal well. Here are some pictures of those areas: 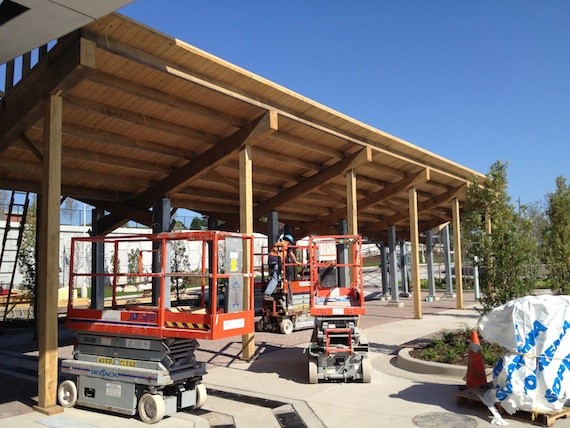 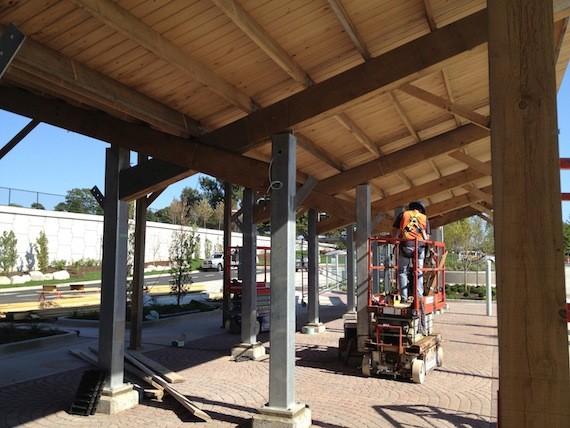 The real glory of the place, however, is up top. First of course is the view of the harbour: 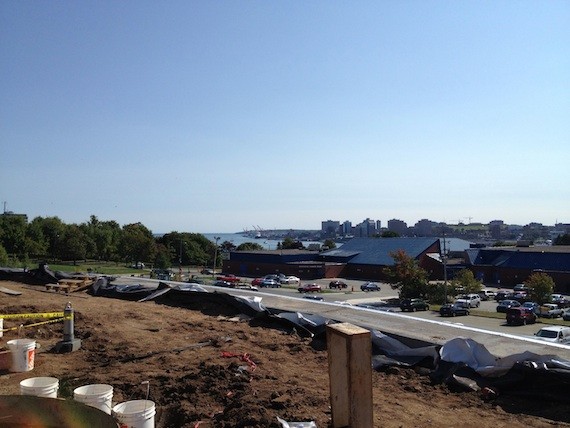 The only concern I have about the top is that a six-foot fence will separate visitors from the view. (It's not yet constructed.) Obviously, we don't want people falling off the 30-foot drop, and there are building codes to respect, but the fence will be some distance from the edge, as a green space of perhaps 20 feet width is between the fence and the ledge. I would've liked the fence to be somewhat lower, at four feet, so we could peer over for an unobstructed view of the harbour. A friendly construction worker, however, told me he didn't think the fence would be overly intrusive, and that somehow its black colour would serve to make it less intrusive. I'm skeptical, but I'll guess we'll see.

Otherwise, the top of the building looks really, really great. While I was there some bricklayers were working on the decorative flooring under what will become outdoor seating areas. You can see that coming together in these pictures: 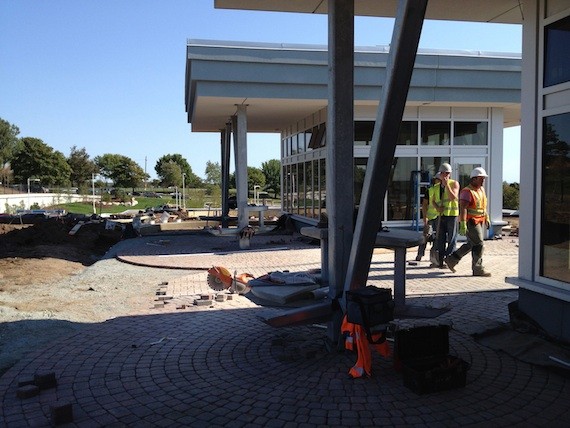 Looking backwards from the terminal, uphill, we can see how the pedestrian bridge is coming together. At the end of the brickwork, two six-foot wide asphalt paths will run across the bridge and then to either side, to Nantucket and Thistle Streets. A crushed gravel path in what's left of the wilderness, leading up to Dartmouth High, meets one of the asphalts paths. The asphalt hasn't been laid yet, but you can get a sense of things in these pictures, where stakes outline the edges of the paths: 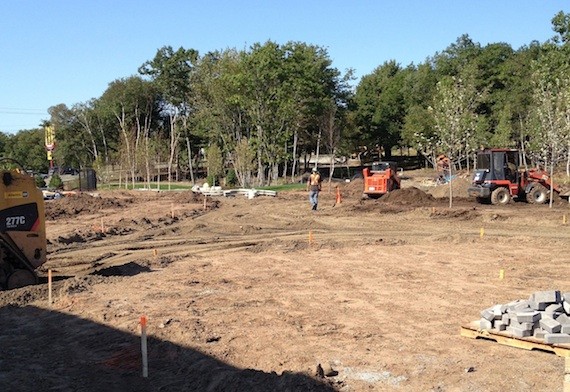 Those who walk past the terminal on the Thistle side have already seen the black fence running along the edge of the terminal path. There's a slight decline from the level of the Dartmouth High football field, so I wondered if a second fence might be built parallel to the first, at the top of the decline, so football players wouldn't barrel down the hill and into the bottom fence. But a construction worker told me that wasn't the plan, and there'd only be one fence. He said that the football field isn't used for real games, so that wasn't a concern.

I agree that it will be a much more pleasant experience for pedestrians to not have to walk between two parallel fences, but I'm kind of scratching my head on the reasoning, as I see some pretty tough playing at football practices on the field. What seems to me to be a real concern—football players losing control and tumbling into a fence—isn't addressed at all, while what seems to me a far less likely scenario—people accidentally falling over a short fence and then tumbling 20 feet across a horizontal garden to fall of the edge of the building—is addressed, with the six-foot fence. But what do I know?

There are a few more details that pictures can't capture. I was told that the tender for the interior kiosk was awarded to Fares, Inc, to operate a Convenience Mart store. Fares, Inc. is the development company behind the nearby King's Wharf project, and is owned by Francis Fares. A Metro Transit official tells me that Fares' hope is to start construction of the kiosk in November, with an expected January opening date. The store will primarily sell convenience items, but yes, coffee will be available, and talks are on-going about selling transit tickets.

At the question and answer before the tour, I asked, politely I thought, about the delay in construction, and if Pomerleau Construction has been fined for the late opening. Peter Kelly shouted out "A hundred dollars a day!" but I could tell right away that Kelly was just making something up, so I pressed project manager Terry Gallagher for details. Gallagher at first refused to answer, but after the Q&A was more conversant.

As Gallagher explains it, he didn't want to negotiate late fees with Pomerleau in front of the press, but the gist of it is that the city can only charge the company for real costs incurred because of the late opening. He used the example of the non-functioning Go Time system, which had been using GPS from the buses. The city had to turn off the GPS system on August 27, because times are based on buses running through the new terminal. Instead, the city has had to pay a worker to key in times by hand. That, said Gallagher, was an example of the kind of cost that could be charged to Pomerleau. "You can't charge because the bus is late," he said.

Lastly, with so much work remaining to be done—landscaping still to be laid, lighting, seats, and toilet fixtures still to be installed, asphalt paths and fencing to be constructed, construction waste cleared away and a thorough cleaning—is it really possible that the terminal will open October 1, just 19 days from now? "I've seen worse," says Gallagher, assuring me he's not worried about it.

So what's my overall impression? Well, many people in Dartmouth were upset that the new terminal is placed on what used to be the Urban Wilderness Park in the Dartmouth Common. It's true that the loss of the wilderness is significant, and shouldn't be downplayed. But I think the new terminal brings a stunning visual gravity to the area, and will win over the neighbours as they experience it in action.

At one point the construction of the pedestrian bridge, and its associated stairways, elevators and paths out to adjacent streets, pegged at a cost of $2 million of the overall $11.5 million construction cost, was considered excessively expensive and expendable, and city officials urged council to agree to a scale-downed project without those features. People could simply walk down the Thistle or Nantucket Street sidewalks, across a lane of bus traffic, then into the terminal at street level, was staff's argument.

It's now plainly obvious, however, that the upper level of the terminal, and egress through that level, is what makes the whole thing work. It would be a disaster without the upper level. So council should be congratulated for resisting the urge to cut costs at the expense of what, fully built, is an architectural jewel.