Charged with second-degree murder, Christopher Garnier is out on bail. Meanwhile, Nova Scotia has the highest remand population in the country. What separates the two examples is often a matter or money, and race. 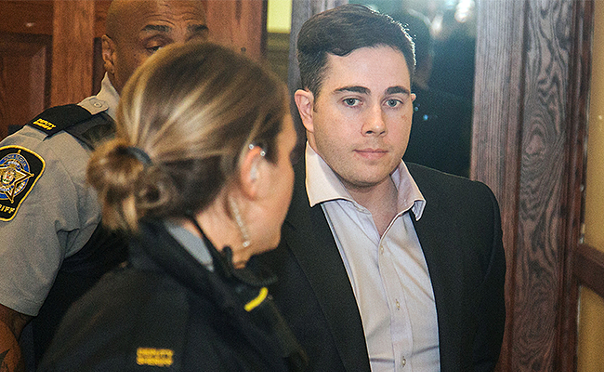 THE COAST
Christopher Garnier being escorted from court, in 2016.
One of the newest members of the Canadian Senate says a criminal case in Nova Scotia perfectly demonstrates what’s wrong with the justice system—even though the process has been fair.

Senator Kim Pate is talking about the release of Christopher Calvin Garnier from jail for a second time. The 29-year-old is charged the second-degree murder of Catherine Campbell, a cop who served six years on the Truro police force. Campbell was off-duty at the time of her death in September 2015. The odious details made national news, as outlined in documents filed—but not yet proven in court—by investigators with the Halifax Regional Police major crime unit.

Garnier is set to go to trial next fall but is a free man, so long as he follows his bail conditions—among which include residing with either one of his parents.

Senator Pate says from everything she’s heard, the decision to release Garnier is legally sound. But that’s not the problem.

“Why isn’t every accused able to access that defence?” Pate asks.
Garnier achieved his release with the help of defence attorney Joel Pink, one of the most high-profile and expensive criminal lawyers in the Maritimes.

Statistics Canada reports that “over the last decade, the remand population (in adult correctional facilities) has consistently exceeded the sentenced population,” estimating about 57 percent of people in jail are on remand. Nova Scotia’s remand population is the highest in the country, nearing 70 percent.

“In some it’s not a surprise that we see a higher rate,” says Pate. “The degree of unfairness based on the degree of inequality is rife.”

Or, put simply: “If you’re poor, you’re more like to be charged.”
Specifically, says the senator, “If you’re a poor, racialized woman, the chances of you being held awaiting trial are much higher.”

This is a complex issue, and it isn’t new to Pate. Before she was appointed to the Senate, she spent 35 years working in and around Canada’s legal and penal systems as an  advocate.

But for , incarcerated people—even those on remand for minor charges—some challenges remain the same.

“If you don’t have a stable place to live, an income, the chances of you being held in custody exponentially increase,” Pate explains. “Once you’re , it’s very hard to get off that path if you don’t have support.”

The senator says she has worked with people across the justice system, from lawyers to police, who are trying to protect the most vulnerable from unfair treatment.

But she says it’s an enormous problem that must be addressed at all levels of community, government and authority.

Still, Pate points to one specific dilemma that could be changed overnight.

“All the cuts to social assistance over the years,” Pate says. “There’s no way you can survive on the rates that are provided right now.”

Poverty can directly lead to criminality, says Pate. And people “are  more likely to come to the attention of the authorities.”

Meanwhile, Garnier is due back in court in August to face charges of breaching his bail conditions, the subject of a hearing that took place last week. The murder trial is set for  November.