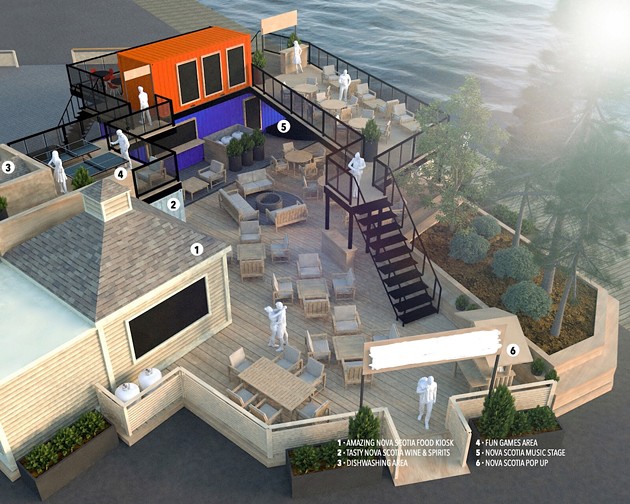 Submitted
A concept illustration of the new wine bar, which will be beside Stubborn Goat Beer Garden on the boardwalk.

The team behind Stubborn Goat Beer Garden is bringing you another reason to head to the harbour. Legendary Hospitality Group was recently announced as the successful bidder forDevelop Nova Scotia's idea of launching a waterside wine bar. The new bar, intended to showcase local booze—cider, spirits and the province's unique Tidal Bay white wine appellation—is scheduled to be open by May 15.

"We'd like to get to the point where we can offer every Tidal Bay in the province," says Geir Simensen, who owns Legendary Hospitality with Kyle Drake and Joe McGuinness. "Our clientele, you know, it's not the same clientele that it was 10 years ago. Our clientele is a lot more educated, and with education becomes higher expectations. There's a lot of places for people to spend their money. So in order for them to come to us and come back, we feel like we need to offer a little more than perhaps what is expected."

The as-yet-unnamed bar will be located on the harbour boardwalk right beside the Beer Garden, and share its multi-level open-air look. But it will also have a fire pit for those chilly nights, a stage for live music and a kitchen that makes up for its lack of a deep fryer with a menu ranging from whole lobsters to charcuterie pizza to ceviche.

"Drinking an appellation wine on our awesome waterfront and then eating a freshly steamed lobster, I would think that'd be a pretty cool experience," Simensen says. "At least that's what we're heavily banking on."