How the 80-year-old non profit feels about being caught in the crosshairs. 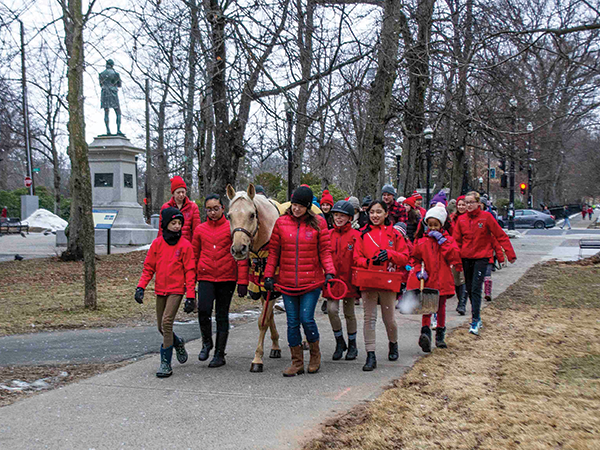 SUBMITTED
Angie Holt with a gaggle of Lancers walking Ben the pony to Ronald McDonald House.

There's one thing in Halifax that no other city in the country has: a one-of-a-kind non-profit riding school and equine therapy centre in its downtown core. This little non-profit-that-could has stood the test of time for over 80 years while the city grew all around it.

The Halifax Junior Bengal Lancers, founded in 1936 to help children living in the city, has remained true to its mandate of making horses and equestrian sports accessible to those who wouldn't otherwise have the opportunity, while fulfilling its mission of building better lives through horsemanship. The historic non-profit survives on the backs of volunteers and a strong community. Instilling a strong sense of civic responsibility in its young riders is at the heart of Halifax Lancers' continued success. A place where 29 horses are cared for by nearly 200 riders each week, Halifax Lancers is a steward of "the Horses of Halifax" who play an important role in the lives of thousands of locals and visitors annually.

Halifax Lancers occupies municipality-owned property on Common land and, under its lease, is responsible for the upkeep of the over-100-year-old heritage building it occupies. Halifax Lancers' operations are entirely self-funded through member fees and fundraising, and the organization is now caught in the middle of a dispute between the municipality and the province of Nova Scotia. The province proposed building a large parkade as part of the QEII hospital development directly adjacent to Halifax Lancers' paddock. In fact, they are looking to build into the paddock. There appears to be efforts to find a solution. This week, regional council passed a motion to look into narrowing Summer Street, which would allow the parkade to stay on the west side of the street with the rest of the Hospital. Many citizens have also voiced their opposition to the project and their support for the Halifax Lancers.

Until recently, neither provincial nor municipal staff had consulted with the Halifax Lancers. However, now that there is a dispute, it seems to be a main concern. After two weeks of hearing its name tossed around as a bargaining chip, Halifax Lancers has finally been brought to the table. However, the group finds itself in a vulnerable position—caught between being tenants of the municipality while needing to work closely with the province should the project proceed.

The Halifax Lancers has always been a good neighbour, and enjoys a wonderful relationship with hospital patients and staff who find respite in having the horses nearby. It actively helps in treatment and recovery for patients ranging from those referred to the Halifax Lancers' therapeutic riding programs by health professionals, to those who participate in Equine Assisted Learning programs through the IWK, to those fortunate enough to have the horses in their view while in palliative care. Through community outreach, the non-profit offers free public events and brings ponies to nursing homes and other health-care facilities.

Should the parkade proceed, the equine sanctuary will face extraordinary difficulties to keep programs running, and horses and riders safe during construction.

Halifax Lancers is now in negotiation with both the municipality and the province to find a positive solution—as well as collecting "tails" about the horses of Halifax from far and wide through social media.

For nearly 85 years, the Horses of Halifax have been trotting through the hearts of Haligonians. The people of this city have voiced their support for Lancers alongside their concerns over the parkade and together, may we keep this hoof print deeply imprinted on our community.

Angie Holt is an Equestrian Canada Competition Coach and is Executive Director at Lancers. She knows firsthand the life lessons and strong values Lancers teaches having spent her youth at Lancers. After developing her equestrian career in America and Europe, she returned to Lancers five years ago. Through her work and on a personal level, Angie advocates for youth, animals, and the underprivileged.