Ira Reinhart-Smith and 14 other youth say their lives are at risk due to dangerous climate change, and want the government to step in to help. 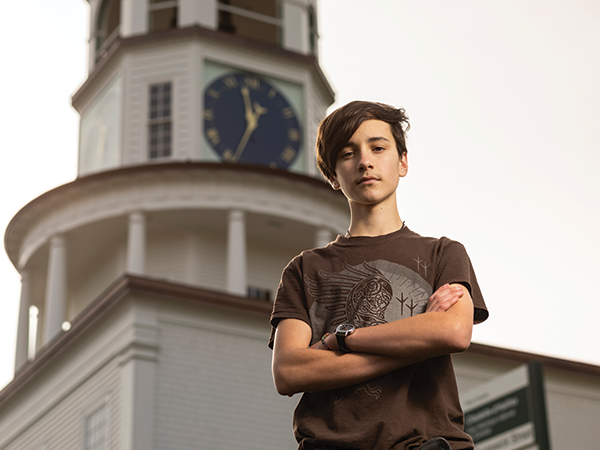 RACHAEL MCGRATH
“They need to work with us, not against us,” says Ira Reinhart-Smith.

Last month, 15 kids and teenagers filed a lawsuit against the federal government for putting their lives at risk through dangerous climate change. One of them was 15-year- old Ira Reinhart-Smith from Caledonia—almost two hours outside of Halifax, on the way to Kejimkujik National Park.

"This is the biggest threat that humanity has ever faced," says Reinhart-Smith, "We're not just some kids who have nothing better to do with our time so we're just trying to strike. What we're doing is trying to save our world, and we shouldn't have to be doing this."

Reinhart-Smith's first protest was a year ago, with Extinction Rebellion in Halifax. Before that, the climate concerns of the grade 10 student at North Queen School were mostly about sea-level rise, intense storms and erosion of coastline property that his family owns in Cape Breton. In the last year he's learned more and been appalled, from environmental racism to the government's contribution to greenhouse gas emissions.

The La Rose v. Her Majesty the Queen lawsuit was announced during a Vancouver climate rally where Reinhart-Smith and the other plaintiffs stood beside Greta Thunberg and David Suzuki to make their case. It's one of nearly 1,400 climate lawsuits against governments and fossil fuel producers worldwide, but it has the unique distinction of using youth voices and lived experience as evidence, and it isn't after money either.

Instead, it calls for a federal court order for a legally-enforceable, science-backed plan that reduces Canada's greenhouse gas emissions and works towards the restoration of forests, wetlands and other natural systems, including oceans, that sequester carbon to stabilize the climate system.

The lawyer on the case, Catherine Boies Parker, whose firm Arvay Finlay LLP is based in Vancouver, says these kinds of cases are happening all over the world. "Young people are realizing that governments are not taking the climate crisis seriously enough and they have to take legal action."

Aside from the legal battle, Reinhart-Smith is working to get more than just governments to take his climate concerns seriously. While he says his family, a lot of his friends and most of the community are very supportive of his climate strike activism, he has come across some friction when talking about forestry.

"It is hard for some people because we do live in a very small, rural community in Nova Scotia...I see logging trucks going by my house every day," he says. Many of his schoolmates' families rely on logging, making it a tough issue.

It's not his hope to put people out of a job. But, he says government has had plenty of time to transition to clean and renewal ways that would ensure jobs aren't lost. "People can make a transition to the green sector, the government just needs to provide funding and training."

His work on the south shore with the Bridgewater chapter of Fridays for Future and the three-member group Nova Scotia Youth for Climate Action (NSYCA) means he's regularly talking to politicians and the media, but he didn't feel it was making a big enough impact.

By joining the lawsuit, he hopes he can get his message to a bigger audience.

Parker says that the kids and teens' legal claim leaves no room for doubt that climate change has disproportionately impacted the physical and emotional integrity of youth. "Part of what the lawsuit does is help the court to understand that these may be complex legal problems but they're complex legal problems that are affecting real individuals," says Parker. It takes the courts' traditional view that climate change is a political issue and makes clear it's a life and death issue. Constitutional obligations are triggered because you can't say to a child 'it's a political issue go vote', because "they don't have that option," she says.

The case stands on three main tenets: two violations of the Canadian Charter of Rights and Freedoms­ (youths' rights to life, liberty and security of the person and violating youth rights to equality) and the Public Trust Doctrine, which requires the government to protect and maintain survival resources for future generations.

Parker says resources that play a fundamental role in the health of the public—and therefore the government has an obligation to protect—are getting so overburdened that they can't do their job of regulating the climate, and that can affect everyone. "The federal government has public trust obligation to ensure that those resources are intact so that they can do their job."

According to Parker, the Public Trust Doctrine is not as developed in Canadian law as it is in the US. She says what is needed is one that's much more "made in Canada", and better able to reflect the multicultural jurisdiction that takes into account both common law, civil law and Indigenous law.

"Almost everything you can think of is tied to Indigenous peoples of Canada," Reinhart-Smith says. "They have been trying to protect the environment for decades, and they've been ignored by the people in power. They are the leaders at this forefront. Now, there's a huge uprising all across the world, but they were fighting for this first, we need to take advice from them because they've always lived on the land."

The legal proceedings are expected to take years. The federal government will likely be preparing a defence in response to the initial claim and Parker says that the plaintiffs will probably attend depositions and may eventually be called to appear in federal court in Vancouver.

In the meantime, Reinhart-Smith is looking forward to things slowing down. He's learning that many youth climate activists are struggling with eco-anxiety and burnout.

"I just like hanging out with my friends, trying to keep things normal in the middle of the craziness that's happening," he explains. He plans to get back to organizing a coffeehouse, playing fiddle, guitar, piano and singing, while the big powers he's challenging are put to work to see how they'll respond to his and the other youth's demands.