The city’s newest food trucks have street-eaters craving more, but an outdated bylaw has put up some roadblocks. Will the trucks stop here? 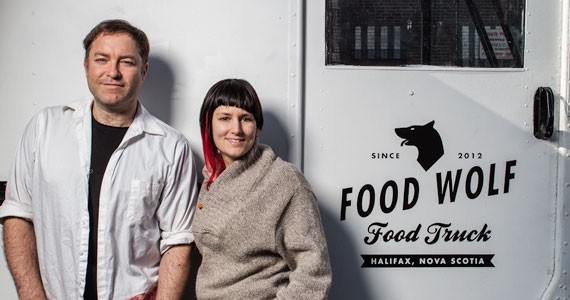 Meghan Tansey Whitton
The Food Wolf’s Virgil Muir and Natalie Chavarie are among the new breed of restaurateurs on the move.

Nick Horne has always been good with his hands.

Growing up, he was taught the joys of gardening by his mother at an early age. In the fall they would harvest, canning and preserving their produce for storage in his family's root cellar.

As he got older, his love of food turned to automobiles. When his brother brought home his first high-school beater, he would spend hours observing father and son fine-tune their cars, waiting for the day he could join in on the tradition.

A love of problem solving brought him to the world of mechanics. For 10 years, Horne spent much of his adult life working for Hillcrest-Volkswagen, chasing the same satisfaction he derived at home while curing his own bacon and charcuterie. He was drawn to the German style of thinking---reliable engineering reflected in the company's etymologyVolkswagen, the "people's car." But as any Type 1 or Type 2 owner will tell you, there's a reason why those VW Campers seem to last forever.

Fixing cars had become mundane. Horne found himself not only working less with his hands, but his head as well, his love of problem-solving relegated to troubleshooting with precision-based manuals for VW's mass-marketed stock. So he did what any salt-of-the-earth mechanic with a passion for cooking would do: he packed up his bags and flew to California in search of a food truck.

"I hate to be cliche, but you only live once. I didn't want to live my life in a garage," he says. "I just decided to take my hobby to the streets and give it a whirl."

Since the early 2000s, independent foodies have been peddling their cross-cultural fusions in food trucks across the west coast. A combination of affordability, accessibility and flavour, the gourmet food truck movement has spread like wildfire through North America, from the hipster elite of Austin and Vancouver, to the aristocratic bourgeoisie of Toronto and our nation's capital.

But outside of the occasional fish 'n' chip trucks of Halifax's tourist-centric past, our city has remained curiously unoccupied. Sure, Bud the Spud will always have a friend in New Yorker food critic Calvin Trillin, and even Dalhousie University has entered the fray with the Lebanese-inspired My Three Cousins (although it's hard to refer to it as a food truck when there appear to be no wheels). But a new breed of young entrepreneurs is attempting to change all that, converting our city's once sleepy urban decay into a full on food truck revolution.

Leading the pack is Natalie Chavarie, a co-owner of north-end upstart The Food Wolf. Since opening during Nocturne last October, Chavarie---along with her husband Virgil Muir and the Good Food Emporium's Eric Gunnells---have fused the heartiness of rice and beans with the expansive flavours of Asian cuisine to create a Korean-taco truck that redefines traditional comfort food.

"We wanted to expand the palate of Haligonians a little bit and let them experience something more along the lines of what we're seeing across North America and Canada," Chavarie says, "which is food trucks that are offering something flavourful, something different, something a little bit healthier and something that draws on some of the multicultural and multi-dimensional culinary backgrounds of Canadians."

But don't call it gourmet. With an emphasis on accessibility, Chavarie says The Food Wolf aims to offer quality, affordable meals. "The word gourmet just doesn't hit it home for me because I think it doesn't really describe the food that we're making," she says. "The food we're making is more comfort food, street food, deep-flavoured food."

To achieve this, The Food Wolf works with a variety of local producers from Halifax farmers' markets, including Getaway Farm, Hutton Family Farms and indie-Mexican supplier El Gallo. "Part of our motto is to just really work with local producers to activate and engage their own capacity and growth as we grow our business," Chavarie says. "It's important for us as a business to keep the spirit of street food as being affordable, so it's definitely a fine balance between sourcing locally where possible and then just recognizing that there are areas that we won't compromise on."

Nick Horne couldn't agree more. As owner of The Nomad Gourmet---a health-conscious, southwestern-inspired fusion truck he opened last September and operates with ex-Coastal@Night chef Graeme Ruppel--- Horne says there's a direct correlation between proximity and quality of food. "Any of the other best restaurants in the city, go look at them and they're choosing local food, not necessarily because it's good for the economy, but because it's just fabulous stuff to work with," he says. "Fresh is best. The closer you get it, the fresher it's going to be."

Expanding on their local-conscientious business strategies, The Food Wolf and Nomad Gourmet have taken to social media to connect directly with clientele in favour of traditional advertising methods. Both businesses use Twitter and Facebook to alert customers about hours of operation, menu changes, as well as new locations.

And when it comes to location, Chavarie says social media is an asset. Located primarily on Maitland Street behind The Bus Stop Theatre, Chavarie says without Twitter The Food Wolf would be invisible to the majority of residents outside the north end.

"If you're not on Twitter or Facebook, there's no visibility there," she says. "I think that the use of social media definitely helps strangers come to the truck and feel welcome. That's the great part about it---creating that kind of customer foreplay."

And whether it's behind the Bus Stop or Nomad Gourmet's bustling Argyle Street location, Haligonians have been embracing these DIY chefs with open arms.

But an outdated bylaw is attempting to change that. Currently, all food trucks in the city fall under bylaw C-500, an antiquated set of rules for licensed vendors that create more barriers than mobility. Modeled around the tourist-friendly fish 'n' chip wagons of the past, under the bylaw's current parameters, food trucks are restricted from operating between the hours of 4 and 9am, making it impossible for vendors to cater to the early morning crowd. "So if you wanted to do a breakfast taco, you wouldn't really have that opportunity if you only started serving at nine," Chavarie says.

For Horne's target market of downtown professionals, he says restricted morning hours inhibit his current business model. "People rushing to work, they want that breakfast sandwich, they want that cup of coffee," he says, "and I think it's a lost opportunity if I can't do that."

On top of shorter operational hours, bylaw C-500 imposes restrictions regarding where vendors can operate on municipal lands. Currently, there are only seven spots classified for food trucks in the city, which are licensed every few years through a tendering process through the HRM. Locations--- such as the sidewalk outside the Spring Garden Road Library---garner more revenue, resulting in higher bids for the property. This means that young businesses like The Food Wolf and Nomad Gourmet would have to spend the majority of their finances to procure a spot with greater visibility.

So in the summer of 2012, Chavarie and Horne joined forces to try and amend parts of the bylaw with city council. The possible amendment fell on the ears of councillor Jennifer Watts, who worked with both businesses to present the motion to the city. "There's some interest in the part of some potential food trucks vendors that there actually be some mobility in the mobile food truck industry," Watts says. "I think if it's properly regulated and approached in the right way that it can really add another dimension to part of the way I think the city wants to go in."

Under the proposed bylaw amendments, mobile food vendors would be allowed to operate during peak morning hours, as well as transfer between locations throughout the HRM. One of the possible ways to do this would be to create designated mobile vending sites where food trucks could pull up and input their vending license number into a meter, which would then charge them by the hour to operate. Chavarie says this could increase revenue for the city and give food trucks the added flexibility and mobility necessary to grow the movement.

The proposed amendment is currently with the city under review, with Watts speculating a possible change occurring as early as spring 2013, which is good news for Chavarie and Horne. With winter currently under way, both businesses have forced themselves to cutback hours. But Horne says a few cold months won't stop him from vending on Argyle Street. "Even if I don't break even during those months, I think it's important to stay on the streets and stay dedicated to my customers," Horne says.

They've also been looking to expand their operations. Horne says that there's growing interest for him to operate in Burnside and Bedford and hasn't ruled out popping up in other areas outside the peninsula as well. Nomad Gourmet and Food Wolf have recently opened for business during Saturdays in the parking lot adjacent to the Historic Farmers' Market and plan to operate there for the foreseeable future.

Horne and Chavarie are also in talks with the Waterfront Development Corporation to open a designated vending site at the Sands at Salter, a public park and beach area located between Bishop's Landing and Salter Street. Although currently in the development stage, Horne says the location would host multiple vendors during the summer months and provide a boost in business during events like the annual Buskers festival.

But whether it's on municipal lands or at local farmers' markets, one thing is for sure: Halifax's food trucks are here to stay.

"The food trucks are not going away," Horne says. "It's in its infancy and I think you're just beginning to see a spark within the culture that's going to be coming."