A look inside Halifax Regional council's head and the next four years | City | Halifax, Nova Scotia | THE COAST

THE COAST
All but one of Halifax's councillors will take their oath of office this evening. Promising to do their very best, not steal, and otherwise work their job in the service of the grand municipality that is HRM.

The reported winner for District 11, Patty Cuttell, won't be joining her colleagues tonight as Bruce Holland—who lost to Cuttell by 26 votes as per first count—has asked for a recount. Assuming the recount–the majority of which are online votes AKA nothing to recount—comes back with Cuttell keeping the seat, The Coast presents a preview of policy direction for the next four years.

We've asked the councillors and mayor 60 questions about who they are, their life experiences, and what they think about the role of HRM in the lives of Haligonians. Their answers give a snapshot into the collective mind of council–which has an average age of 51, zero people who identify as a member of the LGBTQ2S+ community, is 50 percent women and everyone but District 15's Paul Russell says they're a feminist.

(Russell told The Coast in an email that some of the questions couldn't be answered with a simple yes/no, saying:  "The question that I stopped at, the first time, was about whether or not I am a feminist. Do I support women’s rights? Yes. Do I support women’s rights to the exclusion of all else? No. In the same sense I don’t support men’s rights to the exclusion of all else.  Do I think that women and men should have an equal chance at .. whatever? Absolutely, if they can do the job. Does that include to a physically demanding job (the common example is a firefighter)? Yes.
I weigh a little north of 200 lbs. If a firefighter is able to carry an unconscious “me” down a ladder, wearing full gear, then I don’t care if they’re male or female. Are men capable of doing that? Some are and some aren’t. Ditto for women. Since some people aren’t capable of doing that then I don’t want them to be in that role, and some of those that can’t meet the physical requirements of the job are women. Does that mean that I am or am not a feminist?")


Russell, therefore, is considered a "no response" answer, along with District 4's Trish Purdy, who didn't answer repeated emails and a phone call about the survey.

Mayor Mike Savage also said some questions couldn't be answered with a simple yes or no, like whether the city spends too much on policing.

Explore these answers and more on The Coast's HRM Votes app which has been revamped into an HRM council app here. 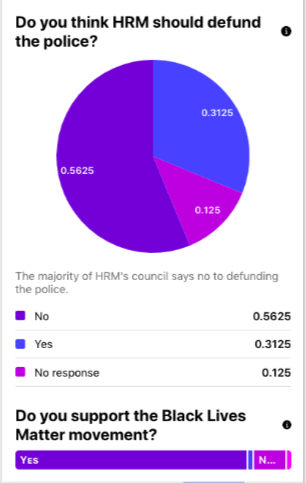 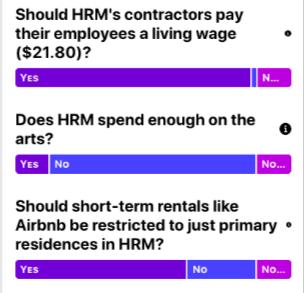 The next four years could be defined by climate change policy, police reform, improved transit, more parkland and even a collection of solutions to the housing crisis. Or council could spin its tires debating a stadium and speeding and snow clearing. With seven new voices at the table—all of them women—we're sure to see some new ideas that could change the course of Halifax.