A dozen awesome ways to spend your Victoria Day weekend

Happy birthday Queen Victoria! We got you these events. 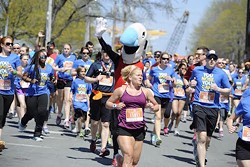 Bluenose Marathon
Run, run as fast as you can.

Whether you're after a new tattoo, chamber music or a parrot's birthday party this Victoria Day weekend, The Coast has got you covered. This handy guide includes a dozen things to get out to see and do.

12. Sports › Scotiabank Blue Nose Marathon. May 20-22
Huff and puff, but cross the finish line! This race weekend is chock-full of races for all ages, skill and fitness levels.

11. Fundraiser › Fort Mac Benefit Decades Dance. Sunday, May 22, 9pm.
Cut a rug for the Canadian Red Cross with DJ Ace spinning the classics and new favourites. All proceeds from this DJ dance party will directly benefit restoration efforts in Fort Mac and folks displaced by the wildfires.

10. On Stage › May We Spook The Shit Out Of You. Friday, May 20, 9pm.
Halifax's drag community knows that the only thing better than Christmas in July is Halloween in May. Bridget Von Snaps, Manny Dingo and Craven Blood host a spooky, sensual soiree with performances by Penelope Strange, Lacey Lovecraft, Penn R. Traytor, Eva Destruction, Oliver Clozoff, Arles Beastly and more!

8. Visual Art › Guided Tour: Gaels in Nova Scotia. Saturday, May 21, 2pm.
Halifax Central Library, The Gaelic Language Society of Halifax and the Gaelic Affairs Division of the Department of Communities, Culture, and Heritage present a guided tour of Gaels in Nova Scotia, a cultural exhibit that explores early Gaelic societies in the province.

7. Workshop › Inside//out: explorations between emotions, guts and poop. Thursday, May 19, 7pm.
Our Resilient Bodies presents this workshop on how digestion and emotion are connected, including stress and trauma's effects on digestion. Poop enthusiast and holistic nutritionist Nicole Marcoux is the evening's facilitator and she'll be discussing such riveting questions as: What can our poop tell us about ourselves? Why is there a taboo against talking about poop?

6. Live Music › Greber w/Anthesis, Heart Attack Kids. Friday, May 20, 10pm.
Two-man supergroup Greber is the brainchild of Marc Bourgon of Fuck the Facts and Steve Vargas of The Great Sabatini. The grind-doom duo are currently touring in support of a split seven-inch release with Anthesis.

3. Special Event › Merlin's Hatch Day. Saturday, May 21, 10am-4pm.
Merlin, the Maritime Museum of the Atlantic's rainbow macaw, celebrates his fourteenth birthday with a party! Beginning at 10am, a scavenger hunt will take place around the museum and arts and crafts tables will be available in the Small Craft Gallery. Merlin will receive a special birthday spray bath at 2pm before it's time for cake and gifts. Merlin is one chatty bird, but here's hoping he doesn't begin to talk back in his teenage years.

2. Theatre › Seminar. Thursday, May 19, 8pm.
Kick at the Dark Theatre Company presents Theresa Rebeck's comedy Seminar, the tale of four young fiction writers facing off with "the worst teacher ever." The young authors get more than they bargained for with their brash and brutally honest mentor and his questionable priorities.

1. Victoria Day › Victoria Day Tea Party. Monday, May 23, 2-5pm.
In honour of Victoria Day, the Lord Nelson is hosting a tea party. Symphony Nova Scotia, Hausmusik and East Coast Carolling provide the musical entertainment. "Queen Victoria" will be in attendance to judge attendees' hats in search of the most fantastical, so don your gaudiest headwear. Tickets must be purchased in advance at halifaxpublicgardens.ca, the Lord Nelson or the Public Gardens coffee shop.

Looking for more? Check out over 100 more weekend happenings here.

7 Sure Things happening in Halifax from March 31-April 8