Halifax's poet laureate on the creature we call Canada. 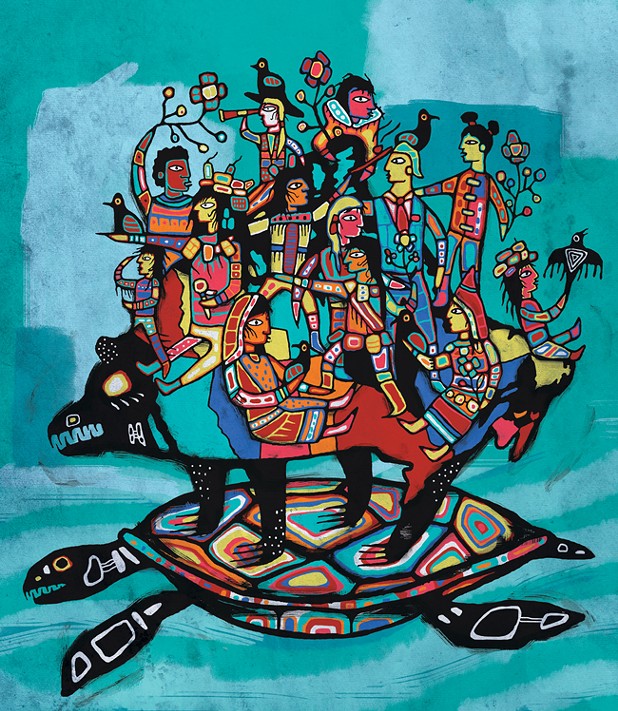 JOSHUA PAWIS-STECKLEY
Wasauksing First Nation member Joshua Pawis-Steckley wanted this cover piece to focus on the positive, future aspect of Rebecca Thomas’ poem, wherein we as Canadians have the ability to guide the blind Creature Canada to where we so choose. “I saw that the creature in the story holds all the negative emotions of our past—the anger, the guilt, the pain and suffering—all within itself. The negative emotions on which our country is built can be tamed and overcome. Rebecca’s story doesn’t dwell on the past; it gives the reader the choice to be a part of the future and opens them up to the idea that we all have the ability to make a difference and be a part of the next chapter.”
Today I’m going to tell you a creation story.

Many of you have heard them before, or at the very least have heard of them. We tell stories to pass on our knowledge, teach lessons and morals. This story is going to be a bit different than any story you might have heard before. It’s not about or coyote, bear or Klu’skap. It’s a new story with old roots that cannot be appropriated.

Long before time immemorial when there were only the plants, animals, spirits, magical creatures and the original people that roamed this there was peace. Yes, sometimes people did not get along, but there was a consensus of how things were and would always be.

There was a balance between Mother Earth and us, her children. The animals gave what they could and we honoured them for their sacrifice. We never picked the first plant, nor the second. We would only begin to pick the third so that we would never pick the last ones.

We lived like this for more generations  than you could count on all the fingers of your family.

Then one day a new creature came to our shores. At first, this creature was small, hidden. We didn’t even know it existed. It came tucked away in the minds of the white man. Finding shelter in the intentions of those who brought it. At first, it did not have much power. It did not have a voice, only an inkling of a presence and we strong. We kept it at bay. We kept it subdued.

Once it took a form, its hunger could not be sated. endless greed consumed all the trees, hunted the animals and fished the rivers until they only knew scarcity. It cracked open the body of Mother Earth and bled her black veins. Choked out father sky with smoke. It always picked the first plant, every time.

The original people were helpless against its will. This creature cared not for our hearts and spirits because it knew that we could stand against it. So it tried to control us. It confined us to the tiniest portions of our land. It rewarded those that would do its bidding with medals of valour and . This creature fed on the languages of our children. Separated families to weaken us. It thrived, nameless, until a dozen generations ago when it was finally given a name.

Canada’s skin was made up of laws. It had sharp claws that raked schisms into our communities so we would fight ourselves. We began to do Canada’s work for it. We shamed our people, we kept ourselves under control out of fear for what Canada might do to us. We had heroes that took but were often punished harshly. Some of us tried to run away, only to discover Canada was vast and cold. Sadly, we had those that gave up the fight. Canada tricked many of our people into believing it was right.

But in the smallest of places, our flame still burned on.

At first, resistance was small. Children - pered their languages out of earshot of Canada in the corners of the schools. We met in secret to share our stories and pass down our elders’ knowledge. We learned from each other. People that once warred were allies exchanging dance and song but always cautiously.

But then one day, unexpected to Canada, the people who brought it to this land started to see Canada for what it was. You see, Canada was only as strong as the people allowed it. Its power was drawn from the hearts and minds of those who believed in it. It became what it was because it only fed on hate, fear and prejudice.

Creature Canada, as strong and powerful as is was, had a weakness. It was blind. Canada couldn’t see another world. It could only see what it thought the world should look like. It could not see what we did behind its back. It could not see in the peripherals. Though it was strong, the strongest the first people had ever met, because it had no vision, we were able to resist and persist.

We created . We wrote them down together, the original people and the newcomers. They were promises to each other that would live on generation to generation. These promises still exist and are used to keep Canada in check. Though it might try to break these bonds, as long as we are still breathing, they cannot be undone.

Today, Canada is still alive and well. It continues to pull power from the broken body of Mother Earth. It continues to feed off our spirits through neglect and hopelessness. But all is not lost. Because it is blind, it can be led to where we want to take it. The story is not over. Will you help us write the next chapter?