A bar of one's own

Wet your whistle with this guide to the city’s campus watering holes. 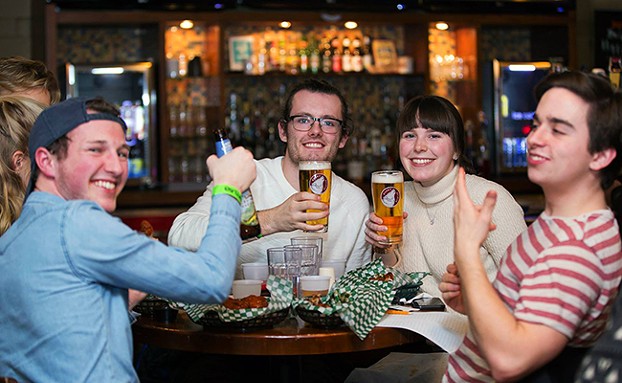 The Grawood Beer Bar & Eatery
Dalhousie University Student Union Building, 6136 University Avenue
This student-union-run beer bar pours up 16 draught taps, featuring local faves and domestics, and also is a fully functioning restaurant, serving lunch daily and hosting Wednesday night burger nights and Thursday wing nights. Though there’ll be plenty of opportunities to dance the night away to DJs and live music, there’s more where that came from, campus keeners. Test your brain at trivia on Wednesdays or play sex toy bingo/try a tune at mic on Thursdays (not a combo, they alternate weeks).

The T-Room
1360 Barrington Street
Nestled away in Dal’s Sexton Campus you’ll find the T-Room in all its no-frills glory. This fixture has been a spot for soon-to-be engineers to take a load off since when Frederick T. Sexton opened it to students of what was then known as the Nova Scotia Technical College. Now, patrons enjoy free games of pool, heated shuffleboard battles, cheap pints of craft beer and one of the city’s hottest trivia nights at this student-union-run spot. Friday nights are the night with award-winning trivia (with smarty-pants hosts Ben and Stan) and afternoons with $12.50 buckets of Keith’s.

The Wardroom
University of King’s College, A&A Building, 6350 Coburg Road
Kind of like hanging out in a friend’s basement, but with more philosophical debates and a members-only policy, The Wardy’s beloved by King’s students past and present. Exercise your brain further during bi-weekly trivia (Tuesdays) and your vocal chords during the twice-a-semester Queeraoke or check out local and touring acts (like Century Egg and Chudi Harris) for free if you’re a UKC student. Badass dance parties that pay tribute to genres like disco and new wave are a regular and beloved occurrence, as is happy hour (4-8pm), which is pretty much perfect for post-class libations—in the name of reflection and analysis, of course.

The Gorsebrook
Saint Mary’s University, Student Union Building, 923 Robie Street
With 13 draught taps and affordable drink prices all around (look for solid happy hour deals and $3 cocktails on Fridays from 7-11pm), SMU-goers will want to make sure this is a place that knows your name. Whether you’re pre-gaming before a football game or ducking in for a $7 breakfast and a Caesar on a Friday morning, The Gorsebrook has your back when it comes to snacks and adult beverages. Wednesdays bring cheap wings and trivia to the table for good clean fun and thunder mugs, but the biggest party of the week is Thursday nights.

Pilot’s Pub
NSCC, 10 Atlantic Street, Dartmouth
So NSCC’s Ivany Campus (AKA the waterfront one) doesn’t have a pub of its own, but it does have one basically in its backyard. This Woodside bar serves up the classic pub grub and boozy options that one might need after a long day of learning. If you’d rather your study fuel with a side of tartar sauce, check out the other nearby institution, John’s Lunch.

Vinnie’s Pub
Mount Saint Vincent University, Rosaria Student Centre, 166 Bedford Highway
OK, so your cab ride to downtown from Vinnie’s isn’t great, but Vinnie’s is. And the wet/dry status here means pre-19s can still have good, clean fun alongside their legal classmates—a score for those with late birthdays. Cash in on daily drink and snack specials after class and keep your eyes peeled for trivia, open mic, live music and comedy sprinkled amidst the many unforgettable Thursday-night ragers.

Art Bar + Projects
NSCAD Fountain Campus, 1873 Granville Street
The least campus-bar campus bar in town, this venue’s a favourite destination for not just NSCAD students looking to procrastinate finishing their latest work, but any local art-lovers in the know. One of the city’s sources of performance art, Art Bar regularly hosts A-plus events that cover everything from live music to screenings to workshops to sales to book launches, art openings and dance parties with the most interesting DJs around.

The eternal sunshine of Judee Sill