Danny Chedrawe says the recently fired Bob Bjerke showed poor leadership by not meeting with him. 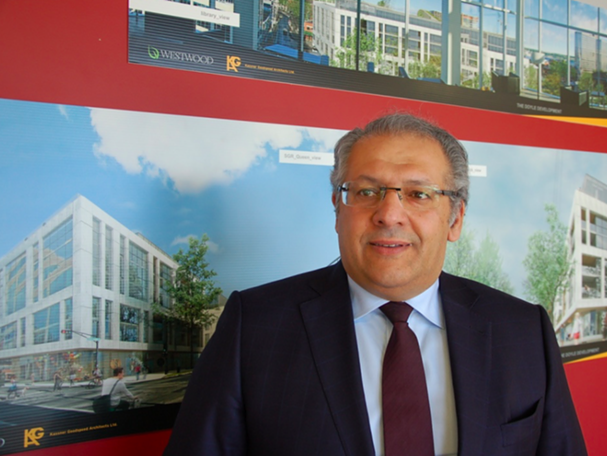 The Coast
Westwood's redevelopment of the Ben's Bakery site has been delayed two years waiting for the Centre Plan, says Danny Chedrawe.
One of the city’s biggest developers claims he was ignored by Halifax’s ousted planning chief. It’s one reason why Danny Chedrawe doesn’t think Bob Bjerke was up to the challenge of leading HRM’s planning department.

Last week, chief administrative officer Jacques Dubé dismissed director of planning and development Bjerke after three years on the job and with little explanation. The abrupt staffing change came as a surprise to regional council, city hall staff and the public.

Chedrawe, president of Westwood Developments, says Bjerke is a “decent guy” but “not a great communicator.” Despite his company’s large portfolio of construction projects, Chedrawe says he only recently sat down with Bjerke face-to-face.

“You’d think the chief planner would want to meet with me to try and influence what I’m doing,” he says. “It just shows he was more on his desk. A position like that, you’ve got to show strong leadership…I didn’t know what his vision was for the city because he never communicated to me.”

Bjerke counters that narrative. He says he spoke with Chedrawe many times at public events and internal planning but does admit it was only in the last few months that he sat down for a closed-door meeting about the developer’s specific concerns.

“He has a very selective memory,” Bjerke says. “I’ve always met with people when they asked.”

The former planning chief also disputes accusation that he never communicated his vision. Bjerke says he put a lot of time into building relationships between his department and the development community—attending regular meetings with developers and the mayor, speaking at public events and producing multiple reports outlining the department’s plan for HRM’s growth.

“I think it would be difficult to say there isn’t a clear statement of vision.”

The difference may be who the municipality is communicating its vision with. During the last few years, the planning department has increased the professional standards and technical studies used to inform its decisions, says Bjerke. Along with those changes has come extensive technical and public consultation for projects like the Green Network, Integrated Mobility and Centre Plans. So it might not be how much he engaged with the development community, Bjerke suggests, so much as that his department started engaging with everyone else.

In an interview conducted a day after his departure, Bjerke told The Coast his dealings with Halifax’s “strong and dedicated” developers were always “very professional.” Nevertheless, he was familiar with the “dynamic” of developers complaining about HRM’s planning process even before starting his job.

“There will always be complaints, and that’s not unique to this municipality,” he says. “Everybody would like things to be done faster, but it’s also about making sure you get the right outcomes as much as it is the speed of the process.”

Speed has been a routine complaint from those in the private sector—and by proxy, some councillors—about the city’s planning process. Bjerke says his former colleagues have been making progress in decreasing application timelines while labouring under a very ambitious planning agenda with aggressive deadlines

But Chedrawe remains unimpressed. He claims the incredible amount of development happening in HRM has caught the planning department off-guard. Regional council has a “moral obligation” to “open the pipeline” and allow more housing development, Chedrawe says, but the city has been hijacked by “elitists” like the planning advocates in the Willow Tree Group.

“They do not have strong leadership and strong vision right now guarding the ship,” adds Chedrawe. “There’s a lot of frustration out there.”

According to the developer, that frustration boiled over and put Bjerke on the chopping block.

“Was it justified or wasn’t it? I can’t answer that,” Chedrawe says. “But it’s a shame because that’s not going to fix the problem. The problem comes from council down.”

Bjerke is still keeping quiet on the details of his departure. He declined to comment about former boss Jacques Dubé—“I think I’ll just leave that for another time”—but does tell The Coast he’s looking at his options.

Despite their different perspectives, Bjerke appears to agree with assessment that it will take strong leadership to keep developing HRM’s planning department.

“There’s definitely work to be done, but I’d say a lot of it is happening,” Bjerke says. “Whether that’s something that there’s a commitment to continue, I can’t say at this point.”