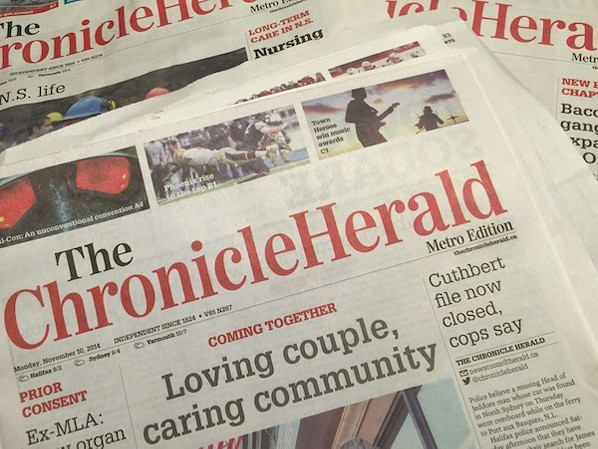 THE COAST
Better than a kick in the teeth, as they say.
More than half a million dollars isn’t bad for a government rebate, especially in the newspaper business.

The Chronicle Herald’s Saltwire Network received $664,474 in federal funding this year as a direct result of buying up the competition’s newspapers in Atlantic Canada.

It’s money that would have gone to Transcontinental but hadn’t yet been awarded by Canadian Heritage before the historic deal between the Herald and TC Media was finalized in April.

Canadian Heritage spokesperson Jon Schofield confirms via email that funding for 15 of the newspapers acquired from Transcontinental transferred over to . Those outlets include seven community newspapers in Nova Scotia: the Amherst News; the Annapolis Valley Register; the Aurora; the Citizen Record; the Queens County Advance; the Valley Journal Advertiser and the Tri-County Vanguard.

Money from the federal Periodical Fund program was also received by seven Saltwire papers in Newfoundland and Labrador (the Northern Pen, the Beacon, the Labradorian, the Packet, the Gulf News, the Southern Gazette and the Compass) and one in New Brunswick (the Sackville Tribune Post).

The Canadian Periodical Fund is a $78-million government subsidy from the department of Heritage that’s available to publishers of magazines, digital publications and non-daily newspapers with paid circulation.

It’s the same funding stream that publishers’ lobby group News Media Canada wants the Trudeau government to expand into a $350-million annual revenue source to fund newsrooms across the country.

Mark Lever, and CEO of the Saltwire Network, is also on the board of directors at News Media Canada. Last November he appeared before a Heritage committee meeting pleading for public intervention in the newspaper industry and asking the department to consider opening the Periodical Fund’s eligibility up to daily newspapers.

Lever didn’t respond to questions about the fund sent via email, but Canadian Heritage confirms the Chronicle Herald corporation didn’t receive any money from the Periodical Fund last year before the Saltwire deal. Publishers need to reapply for funding every year.

Saltwire also benefits from other, indirect government subsidies in Nova Scotia. Provincial laws require notifications of public meetings and other government business needs to be advertised in a “paper of record.”

As the only daily newspaper delivered throughout the province, the “paper of record” is the Chronicle Herald.

Last year the Herald received $324,991 from the Public Service Commission in such government . That’s down from $600,000 four years ago.

The potential for a new and ongoing annual influx of public money doesn’t hurt considering the company spent close to $25 million to buy Transcontinental’s 27 newspapers and four printing plants.

Katherine Chartrand, spokesperson for Transcontinental, wouldn’t confirm a sale price for the Saltwire deal, but did say the company received a large cash payment in the second quarter of this year.

“Overall, in Q2, TC Transcontinental received $25 million for the sale of assets, mainly from our media assets in Atlantic Canada,” writes Chartrand [emphasis hers].

Canadian Heritage says Transcontinental received $815,000 during the previous year’s funding cycle for 19 of the 27 newspapers it would later sell to the Herald. Nine of those outlets—worth $423,227 in grants—were in Nova Scotia.

Despite the millions of dollars received every year, the government subsidy hasn’t stopped Transcontinental from stepping back from its newspaper business. The company still owns 88 newspapers in Quebec and Ontario, but it’s in the process of selling those off just like it did with its Atlantic Canadian outlets.

At the time of sale back in April, the Herald was still mired in a protracted strike with its unionized newsroom. Halifax Typographical Union president Ingrid Bulmer issued a statement in response, saying the Saltwire deal showed the company was in far better financial position than it had claimed during collective bargaining.

“We were told that the Herald’s demise was imminent if it didn’t immediately cut wages and other benefits to newsroom staff,” said Bulmer. “Apparently, that was a total fabrication. The company is not struggling but is instead planning to expand.”

The strike finally ended last week, after two days of provincially ordered mediation and the threat of a government inquiry that would have opened up the Herald’s books to the public.

The 25 remaining members of the HTU that weren’t laid off or didn’t take buyouts will return to work Monday morning, greeted by a five percent wage cut and longer work week.