Bring your dog to work day, every day

Animals in the office can lower stress and increase productivity—if they’re well-behaved.

Once or twice a week, when you visit Patagonia Halifax, you might catch Daisy during one of her shifts. She's not paid much, but she's been working there since she was eight weeks old.

Clark is a salesperson at Patagonia, and he's been bringing Nova Scotia Duck Tollers to work with him for four (dog) generations, starting back when he used to own and run The Trail Shop on Quinpool. 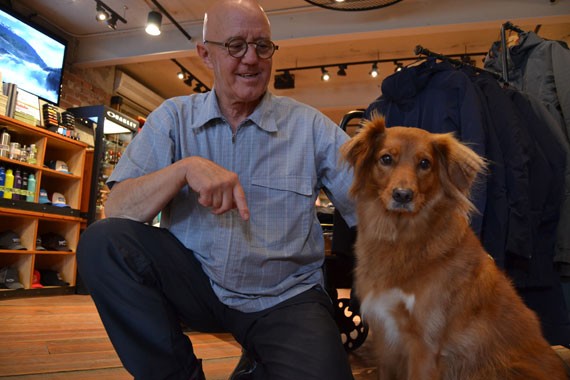 More and more, offices and businesses are opening their doors to our canine comrades. Pretty much the entire shopping district on Quinpool has begun accommodating dog owners so they can bring Fido inside while they shop, and many offices allow employees to bring their dogs in from home for the day.

"You have to like dogs in order to work for the company," says Tara Migel, a programmer at a local IT firm who owns a boxer named Finnegan. "Mine's not the only one, either. There can be up to five dogs in there on any given day."

Is this trend merely a conciliatory measure, to attract customers and the best talent? A dog-friendly workplace is a fringe benefit, sure, but there are definite boons for dog owners and their dogs.

Guy Lapierre is a professional dog trainer with the Halifax chapter of Unleashed Potential, and he can see why so many employers like to give their staff the option to bring dogs to work.

"You might see an actual increase in productivity," says Lapierre, who says a dog can help you mentally leave the work environment, allowing you to return refreshed. "I think they'd probably get more of a true break if they were to go interact with their dog. During that break time, they probably completely forget about work."

Migel, a client of Lapierre's, agrees.

"He helps keep my stress level low," says Migel, who takes Finnegan to Point Pleasant Park every lunch hour. "If you're having a rough day, just go over and pet the dog for a minute. It helps calm you down, gives you a nice break."

Of course, that gain in productivity is only possible if the dog behaves, and the owner doesn't have to spend the entire shift cleaning up after it. But the workplace can actually help dogs flex their obedience muscles.

"I think it's a great opportunity for the dog to exercise and practise their impulse control," says Lapierre. "When they go to work, they obviously can't be jumping on people or on desks, or stealing stuff out of the garbage, or that kind of stuff. You'd have to have a dog that listens."

"It makes a huge difference in their socialization," says Clark, who says Daisy often surprises customers by being so well-mannered in a store environment. "That's purely because of her spending time, being out, getting lots of attention."

Lapierre says most dogs can be trained to be workplace compatible, save for the dire cases where getting them to be 'manageable' is the best case scenario. He also recommends against bringing them every day, because if they're never alone, they can't develop severe separation anxiety.

"When dogs come to work," says Clark, "everybody at the workplace is happier."