Into the Wild blue yonder 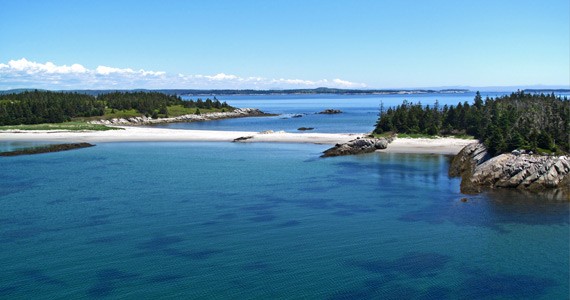 Nova Scotia Nature Trust
These are the views you're missing out on.

White sand beaches and turquoise water aren’t far from downtown Halifax. Located an hour from the city are nearly 300 islands stretching along the eastern shore from Clam Harbour to Mushaboom. The 100 Wild Islands archipelago stretches for over 30 kilometres and is the largest coastal island wilderness area in Nova Scotia.

That’s why the Nova Scotia Nature Trust is working with HRM to ensure the islands are preserved for future generations.

In August, Halifax Regional Council voted to donate $300,000 over two years to aid the nature trust in protecting the islands. This past month, mayor Mike Savage helped launch the Friends of the Wild campaign to encourage citizens to help with that preservation.

The cost of preservation is worth it to Councillor Gloria McCluskey, who’s father was born on one of the islands.

“I think it’s a great plan,” she says. “Those islands are priceless.”

Councillor David Hendsbee, who brought the motion to protect the islands forward at a council meeting last April, says the wilderness area is a gem to be preserved.

“You think you’re in the Caribbean when you see the white sand and emerald waters,” he says. “It’s just incredible.”

Check out what else visitors can see on six of the most interesting 100 Wild Islands.

The diverse island is also home to a rainforest with deep moss and old man’s beard (usnea) hanging a foot from the trees. Shelter Cove is connected to the main land and can be accessed by foot during low tide.

“You don’t need a boat, you can actually just park your car (and) walk along this beautiful trail we’ve constructed,” says the Nature Trusts’ conservation manager, Peter Green.

Shiprock Island
This small group of islands is named after a steep, sheer cliff that resembles the sail of a ship. Green says he’s heard it was used for target practice by French or British soldiers in the 19th and 20th centuries.

“They would basically sit out in the waters off shore and just lob cannonballs at it,” Green says. “Apparently you used to be able to dive below the cliff and find the old cannonballs there.”

Roots sticking out from the cliff give rock climbers the opportunity to scale the 400-million-year-old rock-face.

Wolfes Island
Both Sutherland and Green agree, Wolfes Island has the best and biggest white sand beach. When the Atlantic Ocean feels too cool, Sutherland says Wolfes Island also has an alternative swimming spot. Long Creek is “warm enough for reasonable people to swim,” she says. It’s a great snorkelling spot, adds Sutherland. Lobsters, clams and muscles are all visible in the clear water.

Baltee Island
Small pocket beaches sit on Baltee Island. “You can just have your own private little beach,” says Sutherland. Trails on Baltee lead you to an exposed cliff with massive waves smashing against the shore, similar to Peggy’s Cove. Sutherland says a shallow area of the island with transparent water is perfect for paddling.

“You’re looking down and you can see the kelp beds and the eelgrass and all the plants and the marine life.”

Gerard Island
In the middle of the horse-shoe-shaped island sits the baleen, an area where marine life gathers.“At low tide, you can see 30 to 40 seals,” says Sutherland.

Gerard was once home to a small community. Nearly 60 people lived on the island prior to the Second World War, building a post office, road and schoolhouse. Remnants of the old community can still be found. Gerard is where councillor McCluskey’s father was born and met his wife, a teacher who came to work in the island’s schoolhouse.

Borgles Island
A long white sand bar sits between two beaches on Borgles. Tucker’s Head, a spot with a view of the rest of the islands can be reached by paddlers and hikers.

Green says Borgles was the most threatened island by potential development. Recently, a developer hoped to clear cut the island, making way for homes and a golf course. Now, Green says the no trespassing signs the developer stuck up will be removed and the island will be preserved.

“It’s staying as is and people can continue to enjoy it,” he says.