Guy Tipton has changed the local craft brewing game with his at-home invention, the bubble-making FizzWizz. 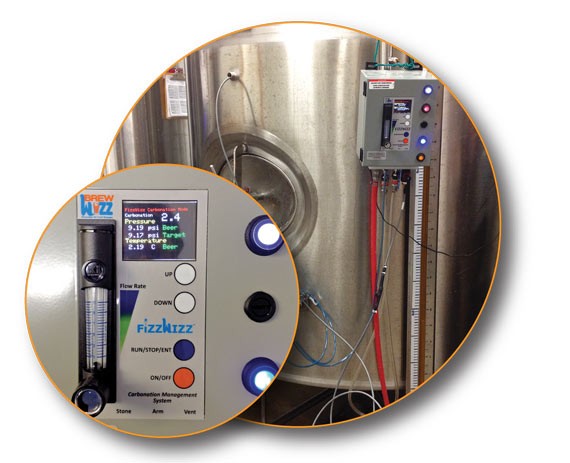 Guy Tipton created FizzWizz in his attic with a bicycle pump and a fish carbonation tank.

Guy Tipton says his invention, the FizzWizz, came to be quite unexpectedly. What began as a mini-home project evolved into a state-of-the-art carbonation system that helps craft brewers maintain consistency and control over their final product. But Tipton's motivation to take on this endeavour only began when his wife Emily and their friend Henry Pedro—both budding home-brewers and trained engineers—began crafting what we now know as Boxing Rock Brewing.

"It takes a heck of lot, going from basement brewing to owning a company," says Lipton. "It's certainly a technical leap on many levels and a lot can go wrong. One of the main things was the carbonation levels of the beer, and that can be complicated for a number of factors."

But Tipton lays it out simply for us: No one wants a flat beer, they want carbonated consistency.

A highly valued product, each frosty pint of craft beer accents the brewer's labour intensive initiatives through the authenticity, precision and a complexity of ingredients. So, while Boxing Rock never had a problem producing a tasty brew, Tipton says he saw the limitations within the technology that's available to brewmasters. The art of perfecting their carbonation levels requires the brewers' almost constant attention, and Tipton wanted to fix that.

"I was in my attic, no word of a lie, with a bicycle pump, a bag of ice and some pressure sensors and a fish tank carbonation tank—as rugged as you can imagine it," he says. "For months I was mucking around making the production code and getting displays working."

Tipton produced a makeshift machine that helped fix the troubles both his wife and Pedro had encountered.

"But then we got a visit from brewer Mike Hogan of Upstreet Brewery," says Lipton. "He asked, 'Can I buy one off of you?' I gasped, 'I never really thought of it like that.'"

From there, Tipton worked closely with his employers at Allendale Electronics who helped produce the unit on downtime. After 16 months of on-and-off labour, and six variations of the mechanism, Tipton had the FizzWizz.

A portable machine that hangs on your beer-brewing vessels, it uses automation technology to accurately control the rate and finish of brew carbonation with the push of a button. Similar to a slow-cooker, Tipton says brewers can set and forget, until the golden hour of bottling begins.

When FizzWizz officially launched in January, it was immediately acknowledged by Innovacorp and was awarded The Winning Start-up in the agricultural technology sector. While no stranger to invention, receiving this recognition was most exciting for Tipton because FizzWizz is the first invention he's patented.

Tipton has sold his innovative contraption all over the Maritimes and is beginning to span westward. By the end of March, 16 of your favourite craft brewers will own FizzWizzes. Have you noticed better-balanced, crisper or fizzier pints at your local watering hole? Yeah, you can thank Tipton.