Last week, the Atlantic Filmmakers Cooperative aka AFCOOP announced the 2016 winners of the Film 5 program in which aspiring and emerging directors, producers and crew produce a five-minute film from script to budget to star-studded premiere. With two phases — Program Development (Phase I) and Production (Phase II) — participants experience the full range of filmmaking on a manageable scale to gain the skills to produce films on a larger scale. Hollywood, baby. Since 1994, Film 5 has provided training to hundreds of film professionals. Every year, four teams are selected by a jury to receive training, mentorship and over $30,000 in cash and services to produce a five-minute film. Grads of the program include Jason Eisener, Andrea Dorfman, Andy Bush, Jay Dahl, Ashley MacKenzie, Thom Fitzgerald and many more.

Despite an earlier potential loss of funding to the program because of the dissolution of Film & Creative Industries, along with the devastating impact of the Liberal changes to the Nova Scotia Film Tax Credit on the entire film industry, the cameras will roll. This year's projects:

Black Guitar
Director/writer: Devin Cesario
Producer: Todd Fraser
Synopsis: A weathered troubadour in the midst of a tailspin travels through a dark night of debauchery and self-destruction that can only end in one of two ways: death or death by epiphany.

Charlie's P.O.C.
Director/writer: Kevin Hartford
Producer: Thom Payne
Synopsis: A year and a half after their breakup, Charlie returns to the apartment he used to share with his ex to pick up some things he left behind, but after a surprise encounter with his ex's mother, Charlie realizes he may have left more behind than he originally thought.

Tipping Point
Director/writer: Stephanie Young
Producer: Jack Ivany
A painfully shy barista is crushing on a customer who turns out to be a not-so-shy burlesque performer, and must overcome their own self-doubt to tell her how they really feel.

Don't Be Late
Director/writer: Nicole Holland
Producer: Jessica Smallwood
Brandy prepares to go out on a first date with a man she met on the Internet. She is severely delayed when she hits a strange, otherwordly creature with her car. Maybe it's for the best. 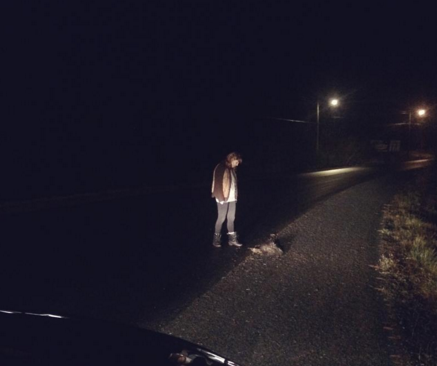 Jess Smallwood
Nicole Holland location scouting for 'Don't Be Late'
"Nicole and I decided to apply to the FILM 5 program last September," says producer Jessica Smallwood, a film fanatic and co-organizer of film series Thrillema. "When I read the script for Don't Be Late, we started collaborating on ideas and it slowly evolved into something more like a horror or subtle genre film. We plan on showcasing rural Nova Scotia in an unconventional way through the horror genre and we hope to shoot in Prospect, where Nicole grew up." Heck yes.

Smallwood continues: "As women who love genre film, we are excited at the opportunity to create a relatable female lead who isn't portrayed as a victim, an accessory, or is over-sexualized. In a genre predominantly dominated by men, it's exciting to be able to contribute and show our individual points of view. We are excited about being mentored in this program by some of the best filmmakers in the industry and look forward to applying to festivals around the world."

"This is an important year for the FILM 5 program," says Martha Cooley, AFCOOP's Executive Director. "In the wake of the changes to our industry, providing opportunities for emerging Nova Scotia talent is more important than ever. FILM 5 is grateful for the ongoing support of the film community and we look forward to this year's projects." So do we! Congratulations, Film 5'ers.