AFF Review: Sloan at The Marquee | The Coast Halifax

AFF Review: Sloan at The Marquee

Halifax homedogs celebrated with free donairs, the Marquee and the moon

Sloan
Sloan's 2014 release Commonwealth
On Saturday night, Toronto-Halifax's Sloan returned home to celebrate the 35th Atlantic Film Festival at a pass-holders special event at The Marquee Ballroom. There were also performances by The Brood, Rose Cousins and Buck 65 but I only made it for my Sloan dogs.

The whole set was a mixed bag, with cuts from Commonwealth between the classics: "C'Mon C'Mon" (Navy Blues) into "Carried Away" (Commonwealth) then back into the oldies, "Good in Everyone," "Snowsuit Sound," "The Other Man," which I sang pretty loud. Patrick Pentland seemed kinda stiff. Chris Murphy gave out high-fives and was kinda goofy. Jay Ferguson seemed very chill. Sometimes Andrew Scott, probably one of the best Canadian drummers, just becomes the drum kit. They jammed another Commonwealth track ("Keep Swinging") before "Who Taught You to Live Like That?" (Never Hear the End of It), which gave way to the night's most impressive song (and my new favourite from the album): Andrew Scott's "Forty-Eight Portraits."

Last fall, Sloan released the double-LP, Commonwealth, and unlike any other release, the band made a distinction by grouping the songs by songwriter rather than mixing the tracks as usual. It was a significant stylistic change that demonstrates each member's individuality, with a pun, as well, on the band's financial and administrative policies — Commonwealth implies the band's practice of splitting everything four ways. It's probably one reason they've been able to continue working together for over 20 years. Because, and here's another *Sloan-nerd alert* moment — Sloan has always produced hits, but not everyone is writing them. And by hits, I mean radio hits; some of the most cherished Sloan songs never hit the airwaves. But airwaves = money and so the idea of 'commonwealth' works to reduce an egoistic tension in the band, and anyway, everyone is playing those songs together. But it's always been said that some Sloan songs have incredible merit and yet rarely achieve 'hit' status or whatever. I think "Forty-Eight Portraits" is one of them.


A few years ago, I interviewed Andrew for a music magazine. When he's not drumming in Sloan, he's painting in his west-end Toronto studio garage. He's an incredible visual artist, and back when he was a student at NSCAD, his grad show "48 Portraits" at the Anna Leonowens Gallery featured the installation of 48 Richter-esque dog portraits, all of which blended photorealism and monochromism that are still features of his work. In our interview, Andrew went into great detail about his creative process, about his time at NSCAD, about the influence of Richter's own "48 Portraits" and how all of his artistic practices have the same motivations.

Is it a coincidence that I got Andrew talking about his art and then a little while later, he named his epic 17-minute song on Commonwealth "Forty-Eight Portraits," as well? Maybe but I don't actually know. The timing works out, and that'd be pretty cool. But either way, *Sloan-nerd alert*

Mostly, "Forty-Eight Portraits" is a killer track and I'm glad they played (most of it) live. It starts off with a dog barking, presumably Andrew's own dog, with some noise interludes and odd piano scales, which appear all over Sloan's catalogue. Then it veers into that particular Andrew quality, which is always retained in his songwriting. Andrew's songs are always the darkest, the most experimental and the least "Sloan," even though this one has some pop-melody moments, as well, but more classic pop like ELO or the last bars of "I Want You," and then a choral ending. "There's a tunnel I can't see through," he sings. What a fucking sick and multifaceted track. It was great.

They switched it all back up and hammered out "Losing California," "The Rest of My Life," "The Lines You Amend," "Penpals," and then "Money City Maniacs," before a "Coax Me" encore. Every time I see Sloan I feel a little bit older, maybe because they look a little bit older, and we're all getting old here, but it doesn't seem to matter how many times I hear some of these songs, I still get flashbacks of moments in my life to which these songs belong. Seems appropriate that Sloan songs are on movie soundtracks when so many of the albums are life soundtracks.

At the end, I realized that the hundreds of free donairs weren't being eaten so I took home as many donairs as I could carry, which means there were about 30 donairs in my fridge all weekend and I've eaten so much fucking donair, I never want to see one again. But this donair jackpot led to some great puns made by me, including: Slonair, Twice Donaired, Donair Blues, Donair Pact, 4 Nights at the Donair Royale, and many, many more. Hopefully we get to see Sloan again soon. 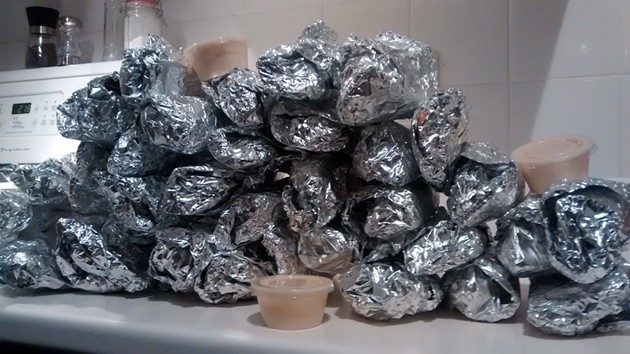 The Lines You Donair