Whatever happened to the Connaught Pharmacy?

Remembering one of the city's more mysterious businesses. 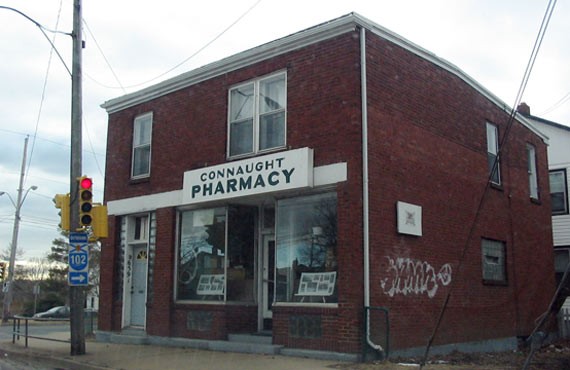 Chris Campbell
Wanda Bianco owned and operated the pharmacy from the 1960s until 2007.

Five years ago, the Connaught Pharmacy on the corner of Chebucto Road and Connaught Street disappeared the same way it existed for decades—silently.

For the last few decades of the shop's existence, its doors were always locked. A large sign reading Connaught Pharmacy in faded green letters was the only indication the building had ever been home to a business.

Decorations featured in the storefront windows included black-and-white photographs, a banner reading "Unborn babies are special people, let them live" and a velvet painting of a vampire.

But while generations of Haligonians have grown up in fear of the building, Robert MacLellan fondly remembers the days when the Connaught Pharmacy doors were open for business. "One of the first times I visited the store was to buy radio tubes for an old-style radio back in the mid-'60s," says MacLellan via email.

"I thought my friend Jimmy had it made living above a pharmacy," he says. "It was open until late and almost always open on Saturday and Sundays. We could always go down and get a bag of chips and pop while watching the hockey game on Saturday night."

The pharmacy framed a busy intersection for 55 years, opening in 1951 as the Campbell Pharmacy—the namesake of its owner, Malcolm Campbell.

It was renamed Connaught Pharmacy under new management four years later. In 1960 ownership switched again to Dalhousie pharmacy graduate Wanda Bianco, who managed the business for the rest of its existence.

By the 1980s, the pharmacy was a mystery to one of its own employees.

Colin MacDonald delivering drugs to Connaught Pharmacy customers and worked the register from 1977 to 1980. He says the lights were only on when necessary.

"I was not sure whether we wanted customers or not as the store always looked closed," he says. "We did watch a lot of TV in the back room.

"The inside of the store was old, very old. There was lots of stock on the shelves that I thought could have been there when my mother was a child in this city," he says. "This was a very small family business; there was only myself and the owner. The bread and butter for the store was the prescription drugs for people living in the area."

MacDonald remembers arriving to work one day to find an empty store. After he called out to see if anyone was there, Bianco came out from the washroom.

"She came out upset and said she'd been robbed earlier in the day, and was told to get in the washroom and stay there," he says. "She said she spent three hours in the washroom and heard people coming in and out of the store but was too scared to come out."

While the storefront remained unchanged for decades, Bianco still filled out prescriptions for familiar customers until the end of 2006.

In 2007, The Coast reported that the doors of the pharmacy were locked due to robberies. After a period of not opening for over six months in 2007, the building lost its commercial status.

Bianco, a daughter of Italian immigrants, died with friends by her side in 2012.

Renovations in 2010 completely remodeled the pharmacy into a hearing aid clinic with brown panelling, shushing the question that named a 2002 song by Halifax band The Hemingways: "What the hell's with Connaught Pharmacy?"

To MacDonald, the renovations were a welcomed change.

"I really like the look of the new building, it has character," he said, interviewed in 2011. "The old structure needed a major overhaul."