“How many Polaris musicians have played in a dirty yurt?” 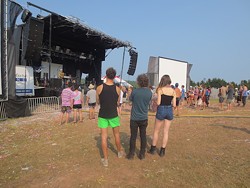 It’s been a few years since my last trip to Evolve and I was finally feeling groovy enough for 24 hours of the three-day peace, love, camping and music experience on rolling hills near Antigonish. After threat of cancellation last week due to a whack insurance policy, Evolve went on! The lineup was one of the most thematically consistent to date, with more electronic, dance and reggae acts than rock or folk. This gave Evolve strong waves of positive vibes; upbeat tempos create natural movements and warm energies.

As always, it was wild. Some of the crazy things I witnessed include: boobs, a couple having sex out in the open, a nerd in a dinosaur costume tripping on acid, a guy playing a full round of invisible golf, about a dozen massage-trains and three different penises. Between all of this madness was incredible music.

Just as we arrived, Hamilton's B.A. Johnston played in the Palace Yurt. After pouring beer all over himself, he did the worm on the dirt floor and made a mud mess, then rubbed his mud mess all over people. I had to change my shirt. He called a couple clean-cut dudes “narcs” and then asked, “How many Polaris musicians have played in a dirty yurt?” His leg bled through his pants. He’s a true showman.

After that, I caught Halifax’s Aqua Alta on the main-stage, led by Jenn Grant with Charles Austin, Matt McQuaid (Holy Fuck) and Seamus Erskine on the kit. This band brings out a sassy side of Grant. Her vocals moved from whispers to bold delivery and the textures that the band created were hypnotizing. See them on August 5!

It got dark and I stood transfixed by Iowa's Little Ruckus (Dom Rabalais), whose love song techno-cabaret was set in contrast by his self-made Lynchian video projections. We hung out for the rest of Evolve and he rules; his art projects are amazing. 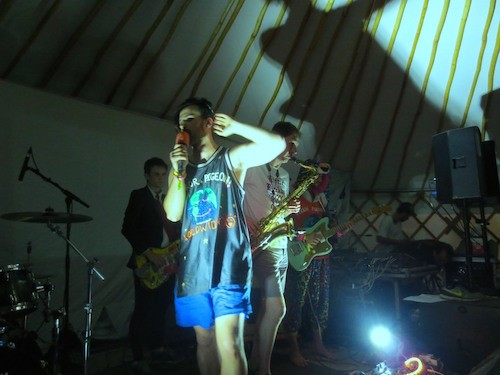 Then Tennessee's one-man-mantra-band Terror Pigeon Dance Revolt was joined by Little Ruckus, members of Austin psych-folk ensemble Calliope Musicals and Halifax’s sexy sax man Nathan Pilon. It was a neon-sequin near-gospel experience of existential empowerment: “Go and fuck the shit out of your dreams.” Then we all hugged.

The yurt turned electric royal blue for Toronto electro-noise act Doldrums (Airick Woodhead). He and bandmate Alex performed a minimalist DJ set and I got lost in the industrial heaviness. His main stage experience earlier that day was also unreal, and soft but terrorizing. I can't wait to see him at Sappy Fest.

Rich Aucoin
Later in the night, Rich Aucoin stormed the main stage with a rainbow of confetti cannons, new lyric visuals, wicked synchronized lighting and a full band. Before he began, he asked everyone to lie down and watch the stars. Then he played from Ephemeral while he crowd-surfed on an actual surfboard and floated over the audience in an inflated bubble. I love that every Rich set is different. Subtle variations in each song over time create such unique experiences. Everyone lost their minds and danced forever.

Night turned to morning and I ventured from the artist’s camping area into Tent City, the general camping grounds atop the hill. By Day 3 of Evolve, Tent City becomes a microcosm of society with its own neighbourhoods, marketplaces and a visible sense of community. Overall, it feels safe and inclusive.

At mid-morning, New York performance artist and YouTube star Matthew Silver proselytized from the main stage. It was disorienting. His lessons to “dream,” to “create” and to “live free” were heard for miles.  At one point, he showed his penis and sound-tech Tynan Dunfield (Vogue Dots) asked me when it might be considered indecent exposure. “I think probably 10 minutes ago,” I replied. Silver then stuffed his one-piece bathing suit full of confetti, stage-dived into the crowd and was carried off into Tent City.

I spent the rest of the day wandering the grounds, eating curry chicken, learning about Texas with members of Calliope Musicals and swimming in a river. Before the Rich Aucoin Party Bus (our rented minivan) hit the road, we watched Brooklyn's Moon Hooch, fresh from the Halifax Jazz Fest, in the early evening sun. They were so killer with duelling avant-garde saxophones. So much fucking wind!

As we drove back to Halifax, I realized Evolve is such a diverse collection of weird, interesting people who are excited to proudly be themselves for a few days. I wasn’t dressed as a flamingo or flashing my boobs around, but I sure as shit didn’t feel any judgement. I felt very welcome; Evolve offers a rare kind of freedom. The artist hospitality and crews are amazing and organizer Jonas Colter obviously believes in the transformative power of music. Evolve Festival really can change you and I hope it lasts forever.