Halifax’s Green Drinks hopes to get local activists together to talk environment and sustainability, over a couple of cold ones. 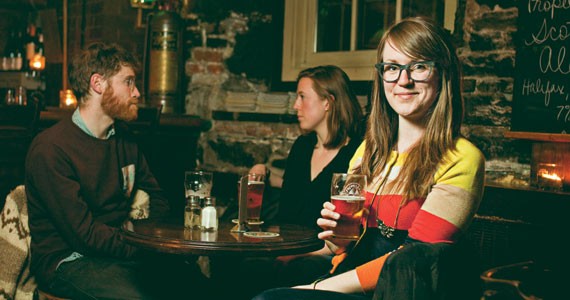 "You're passionate about your work, you truly believe in it, and it's a very long uphill battle," says Courtney Morrison, the 27-year-old who plans to bring a little more attention to Green Drinks. "It's frustrating and exhausting."

Morrison attributes this exhaustion to "activist burnout"—a considerable concern among people working within the environmental sector. She says that "people just get too exhausted to be passionate or personally invested in it [anymore]—you hear so many 'NOs' when working on these projects."

Popular on the west coast, Green Drinks is a monthly, informal get-together over drinks to discuss the environment and sustainability.

In 1989, international coordinator Edwin Datschefski hosted the first Green Drinks at the Slug and Lettuce in North London. It would later make its first Canadian appearance in Vancouver in February 2005, and Halifax followed shortly after in June.

Morrison discovered Green Drinks in Vancouver, where she lived before moving back to Halifax. Taking the position as co-organizer in February 2015 in order to help bring more attention to the event, Morrison was inspired to establish more community within the environmental sector here.

She hopes that by revamping Halifax's Green Drinks online presence and making sure that all information online is consistent, it will garner more notable attention. "Halifax has a really awesome network of really incredible people, doing incredible things. To see how many other people are also passionate about similar things, I find that really recharges my battery," says Morrison.

With Halifax's community of student activist and environmental programs, she says, it is important to bring like-minded people together under the same roof talking about their interests and work.

"Sometimes really formal networking events can be really stressful," says Morrison. "It's nice to have a really laid back option...a lot of cool opportunities can come from that."