Where I work: Quake Matthews

Gearing up to release his latest album Rap Music, Quake Matthews lets us in the studio. 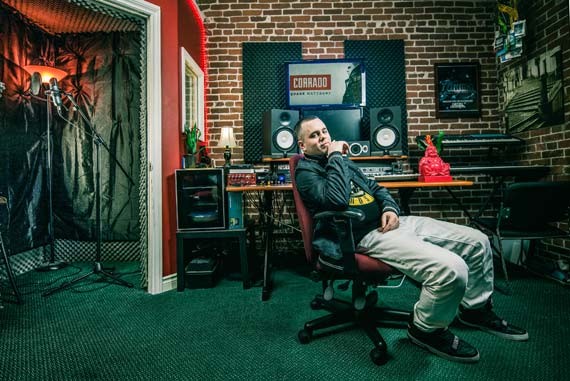 WHO HE IS
After his rise as a battle rapper, Quake Matthews has been grinding since his 2010 debut, The Myth, laying down tracks with everyone from Laura Roy to Dylan Guthro to Neon Dreams, working with Freeway, appearing in The Source and putting out The Book of Matthew and Corrado. On Friday, the King of Fairview returns to his element on fourth record Rap Music: "I wanted to go back to the vibe of my first album, when I was way more raw and hungry."

WHAT HE DOES
After a national tour with Classified, Matthews started working on Rap Music with producer Corey LeRue, taking time to craft the album's aggressive attitude and sound. "There's a few songs that we built from scratch and a few beats that we hand-picked," he says. Rap Music features tracks with locals Guthro, Ria Mae and JRDN, New York's Amani and bars from Ghettochild. "There's a lot more not-give-an-F attitude on this," he says, "There's braggadocio stuff, there's controversial stuff, there's some fun stuff, but it always has the deep stuff. That's the stuff I do."

WHERE HE DOES IT
Matthews and LeRue posted up in the booths of TMG Entertainment on Barrington Street: "It's like a family atmosphere where there's, like, 10 to 20 people here at all times. It's good if we want to add a vocalist, or bounce ideas off each other, always with constructive criticism and the opportunity that comes with having more than one person around."

WHAT'S NEXT
Matthews plans to turn up The Carleton for the release. "It'll be crazy compared to what usually goes on there," he says, adding that he's invited special guests like DJ IV and will have swag for sale with the album's artwork by Matt MacKay. He says there's an energy around Rap Music that comes from its authentic feel. "I always want to be conscious of what I say and have messages, but there's times when I just rap like I'm still that 15-year-old kid."