The Halifax poet laureate collects her spoken word creations in a new book, Live From the Afrikan Resistance! 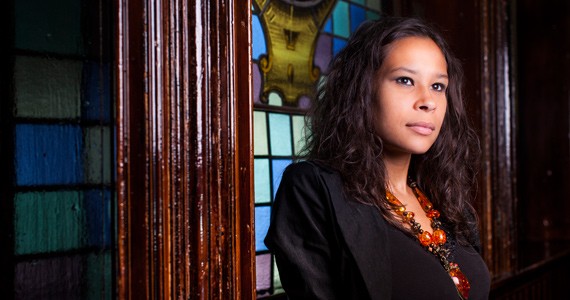 Riley Smith
El Jones is so committed to spoken word that some of her poems were never written down until text was needed for her book.

El Jones stands in front of a banner that reads Black Lives Matter. Her left hand is raised in a fist. Her right holds a mic into which she chants:

Malcolm, Huey, Angela, Assata
Dead, prison, exile, murdered
Revolution, protest, programs, marches
Can you live up to what they started?
What do you feel in every beat of your heart?
Black power
Now say it with me

"Black power," the multiracial crowd calls, their fists in the air.

Jones, a regular at Halifax anti-oppression protests, performed her "Black Power Poem" at the August 19 rally in Halifax for black teen Mike Brown, who lost his life in Ferguson, Missouri when a white police officer shot him. She includes the poem in her new book, Live From the Afrikan Resistance!, a written spoken-word collection meant to empower and educate readers, especially African Nova Scotians. Published by Roseway—the literary division of Fernwood Publishing—the collection launches with a Company House reading Thursday evening.

At the Ferguson rally, her poems elicited claps and cheers from a diverse crowd, but the voice of Halifax's poet laureate wasn't always so widely appreciated. Seven years ago, Jones, then new to Halifax from Wales via Winnipeg, was confined to page poetry. She listened to Lauryn Hill and Kanye West at the time and didn't know what spoken word was. Then two events in one week changed her path.

The first was a dream. While she slept, an oral poem came to her fully formed for the first time. She awoke with it in her head. "A gift from the poetry gods," she says. The poem, "White Neighbours," was about her experience growing up in a white area where double standards existed. She remembers: "A line in that poem was like, 'Someone called me Paki, they weren't even good racists.'"

Next came the performance. A day or two later a friend asked her, "How come you never come to poetry night?" Held at Ginger's Tavern on Barrington Street back then, Word Iz Bond was a monthly slam poetry night. She performed her first oral poem off a page at Ginger's. The audience loved it. She noticed other poets had memorized their work so she began doing the same.

Today all Jones' poems are in her head. She had to type them out for the book, in fact. The collection brings together her "so-called militant" early poems alongside more nuanced yet unapologetic recent work.

"Obviously we go on political journeys, our decolonization journeys, so I'm not saying everything in that book is necessarily something I would say now, but it's things I meant and said over the years, and those are also important for young people, that it is a book that you especially want young black people to read."

Jones is not out to write complex, award-winning stanzas that will find their way into a curriculum. Her poetry is for a 13-year-old, or someone without access to higher learning. "That's very important. That's what spoken word does, it provides education."

If not for their potential to educate and empower, she might not have published her poems in a book at all. "I was very reluctant in a lot of ways to do a book, because I have always been more about spoken word being oral, being ephemeral. I think the power of spoken word is that it takes place in the moment."

There's a power to doing a poem at the Ferguson march—a stage presence and feeling of immediacy you can't get from text. "Because you're writing orally, it's not necessarily meant for the page." For that reason, she left some poems out.

"Like, I don't want to put 'The Pussy Poem' in a book, I think that's more of an oral poem," she says with accidental humour, and laughs. "That's a gross double-entendre," she says.

Rather than attempting to curate a best-of poetry selection, Jones filtered the collection by topic. Readers won't find strictly feminist-related work, for instance. Instead, everything fits under the umbrella of black perspective. However, the idea didn't come to Jones until she saw the book's cover. Artist Obsdn Optimo painted a mural of black historic figures while listening to a selection of Jones' spoken word poems. Once the poet saw his mural, she knew the book should be about black experience, and the African Nova Scotian experience in particular.

Recently, as part of her work teaching in prisons, Jones performed "The Black Power Poem" in a Truro church with prisoners present. Her message to them was: "If Malcolm X can do this, you can do this." She could see them feeling it as they mirrored her fist in the air, she could hear their empowerment in the call and response, and she realized: "That's why I'm writing this."