Eight bartenders face off at The Middle Spoon’s Blind Barman, a cocktail competition that’s all about taste. 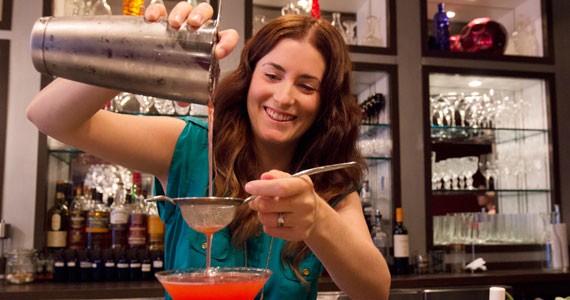 Vodka, bourbon, Scotch whisky, tequila, Canadian whisky, rum, gin and brandy. Those are the eight liquors that eight bartenders will be competing with at the Blind Barman competition at The Middle Spoon on August 25.

Ciaran Doherty, one of the owners of The Middle Spoon and its downstairs speakeasy, Noble, is excited for the competition.

"When it comes to cocktail competitions, there are always so many different moving parts that go into judging a cocktail," he says. "We wanted to kind of have one that focused mainly on taste.

"Even though we still think all of those other elements of judging a cocktail are important, we just wanted to shift the focus a little bit," he says. "Since we have the kind of unique dynamics—with Noble downstairs and The Middle Spoon upstairs—we figured that what we would do is sequester the bartenders inside of Noble, have them create a cocktail and then serve it to the guests in The Middle Spoon blind. They won't know who made it, won't know the thinking behind it and it will really just come down to their own individual perception of the cocktail."

The eight bartenders, a group made up of a number of the Middle Spoon's crew, along with other local mixologists, like Andrew Campbell and J.P. Angelopolous, who both competed at last year's Halifax qualifiers for the annual Made With Love cocktail competition.

Unlike Made With Love, the competitors in the Blind Barman competition will have a very stringent set of rules to adhere to in order to conceal their identities. "They'll be asked to surrender their cell phone and that type of stuff at the start of the competition so that they aren't texting their buddy upstairs saying 'Hey, I'm drink number three,'" Doherty says.

It's not a total black-box competition: each of the bartenders will have the list of featured spirits along with a list of different juices, syrups, garnishes and other support liquors that they can use when crafting their cocktails for the night. But it won't be until that night that the find out which spirit they have to use.

With all of the prep done in the shadows in Noble, none of the customers will know anything about the drinks when they make it to the tables upstairs. So the judging—which will be done by those customers—will be on taste only. "It's not that we don't think the presentation and the thought behind the drink is important, we just wanted to something where it removed it," says Doherty.

"I think that subconsciously we all bring our history with us," he says. "I'm probably guilty of it, too. That's just a human element of things; you pull for your friends."

The influence of presentation doesn't necessarily run as deep as friendship, though.

"With guys like Jenner [Cormier] and Jeff Van Horne," Doherty says of Noble's former head bartender and The Bicycle Thief's current bar star, "it's such a passion for them. And when they start to explain the thinking that goes into their drink, you develop an appreciation for it as you're drinking it. They'll start to talk to you explaining 'It should start off sweet and move to sour' or 'I used a rosewater rinse on this one because Hendricks is infused with rose petals so it brings that flavour out in the gin."

Without those hints, Doherty thinks it will be a unique challenge for cocktail fans. "It will come down to individual perception," he says. "Hopefully it will start a conversation about cocktails."