Alert the Medic ring the alarm

Alert the Medic release its latest album, The Phantom Moves, this Saturday 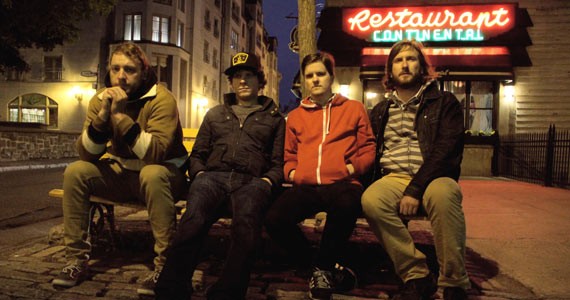 Hi, Alert. Your heroes called and they all want to work with you.

When we're kids, we dream big. We want to be astronauts, world leaders, rock stars. Most of us grow up and settle (happily or not), for something a little more realistic, a little less fantastic. But what if we didn't? What if, through a magic combination of hard work and good luck, we actually get to do the things we always dreamed of? When Alert the Medic's singer-guitarist Ryan MacDonald talks about the band that he and some childhood friends formed in 2006, he still has a hard time believing that these small-town guys find themselves where they are today. "We're hanging out after a show and I kind of look around and go 'How did I get here? Why am I talking to George Stroumboulopoulos right now?'"

MacDonald and bassist Matt Campbell have been playing together since they were teens, with drummer Dale Wilson joining them from nearby Sunnybrae. With the addition of Troy Arsenault (the lone New Brunswick transplant) on guitar in 2008, Alert the Medic started to shape up into the dynamic group it is today, and those moments of extraordinary success and just plain cool moments began.

"Cool shit just keeps happening!" says MacDonald, laughing. "In 2008 we opened for Our Lady Peace in Sydney at Centre 200. It was like our first arena rock show, which was a dream come true, obviously. Last year this TV show called Rookie Blue used one of our songs on an episode, which made us go 'Holy shit this is cool.' I mean, we never thought that was gonna happen." Given how much time the band has spent playing across eastern Canada, recording between tours, though, it should come as no surprise that folks from all over are taking notice.

It's certainly not just bands they grew up on, or television producers, taking notice, either. After the release of the Medic's last studio album, 2009's We, The Weapon, the band struggled to secure the time and funds to record another. Relief came in the fall of 2013, when a FACTOR grant arrived, allowing the band to head to Toronto to finish The Phantom Moves, which it's releasing this Saturday at the Seahorse. As if the infusion of cash (which MacDonald calls "basically a gift from the heavens") was not enough of a boon, the band soon found itself recording at Toronto's Pocket Studios with Mike Turner, formerly of Our Lady Peace.

"We always looked up to these guys coming through," MacDonald says. "You see them on MuchMusic and stuff and then finally one day you open for them. Then, suddenly that guy is producing our album!" Working with Turner was another of those "is this real?" moments for the band. "He's telling a story and it's like yeah, I know, I was there in the audience, when you did that! Sometimes I would look around, and I couldn't believe we were there."

After all of these years of hard work and general "little gift" moments, the band is excited to return to the Seahorse to release The Phantom Moves and party with its adopted hometown crowd. MacDonald promises that "you're going to see a really energetic show, you're gonna see four guys who obviously love playing together and love what they're doing." Sounds like a big gift to me.