But Blair Cromwell won't be offered his job back.

Last Thursday, the Halifax Association of Black Firefighters and the Halifax Regional Fire and Emergency Department officially buried the hatchet, effectively setting aside a human rights complaint the black firefighters had filed against the department.

As The Coast detailed in 2009, the black firefighters' complaint cited a series of racist incidents dating back to 1996 and continuing right up to that point.

The relationship between the black firefighters and the department was acrimonious, but took a decidedly better turn after former chief Bill Mosher retired and current chief Doug Trussler arrived, in 2011.

"It was my very first order of business," Trussler tells The Coast. "We're going to address that human rights complaint."

By all accounts, Trussler has presided over a sea change in racial relations at the department, which started an 18-month series of meetings cumulating with a "reconciliation circle" Thursday at the north end YMCA. Present were members of both HABFF and the recognized union for the department, Halifax Professional Firefighters/International Association of Firefighters Local 268, as well as representatives of the department, city legal and human resources staff and from the Nova Scotia Human Rights Commission.

There, Trussler read an apology to the black firefights. This was part of a broader agreement that also involved the adoption of a restorative plan by the city and the dropping of the human rights complaint by the black firefighters.

At the circle, each party of the circle spoke at length about repairing relationships and moving forward with a better understanding of the issues at play in the past.

The truth and reconciliation process is becoming increasingly important in Canada, perhaps best illustrated by the Truth and Reconciliation Commission of Canada, which held hearings in Halifax to detail the wrongs committed at the Shubenacadie Residential School. The foundational premise of the process is that the wrongs of the past have to be named and detailed, before victims and the society that has wronged them can build a more just relationship.

Trussler's apology was certainly heartfelt and welcomed by HABFF, but it hits nowhere near the level of detail found in most reconciliations. It relies on weasel phrases like this:

When allegations of poor treatment were brought forward by individual firefighters and the Association of Black Firefighters, the allegations were not addressed as effectively as they could have been; allowing old hurts to reopen instead of heal.

In any fire service, the standards of behaviour are established at the top of the chain of command. I apologize for our failure to bring a swift end to any discriminatory behaviours you experienced in the workplace.

It contains a vague nod to "allegations," not enumerated. The "top of command" is mentioned, but Mosher's name not used, and Trussler declined to elaborate when asked to by The Coast. In total, the apologize comes off with a bit of a "I'm sorry if you were offended" feel.

Of course, it's not up to newspapers to decide these things. The black firefighters themselves accepted the apology and clearly want to move on, continuing their jobs and setting the bad blood with the department behind them.

Still, there's one black firefighter who feels re-victimized by the reconciliation. 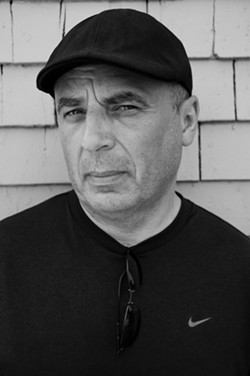 Blair Cromwell
"They threw me under the bus," says Blair Cromwell, who made anonymous comments about fire department brass on The Coast website. The city paid for the legal expenses of Mosher and deputy chief Steve Thurber, first to get a court order to require The Coast to turn over IP addresses related to the comments, then again paid for Mosher's and Thurber's libel suit against Cromwell, which continues in the courts. In the process, Cromwell was fired.

Cromwell says now that originally the HABFF agreed not to settle their human rights complaint unless Cromwell was hired back into the department.

"I know Blair feels bad," said HABFF rep Ray Adekayode Thursday. "But there's nothing we can do for him."

Chief Trussler declined to discuss Cromwell with The Coast, but acknowledged that Cromwell will not be offered his job back.

There seems to be a double standard at play. Trussler's apology makes vague reference, no doubt vetted by city lawyers, to problematic actions at the "top of the chain of command," but the specifics of Cromwell's past sins have been enumerated in enough detail to first get him fired, and now un-re-hirable.

"Racism is violence," says Cromwell, and certainly the various targets of racism are going to respond in different ways, some more "acceptable" to the racists than others.

This part of the reconciliation is awkward, and mean-spirited. Now that the apology has been issued, at least obliquely acknowledging past racism towards the black firefighters, including against Cromwell, it's as if the city and the department are saying to Cromwell: "your response to our racism was unacceptable."