The long road to Osheaga 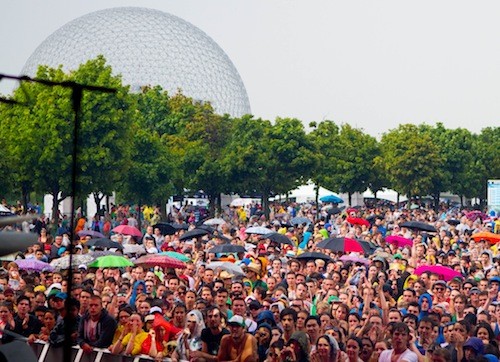 Pre-Day
14-hour drive from Halifax. Many stops in New Brunswick. Unsure if this is due to the size of the province, or the size of our convoy’s bladders.

Day 1
Osheaga is a wonderland for music lovers; stages share space with shady areas full of couches for lounging. We catch The Jezebels and Dum Dum Girls at the Tree Stage. Both bands sport carefully coordinated black outfits that, surprisingly, don’t seem out of place in the hot daylight. 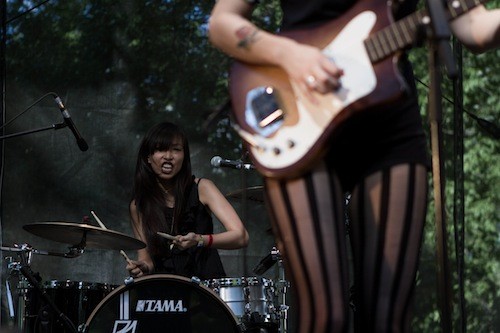 Dum Dum Girls’ front-woman Dee Dee is understandably pissed that their set is delayed and thus cut-short, but it doesn’t show in their performance. The girls icily set up their own equipment, check their sound, and don’t break a sweat. Too cool for school. 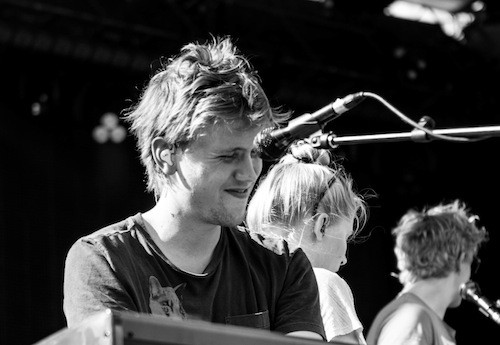 Of Monsters and Men, I’d been hearing rumblings of this band, but few details. To summarize: Indie-folk rock from Iceland, obviously love what they do. Big sound, big smiles, big fun.

Encounter several people swimming in the river. They seem jubilant and carefree as security pulls them from the off-limits oasis. I enjoy the look on their jubilant faces and security informs them the water is full of used needles. A stop to refuel batteries and my stomach leads to a run-in with a few people from Halifax Pop Explosion, and we find a foozball table big enough for eight. Good afternoon. 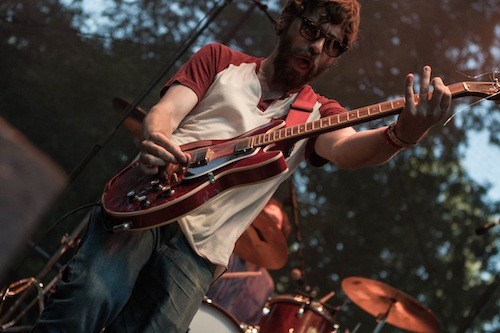 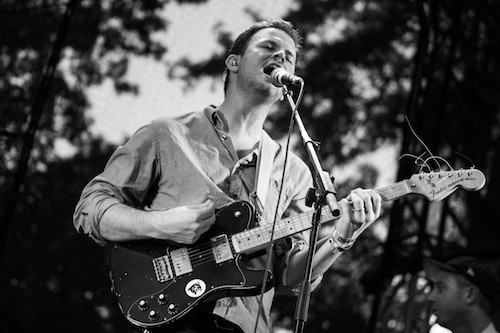 My love of Florence and The Machine is not enough to make it worth the crowd. I go an hour early, and am at least a mile back from the stage. I happily take in some of Wintersleep, and then catch Flo on the big screen. Good compromise.

Late night finds us hunting for an elusive bar where Spoon singer Britt Daniel’s other other band, Divine Fits, is playing. We arrive in time to catch the last 20-seconds of the last song. Patrons tell us it was the best show they’ve seen in awhile. Shit.

Day 2
Late start due to breakfast order being forgotten at local diner. We make eggs at home, all is forgiven by the time we arrive for Black Lips. If we weren’t awake before, we’re awake now. Guitarist Cole Alexander vomits on stage while continuing to play. Could be due to the heat; doesn’t look pleasant. Looking forward to Black Lips appearing at Halifax Pop Explosion this Year. 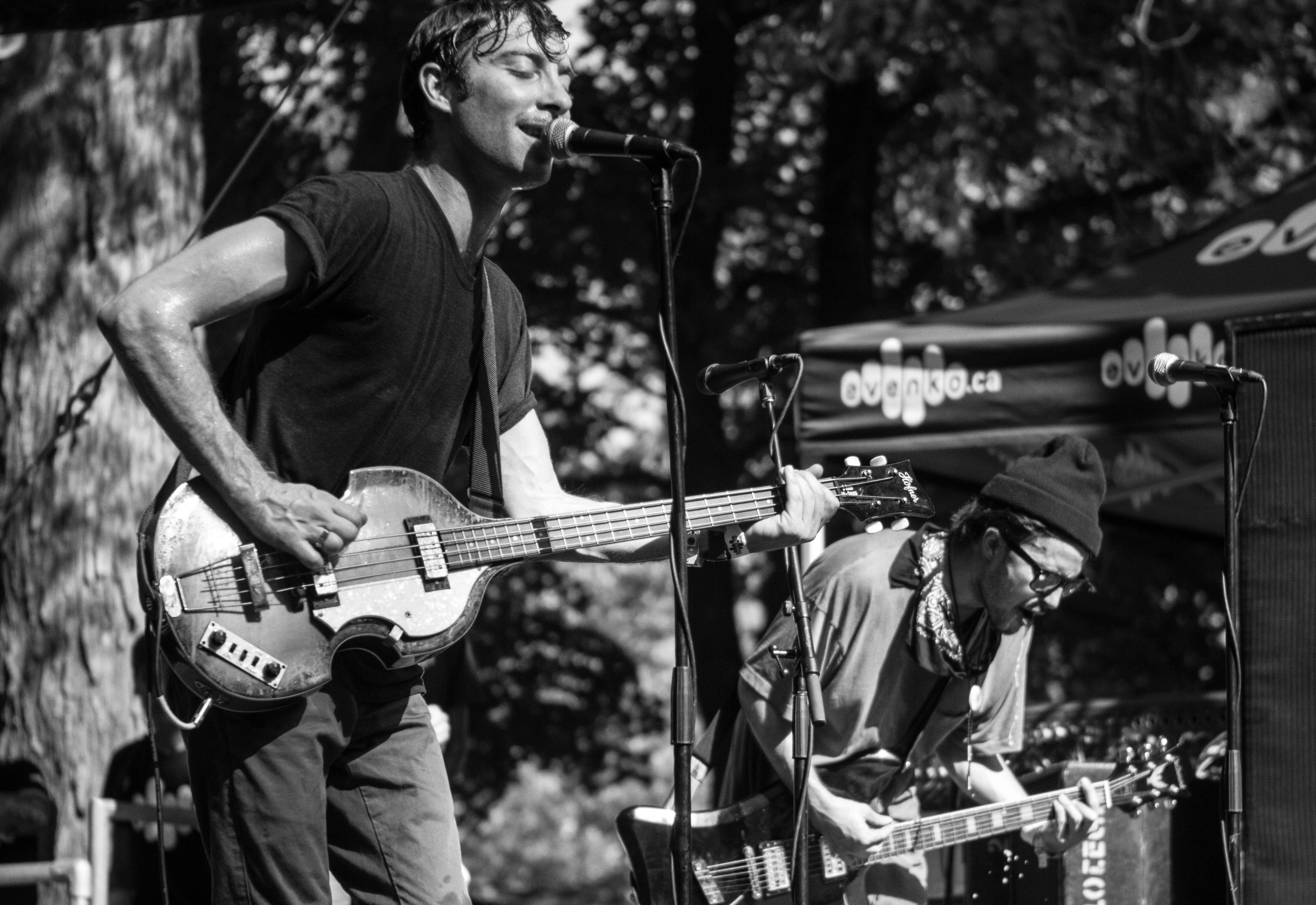 The Raveonettes play the Green Stage, which isn’t as busy as it should be for this Danish duo/trio. Security at the front of the stage make use of water cannons to spray down the melting crowd. I am happy; my camera-gear less so. 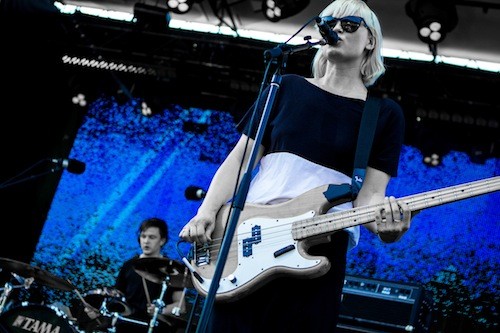 Scottish alt-rock legends Garbage hits the main stage. Singer Shirley Manson prowls the stage while thanking the “true Garbage fans” in the audience. “For those of you who know us, and have asked us to come here, we are Garbage! For those of you who don’t know us, then I guess we’re still just Garbage.”

Feist is a festival highlight for many; she creates a gorgeous four-part harmony with the audience, separating them into Francophone, Anglophone, bilingual and non-Canadian. The crowd of revelers stays on key quite well, and magic is made.

The arrival of Snoop Dogg/Snoop Lion heralds comparable security to the G-8 summit. We’re shoved asked to step behind yellow tape and told not to move. After 30 minutes of waiting I think I’d rather get a beer and watch the screen. I don’t think I miss much. There are gyrating dancers and a lot of weed. No doubt a fun time, but I notice Mr. Snoop doesn’t really say too much for someone with a microphone in his hand.

After escaping the island we catch a late after-party with k-os DJing. If a DJ’s job is to get butts on the floor, he’s done all right. Near the end of the night the computer cuts out, and during the quiet there are chants and calls for him to rap, sing, do his own thing and I have to wonder—with a new album coming out, why aren’t we seeing him in all his glory?

Day 3
Dan Mangan starts the day off on the Mountain stage to a packed crowd singing along to almost every song. One lucky kid with a box on his head gets pulled up on stage during Dan’s signature "Robots" sing-a-long. Drummer Kenton Loewen deals with some gear issues as his bass drum tries to fall over, but never loses a beat. 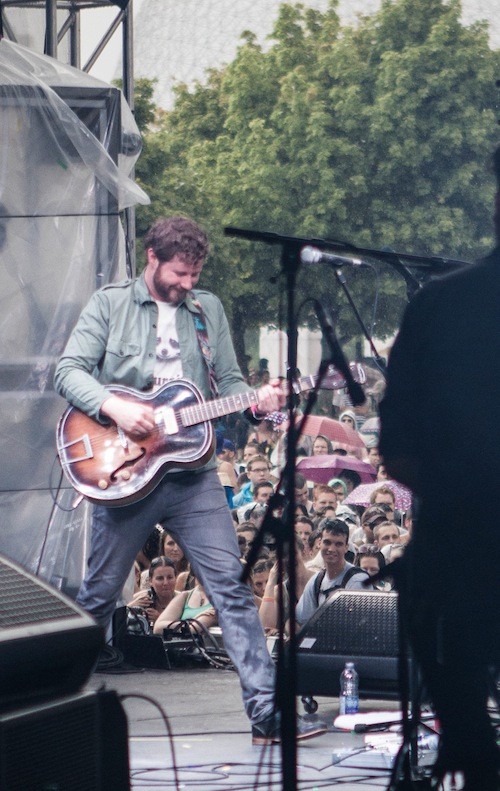 Tame Impala’s time slot is swapped out with Passion Pit. After some time off we’re not sue what to expect from singer Michael Angelakos. The set is a little more low-key than previous gigs, but still a full ride of energy as they play through rain/sun/rain/sun. The lineup change throws a small wrench in everyone’s schedule, as there’s too much to hear.

James Vincent McMorrow walks the line of singer-songwriter and folk-rock, finding a perfect blend of rich lyrics in the tides of mandolin, guitar, and harmonies.

The Shins, City and Color and Metric all play through the return of the rain. The crowd shows their true colors, staying put in colorful ponchos, umbrellas and garbage bags. 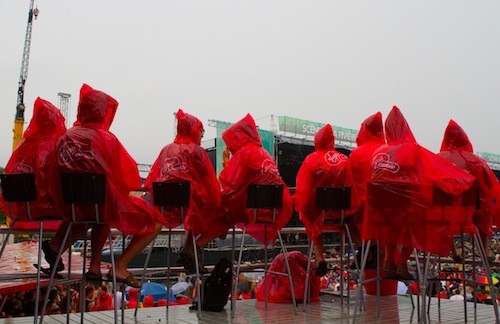 Metric brings a mix of Synthetica and old favorites to the stage. Emily Haynes frayed jacket barely stays put as she stomps the stage and consumes the crowd in energy.

At the end of it all there was too much to see. But we will return next year, if not for the music, then for the dinosaurs. 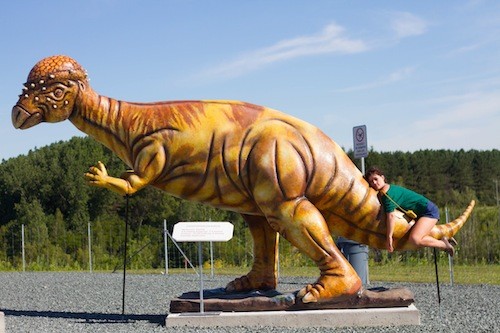