In search of the sacred underwear | The Coast Halifax

In search of the sacred underwear 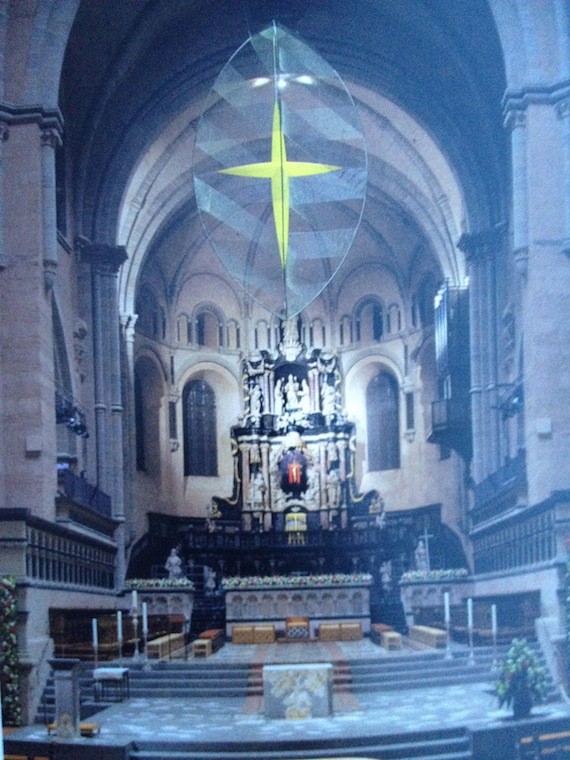 My European vacation brought me to Bielefeld, Germany for a few days (more on that later, perhaps), and then I had the idea to visit Luxembourg, Belgium and The Netherlands.

But, looking on line for a hotel room in Luxembourg, I decided that city was simply too expensive for an overnight stay. Instead, I looked at towns up and down the train line. Arlon also was too pricey, but on the German side of the border is Trier, with several affordable hotels.

Trier is the oldest German city, founded by the Romans. More recently, Trier is birthplace to Karl Marx. That’s basically all my travelling companion and I knew about the town when we pulled into the train station.

But, it turns out, the Trier Cathedral is an impossibly old place that was gifted in the 4th century with the supposed robe of Jesus. A pamphlet provided at a tourist kiosk explains:

When the soldiers had finished crucifying Jesus, they took his clothing and divided it in four shares, one fore each soldier. His undergarment was seamless, woven in one piece from neck to hem, so they said to one another, “Instead of tearing it, let’s throw dice to decide who is to have it.”
Gospel of St. John 19.23-24

[...]Saint Helena, mother of the Roman Emperor Constantine (himself resident in Trier during the 4th century), is said to have uncovered the relic during her pilgrimage to Jerusalem, and donated it to the church of Trier on her return.

Back in my college days, I wrote something about the relic trade of the early church, about how various sacred vessels and body parts of saints and the savior (there were something like 47 foreskins of Jesus bouncing around Europe) were used to link far-flung churches to their distant bishops, and how the relics played an important role in pilgrimages and the development of commercial networks.

It goes without saying that it’s impossible the piece of cloth laying beneath the altar in Trier is actually the Lord’s underwear. I see used underwear for sale at Value Village sometimes, but there’s definitely an ick factor; sure, maybe some Roman soldier ponied up some cold cash for some skid-marked undies, but it stretches the imagination to think that the thing would be passed on, being worn by one generation after the next, for 300 years. I’m lucky if my Stanfield’s last a single season, and I haven’t been riding around on donkeys or hanging out in the desert debating the devil for 40 days; no doubt Roman linen weavers were skilled, but they couldn’t possibly be that skilled. And don’t even get me started on the 1,700 years that have transpired since.

“But they’re holy underwear!” pointed out my partner. I ignored the comment and ordered another biere.

But it’s a good story, this holy underwear business, and the powers that be have got good milage out of the tale for five centuries. As the tourist brochure explains:

In 1512 the German Emperor Maximilian I made a formal visitation to Trier. At his command, the Holy Robe was removed from its place of safety under the high altar and put on display. As word of this spread amongst the general population, pilgrims flocked to the city wishing to see the Robe for themselves, and this spontaneous “People’s Revolution” formed the first official public showing.

Ever since, whenever the Trier economy needs a shot in the arm, the town pooh-bahs convince the bishop to trot out the sacred skivvies, and here come the throngs of tourists to keep the merchants happy. In the last century, the underwear was put on display three times, in 1933, 1959 and 1996.

Fast forward to 2012, and like the rest of Europe, Trier is in permanent recession, still reeling from the Great Banker Heist of 2008 and the austerity regime of Disaster Capitalism. The 500th anniversary of Maximilian’s display of the undies provided a good opportunity to gin up some tourists, but even the pooh-bahs understand that, for better or worse, other than the dozens of rosary-clutching nuns clambering up and down the cobblestoned streets, nobody much believes anymore in Catholicism, much less that the actual 2,000-year-old underwear of the Lord is stashed under the altar at Trier.

The pooh-bahs solution? Heilig Rock Wallfahrt 2012. Best I can tell, Heilig Rock is a sort of cross between Woodstock and Mecca, a horribly misconceived mixed message of messiahs and metal rock, with drum kits set up on stages surrounding the cathedral. The tourism promotion people were evidently desperate, but nobody wants to be beautiful and stoned while contemplating Jesus’ underpants. 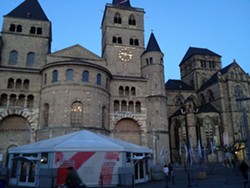 The crowds at the Trier Cathedral were underwhelming.
Admittedly, I was in Trier for less than 24 hours, but from what I saw, Heilig Rock not unexpectedly wasn’t a huge success for either the Christians or the Capitalists. To be sure, the Cathedral was full for the evening service, and there were lines for morning viewing of the unmentionables, but the lines weren’t long enough to snake through the velvet rope maze set up for them, and the porta-potties were remarkably clean and available---it was clear that much larger crowds had been anticipated.

As for the merchants, the Burger King and Subway had the predictable tables full of acned adolescents, but nobody with real money to spend, and the faux Louisiana cuisine restro a block from the cathedral was able to serve us in under an hour, which is to say rocket speed for the German hospitality industry. A nearby table of soccer fans half-heartedly sang an anthem to their team and downed a shot, before silently admitting their heart wasn’t in it and calling it a night; neither holy underwear nor the prospect of unbridled hoodlumism was enough to keep late-night Trier hopping.

After the surprisingly adequate Louisiana cuisine, we went back to the Hotel Handelshof, a nice place with clean rooms up above Rick’s Restaurant, a beer garden-ish spot that attracts a mix of hotel guests and neighbourhood folks. And the neighbourhood is decidedly blue collar, with just a hint of desperation among the down-scale strip clubs, hookah bars and beer joints shoe-horned into the small storefronts along Karl Marx straße, a narrow lane that stretches two blocks westward from the Handelshof.

Oddly, the Karl Marx Museum, which occupies the house Marx was born in, isn’t on Karl Marx Strasser, but rather a half-block up Brückenstraße. That night we stumbled upon a window display next to a skateboard shop a few doors down from the museum: It seems the Marxists have used the official sanctioned relic-viewing to put on a tongue-in-cheek campaign of their own, celebrating the supposed discovery of Marx’s underwear: “Im namen der hose!” screams a magazine cover detailing the campaign: The next day, we made sure to visit the museum proper, spending a couple of hours among the exhibits, which provide a nuanced biography of Marx and a pretty good overview of how Marxism has affected the world.

The Karl Marx Museum
While we were there, a camera crew pulled one of the museum directors down the road, to interview him before the hosen window display.

I don’t know that this is particularly profound or anything, but it looks like the only people in Trier to profit off Jesus’ underpants are the Marxists.